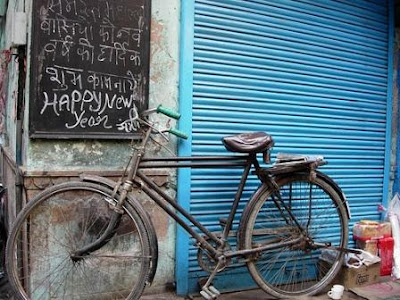 We have been in the Mumbai area since late 2001 now. Among the many culture shocks I had when coming here as an adult (and that too straight from Jharkhand) was seeing my East Indian neighbours squeezing packets of bread to choose the softest ones (leaving the slightly harder and well squeezed rejects for the next customer). Today I squeeze away too.
.
When we got here the price of a loaf of bread was 7 rupees. Yesterday the latest increase brought that up to Rs. 13. Almost 100% inflation over 7 years according to the Eicher bread index.
.

We don't even see 25 paisa coins any more. As I rediscover my childhood hobby of coin collecting (in the guise of 'Asha's hobby') - it is sobering to think that there just don't seem to be any coins left. Even 50 paisa coins are rare with most products now priced only in rupees. It is said that the metal in the 1 rupee coins is now worth more than the value of the rupee - and that in eastern India folks are hoarding them and smuggling them to Bangladesh where they are made into shaving blades!
.
An article I read recently compared the lives of a family living in an appartment - with that of their maid living in the slum next door. We fit roughly into the category of the former. The line that really knocked me out was that the appartment dwellers income had increased 5 fold in the past 8 years. That is way, way ahead of inflation. At the same time, though the article did not say so, the wages of the maid will hardly have done so.
.
With our burgeoning middle and upper classes creating an almost insatiable demand for goods and services - we forget the poor and not so well off. The sad looking watchmen at our appartment building - for example - who are rotated regularly by their employment agencies. Contract employees they officially get Rs. 2000 per month for 7 days of 12 hour shifts.
.
A Rs. 1 increase for us in bread is not such a big loss. It adds about Rs. 20 - 25 to the monthly food bill. For our friends who work as watchmen it is huge. We will grimace a bit and carry on. What will they do as the cost of rice continues to rise? Will they borrow from others (sometimes at 10% monthly interest!) - or try and cut costs even more - or have a drink and try to forget everything?
.
We have had 13 solid consecutive years of a 'normal monsoon' - most of the monsoonal rains meeting most of India. We just need one poor monsoon to see many, many people who are on the edge of survival going over the edge. Though our local monsoon started with a bang - it seems to be on the whimper side of things now. I talked with Jagdish Solanki from Kedgaon yesterday and he said that they have not had any rain...
Posted by Andi and Sheba Eicher at 00:59