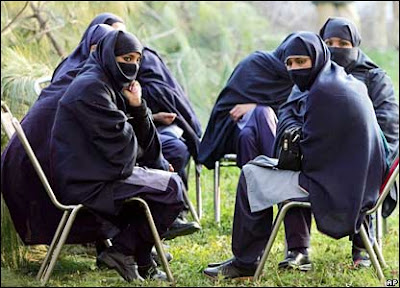 Our neighbours are sadly restive. As we look across South Asia - we see almost total chaos in Afghanistan and Pakistan (the image above is of Pakistani policewomen taking a break from duty) with an on-going Talibanised civil war going on there. To the South we see Sri Lanka throwing away any pretence of peace as the goverment feel they have the Tamil Tigers on the run. To the East the quiet military take-over of Bangladesh. To the North we have the Maoist republic of Nepal and the quiet conflict of Tibet / China taking place.

Where does this leave the great expanse of India? Naipaul says we have a million mutinies now. To an extent that rings true. The on-going insurgencies in Kashmir and the North East fit the bill. On republic day an army officer was given a gallantry medal - the next day - while his family was still celebrating in their home village - came the news that he had been killed in a fire-fight with the ULFA in Assam. The low-level warfare that dots most of the Maoist infiltrated areas of central India bear this out. The lumpen-criminalisation of vast swathes of the Gangetic plains. The powerlessness of the government to bring people to task for the numerous gruesome 'riots' between 'different communities' (read: Hindu and Muslims). All point to a deep and lasting decay in the fabric of our land.

And yet, living in urban Thane, all of this can seem strangely far away. The daily comforts of life, the media barrage of filmi-flingers and flannelled-fools, the pleasures of a semi-broad-band internet connection - suddenly the other India and our restive neighbours seem to belong to a distant dreamland.

How do we make sense of the big picture while remaining true to the here and now? How do we be world-citizens while also nurturing our local heritatge and involvement?

Jesus had some interesting contrasts. He attended marriages and funerals (though the recorded ones seemed to end in un-funerals) - he ate at special meals and wandered dusty roads - and yet while his interactions were often intimate and restricted to a small number of key followers - his words reached out farther. He headed to Jerusalem and cried over it and its fate. He spoke to his disciples in the present, but always had an eye on the future.

Our hope and prayer is that Asha and Enoch will be able to see our restive neighbours and our often fevered land be changed into the peace and tranquility we are all praying for. May they learn how to be both passionatedly involved in the local and here-and-now, while at the same time thinking and praying big. And may they learn this from their own transformed parents!
Posted by Andi and Sheba Eicher at 23:31