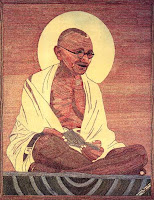 One of the better commentators we have is Pratap Bhanu Mehta. Today is the 60th anniversary of Mohandas Karamchand Gandhi's assassination. Here is how Mehta closes off his op-ed piece in the Indian Express:

But on the sixtieth anniversary of his assassination, it is difficult to shake off the feeling that he is revered more because of his absence than his presence. As with Munnabhai, his ghost occasionally haunts us, but the important thing is that it is only a ghost. His assassination allowed us to cope with him.

How jarringly true. The picture at the right is made up entirely of the word 'Ram' - the name Gandhi invoked even as he was dying. The picture comes from the US where a Californian Hinduistic commune has posted it as part of their inner healing. Despite the many 'Gandhis' that we see bandied about today - his essentially Hindu religiosity just cannot be extracted from him.

What struck me in Bhanu' s op-ed was realising actually how much Gandhi's death saved Gandhi from the ignomy of marginalisation (did anyone say 'Tony Blair'?). And how much our political climate today resembles the powerful Hindutva currents of the early 40s - which were subsumed by the embarrassed silence for a few decades as the 'Gandhi-killers' found the wind robbed from their sails.

On another tangent, here is what our dear friend Salman Rushdie said a few years ago in TIME:

Gandhi today is up for grabs. He has become abstract, ahistorical, postmodern, no longer a man in and of his time but a freeloading concept, a part of the available stock of cultural symbols, an image that can be borrowed, used, distorted, reinvented to fit many different purposes, and to the devil with historicity or truth.

In the end most of us really don't know what to do with Gandhiji - and so he gets invoked in every which way. In today's rememberences of him we have the irony of a solidier guarding his statue. And far more interest and column-space is given in the press to our robust cricketer Harbhajan Singh's slanging match with his Australian bete noire Andrew Symonds than in the shots that cut short the frail but intensely complex man that Gandhi was on a cold last day of January in 1948.

The best place for a troublesome person is to deify him. Our nation cares nothing about what Gandhi stood for. It should be pointed out that the complex tapestry of Gandhi's life doesn't provides much of a realistic - or even desirable way of life (there is only one person in history who can lay claim to have lived an exemplary life). But the irony is that our nation has disemboweled Gandhi and stuck him up like a trophy - with his saintly visage gracing many an official item - while we bask in the aura of Gandhism - without having to even act like anyone of us follows a whit of what he stood for.
Posted by Andi and Sheba Eicher at 21:39