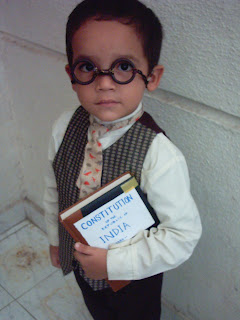 Dr. B.R. Ambedkar. Our first law minister. Freedom fighter. Contrarian. Visionary. The first Dalit to get a PhD in the US. Chairman of the Constitutional Drafting Committee. The father of the Indian Constitution.
Today Enoch was asked to come to school dressed up as an 'Indian National Leader'.
He went as Ambedkar. A man who purposely wore a western suit to set himself apart from other national leaders who were wearing khadi - the home-spun cotton that was used by many as a sign of swadeshi - of self-sufficiency and self-rule without the British.
Ambedkar said famously. 'I was born a Hindu, but I will not die as one.'
And he did not. He converted to Buddhism, along with a large proportion of the lower / outcaste followers that he galvanised.
Much has been made about why Ambedkar did not convert to be a follower of the Lord Jesus. There are many apocryphal stories. Including a story of 4 bishops trying to woo Ambedkar to their fold etc. Similar to stories that say that if only Gandhi had met a 'real Christian' (whatever that means) he would have become one... Only judgement day will really tell.
There is however an interesting claim made in a recent book by Arthur McPhee called "The Road To Delhi: Bishop Pickett Remembered". In it McPhee says that Ambedkar - who was a close friend of the Methodist Bishop J. Waskom Pickett twice asked Pickett to baptise him - secretly. Pickett refused.
The key seems to be the requested secrecy. Baptism is not to be done hidden - it is a public declaration of internal change within - and allegiance to the Lord Jesus. It seems that Ambedkar looked at the options - counted the cost - and sadly chose the trappings of power over following the wounded healer.
What will we be remembered for? As great a man as Ambedkar was - easily the man whose ideas and aspirations have the most powerful impact in the on-going experiment that our country affords - his true legacy will ultimately be measured not in centuries but in millenia - by the power of millenia. Strangely, in that calculus, the tiny acts of obedience of the littlest known follower of the man from Nazareth town take a greater weight than all the apparently world shaping acts of the powerful (even if they have come up from among the powerless).

I tell you the truth, unless you change and become like little children,
you will never enter the kingdom of heaven. - Mat. 18.3

Posted by Andi and Sheba Eicher at 08:24