Disturbing the Peace - some pictures 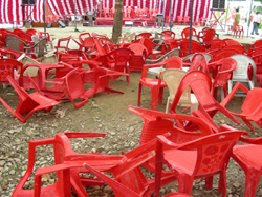 A few pictures to take us to the site of where the mob burst into the Hospital meeting in Eastern UP (see 'disturbing the peace'). These chairs were their for parents and children from village schools who were attending the prize distribution programme at the campus of Kachhwa Christian Hospital.

And now lets look at three men who were assaulted while trying to reason with the attackers. 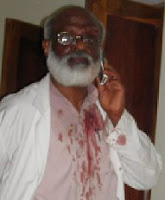 Dr. Raju Abraham had a stone thrown which made a deep gash just above his left eye.

A centimeter below and his eye may have been lost.

Pastor Joy (right) was also hit on the head.

Never nice to see blood like this isn't it?

Strange how shocking it is to see the red stuff that surges inside us - on the outside.

Brother Rajan was beaten with the plastic chairs for the function. 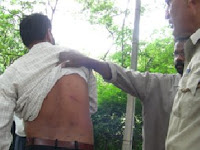 Those in power have made their point. They will not stop at anything - and will use their violence if need be.

Now it is the turn of the followers of the man who put turning the cheek into action, who lived his life as a gift to us, who was bruised and marred beyond recognition.

Are we going to retaliate?

Or are we going to pray for these men?

Do pray - and pray hard. We understand that a large meeting of men who are part of the various die-hard outfits met in a nearby temple and chalked out a plan to shut down all the schools. 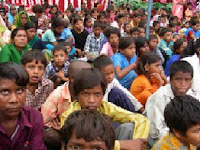 The question remains - what about the children?

Will any of these fine strong men - who are so happily shutting down schools - will any of them start one? Gather kids together and teach them? Mingle with those whom they have branded as human garbage?

See that you do not look down on one of these little ones. For I tell you that their angels in heaven always see the face of my Father in heaven - JC (Mat 18.10)

Posted by Andi and Sheba Eicher at 11:24