One of the most challenging and vexing issues we face is the tremendous suffering children go through.

Tonight so many have gone to sleep on an empty stomache. So many do not know what their next day will hold. So many are afraid of violence - in their own homes.

And that is while their parents are still alive!

A common response to finding out about one's HIV status is to think about what will happen to the children now.

Many parents come to us and ask us to put their children in 'hostels.' 'At least they will have a better life' goes the reasoning. Some parents already sent their kids to such orphanages.

A year ago we faced this challenge with two families affected by HIV and living in the same locality. Between them there were 8 children. Both families very broken.

One family was a recent widow with 3 children. The mother had just lost her husband who was leaching his government job - not having worked a day for 4 years his supervisor signed his attendance for him - they shared the salary 50/50. The kind of care this man gave his children was minimal. The bottle was a closer friend. The son would run away from school. Habitually. And loiter in the streets - as an 8 year old.

The other family had 5 children. Both parents with HIV. The father was also a friend of the bottle. His own mother brewed and sold alcohol in a nearby hut. The family - all 7 of them - had moved out of their shack - into a smaller and more muddy hut - in order to get some money as rental income from their bricked room. The father had already been on TB treatment - twice. The request was the same - 5 children who were going wild. Parents who wanted us to find a place for them.

We believe - that even though some of the situations are so difficult for the kids - that it is absolutely vital to keep them with their parents for as long as possible - and to help the parents really parent their children.

Last year we tried to do something practical about it. And started what we call the Child Care Centre. It started in the first family's little room. Varsha Mohite - the wife of our field social worker Rahul - plunged into looking after the 8 children. Each day they meet before or after school at the centre. Each day they get a simple meal. The children are helped with their home-work - are taught - are played with - learn songs - hear stories from the Bible - and are loved and looked after.

On the 3rd of July we celebrated a year of this on-going miracle. 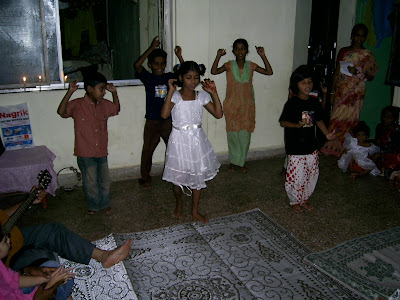 To see these children dancing and performing their plays was a wonderful sight.

To realise that the boy who had been truant every day now attends school regularly and even is often the first to come to a local church fellowship, while the door is still locked, is amazing.

To hear that one of the other girls came first in her class. And another girl has been made the head-girl of the school is a tribute to what God can do. 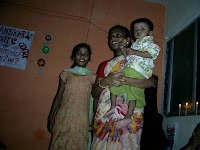 Varsha (seen in the picture carrying her son Nivedan) has poured herself into these children. Others have prayed. God has touched some very hard hearts and made them soft. The ongoing work in these kids lives will continue. They have been joined by an HIV positive boy and recently by the son of another man who is positive. Most of the boys have not had father figures to look up to. The growth and development continues/

We are grateful to Hoofriz Ross for the last year's encouragement of Varsha and helping us move forward with the Child Care Centre. We shifted it to a one room Hall flat early this year - where Rahul and Varsha now live - and have recently started a weekly meeting for local women who are infected or from families affected by HIV. The idea is to have it as a women's self-help collective - and a time for ministry to these dear sisters.

So we move forward with this in mind: Each child deserves to be loved.

We must see ways of helping whole families live together - and love each other. The kids of today are the parents of tomorrow. We must see churches opening up to include the children. New challenges await. New frustrations. New blessings.

Posted by Andi and Sheba Eicher at 23:09