Andi's mother grew up in war. The 2nd World War.

She spent three years away from her parents. Because of the Allied bombs that were falling on her home town of Leipzig, Germany.

As a six year old she was sent to be with her relatives in the country side - while her parents continued to live in the fear that their house would be blown apart by high explosives dropped at night by American and British airplanes.

It was only when she was 9 years old that she made her way across the destruction that was Germany at that time - and saw her parents again.

Needless to say toy guns were a no-no in the Eicher household.

Needless to say, guns were a great source of intrigue for young Andi.

Needless to say, when young Enoch builds a lego toy and tells his father excitedly that it is something used in war-time, the stomache tightens.

I ask: "What is it?" while looking at a long yellow protruding piece that looks suspiciously like the gun barrel of a tank. "Its a light - so that they can see at night" chirps Enoch...

Its been some days since Andi has heard gun shots.

The kind he heard in Churchandpur when a grenade was thrown at the Bihar regiment - and the soldiers went through town shooting.

The kind he heard in New Haven, Connecticut - the richest per capita income state in the US of A. When Andi heard fire-works - only they were not crackers - they were bullets in the drug wars between rival dealers for crack cocaine.

Could this be the land of the Free? 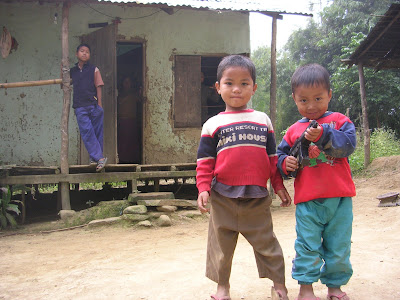 I was reminded of this recently by my calling our colleagues in Jharkhand. By mobile!

Asha's birth certificate had been misplaced. The school called up saying they would expel her if we did not produce her original one within a set time. I called up my colleagues at Nav Jivan Hospital to see if they could go to the village registrar and have another one made up.

The days crept by. The photocopy that I sent finally arrived there. Then it was time to badger the registrar (the Panchayat Sevak - "Village Council Servant"). "Yes, Yes, he will surely do it."

Then the Maoist called a day-long blockade. Everything shut down. Over there in Jharkhand at least. The Panchayat Sevak spent his day laying low. Did he watch old movies on a CD player? Did he watch the latest masala song-and-dance on TV? Who knows?

What we do know is that large areas of our country are still under the law of the gun. An 'underground' group here calls for a bandh (total strike) and everyone has to obey. A group of jungle-dwelling revolutionaries declares something else - and all the people have to put up with their demands. The permanently patrolling armed forces say something in another part of our Land - and the locals have to bow down.

All this while I go to the supermarket to buy frozen chicken. The package has the date printed on it - showing that it was slaughtered this morning - along with its weight and cost.

As we come close to celebrating our 60th Anniversary of Indepedence next week - spare a thought for how many are still under the gun - while the urban islands swim in butter.

Could this be the land of the Free?

Posted by Andi and Sheba Eicher at 23:46