What has two back bones and thousands of ribs? 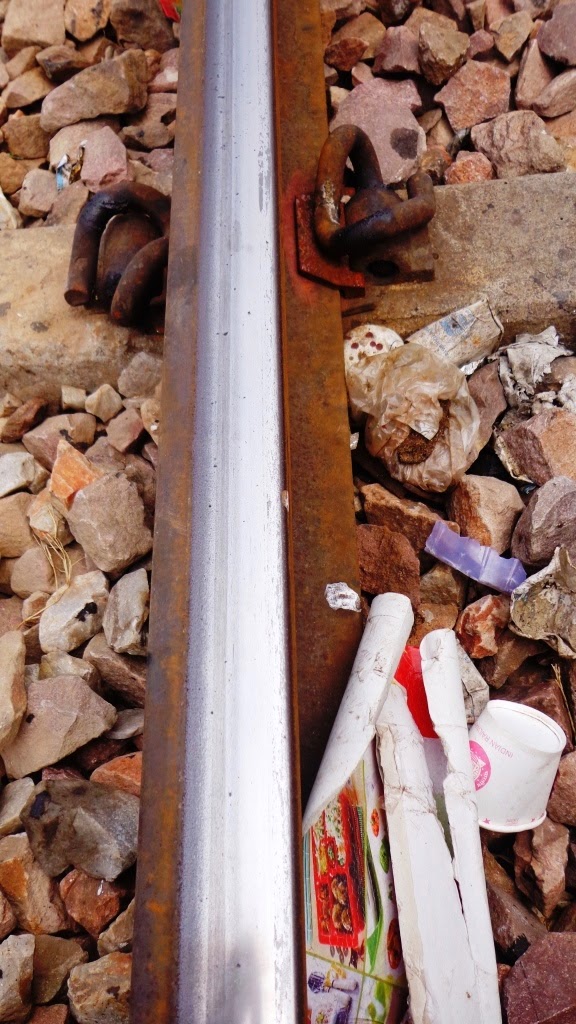 This 'old chestnut' of a riddle has a simple solution: a railway track.

I am writing this on board the Maharashtra Sankranti Express.   My destination is Delhi - where my friend Danny and I are due for a board meeting tomorrow.  We are travelling through ripening wheat fields in rural western UP, having passed the holy city of Mathura.  Our travelling companions are a father with his teenaged son, both watching a movie on a laptop and sharing a set of ear-buds, a man who seems to be a contracter of some sort - on his way to Kashmir, a young woman computer engineer - on her way to an interview, another man with a copy of Popular Science (borrowed by yours truly of course) and an India Today with Narendra Modi on the cover - and 3 commandoes on their way back to Delhi after doing VIP security in Mumbai for some pretty well known folks. 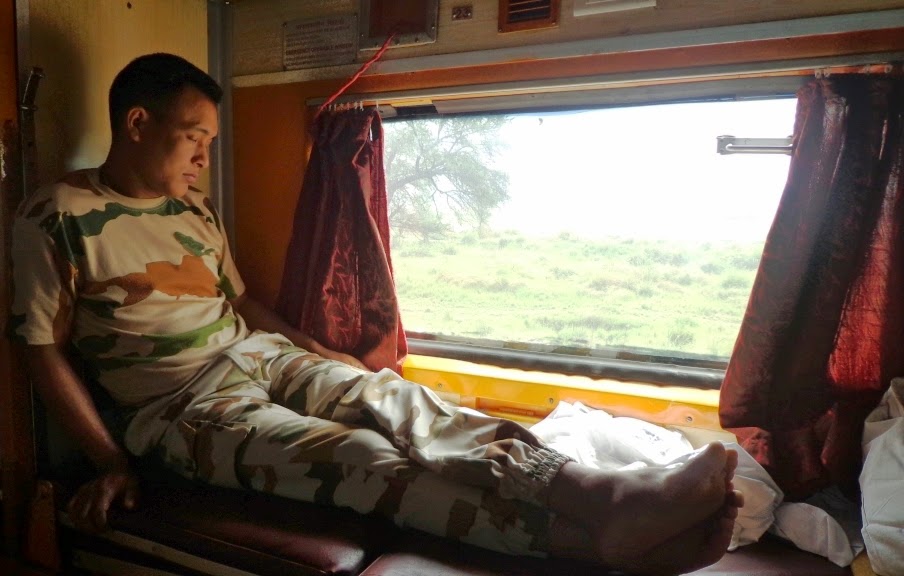 I was talking to one of them.  A man my age - from a farming community in Hariyana.  He has travelled the country and sees his wife and children a month out of the year.  The train had stopped for a long time at a signal so we got down for a stretch.  He looked at he fields near-by and pointed out the fields which were ready for harvest - and which fields needed 2 more weeks of clear skies to reach their potential.  I told him about the work we do - and how medications for HIV are making a huge difference in people's lives - but that pills will never cure hearts.  He nodded, saying that at the armed forces medical centres in Delhi there were a number of service-men who had HIV. 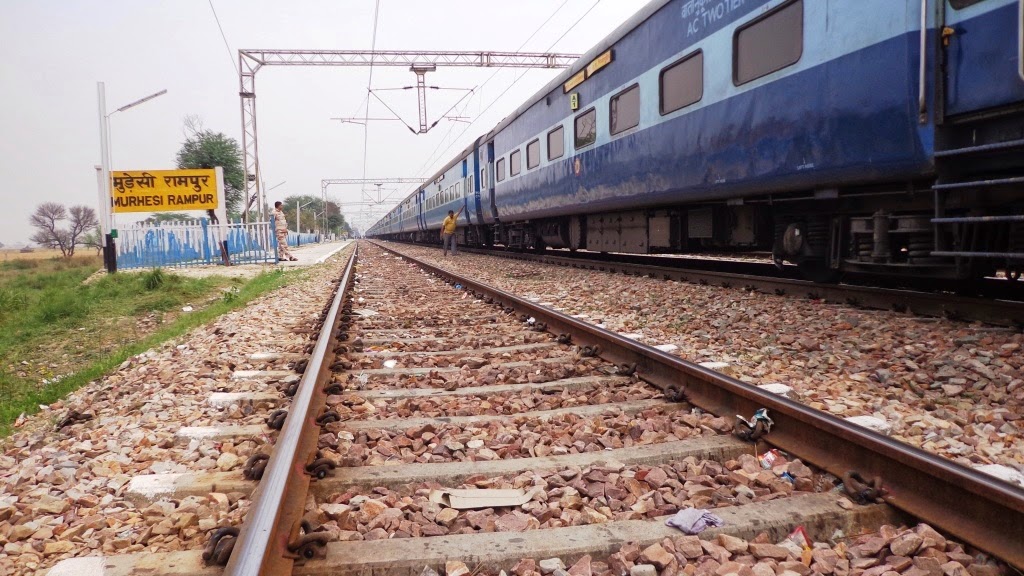 And so we roll on.  Phone calls are coming in now and my fellow passengers are telling family members and business colleagues about when they hope to arrive.  Our train seems about an hour late - but we are clipping along at a wonderful pace, the steady rumble of the aircon is matched by a low vibration and the muffled sound of our coach clicking over rails at a fine speed.  Electricity posts nip by outside at a regular rate as the flat disc of rurality becomes punctuated with odd hamlet and criss-crossed by power lines snaking away to the horizon.  Now we segue through a cluster of buildings, then we barrel past a rail crossing.

If we went up and looked down at us, we would be a small metal worm, making its way up north along the main rail corridor between Mumbai and Delhi.  Look further behind us and you will see another such worm, also making its way north.  Look ahead of us and there is another.  A set of worms moving ahead at safe intervals between each other.  And look across the nation and you see hundreds of trains taking thousands and thousands of people across the land.

This is the steel frame on which our country moves.  With all the advances on road, and all the metal birds that fly through the sky - its our rail that is still the medium on which India moves.
While waiting for the train in Borivali I over heard a young couple asking people when the train to Ahmedabad would come.  There was something in the way the young woman asked it that marked her out as a person who had not done much train travel before.  But there she and the young man (brother? lover?) she was with were on the platform - waiting to be taken away.

And so it goes.  I have since arrived hale and hearty in Delhi.  After seeing a wild hare in a rural part, and the inevitable shacks and garbage that announce the onset of a city, we ended up at Nizamuddin Station in Delhi, a mere 5 minutes behind time.

Across the darkness of the night other trains are leaving from stations, ploughing through the night, halting at signals.  Their human cargoes living out another strand of life - woven together for a season - as their steel caterpillars whisk them onwards, onwards. 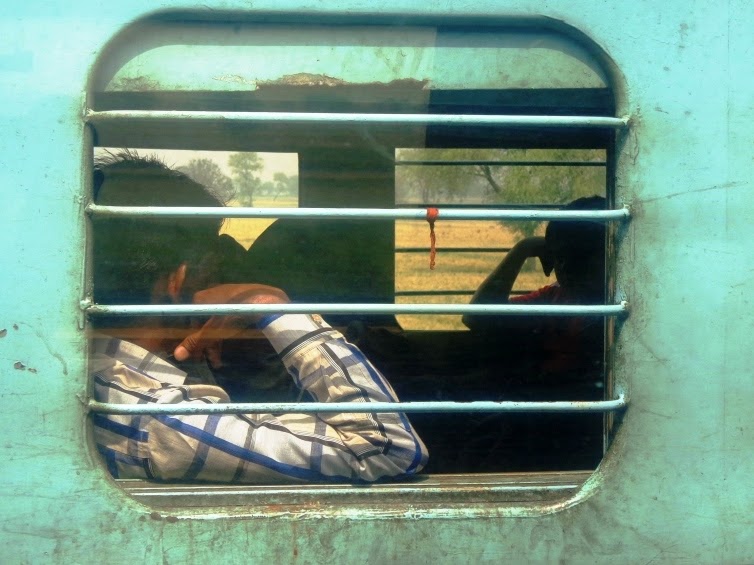 Meanwhile, I am about to book tickets for 2 months from tonight - when we as a family should be leaving New Delhi station for Dehra Dun on the 11.45 PM AC Express.   Bharaitya Rel - jai ho!

Posted by Andi and Sheba Eicher at 22:04