Many years ago I had a magical summer.  We were in Europe - spending time with Oma Fischer.  It was 1978.  Opa Fischer died in 1975.   Oma Fischer was living in the 'German Democratic Republic' - also known as 'East Germany.'

Mum and Dad took us 3 kids with them to the OM International Conference - I think it was in Holland.  After that, Dad was invited to go to Sweden and Finland.  Mum and Dad decided that Mum would return to East Germany with Stefan and Premi - and that I would go along with Dad on his trip.

We drove along with a Finnish brother up through Denmark, on to a ferry, and then over to Sweden.

In Sweden we visited Hans and Ruth Strom - who had been with OM in India in the late 1960s - and whose son Stefan was born here.  They had helped run OM Sweden and were living in the countryside.

Their house was like heaven to me.  There son Stefan - two years older to me - took me in as a friend and we went on bicycles into the forests, gathering blue berries.  In his front-yard, Stefan had rigged up a pole vault pit - and with the aid of bamboo poles was making a go at the big time.  Never having been much of a sports-boy, let alone a sports-man, my attempts at pole-vaulting stopped there.  But what fun to have a go with this boy who later has become a sports-teacher.

At 11 AM there was a meal.  Sandwiches. Hot drinks. Ice cream.   I thought this was lunch.  But at 1 PM another large meal awaited us.  And then something at 4 PM.  And then a supper.   Whether they were trying to fatten up a thin Indian boy or whether this was just the way it was in Sweden I never found out - but having grown up with more than a faint wiff of austerity, this was all quite delightful.

After 2 days it was time to go with Dad to Finland.  But I had found the place where I wanted to be.  It was decided that I could stay the week there and Dad would pick me up on the way back.
And so my Swedish summer continued.

I knew very little about tennis.  But that week on a Sunday afternoon I went over with the Strom's to a neighbour to watch the finals of the Wimbeldon Men's finals.  Having been in the US for a year previously, my sympathies (carefully concealed) were with a certain Jimmy Connors.   Unsurprisingly, the room full of Swedes were baying for their own favourite - the great Bjorn Borg.  I still remember the black and white images of Borg doing what he did best - winning at Wimbledon - to the delighted shouts of all and sundry present (except yours truly).

This month - a good 36 years after that week in Sweden - we had the joy of hosting uncle Hans and Ruth Strom at our place here in Thane. 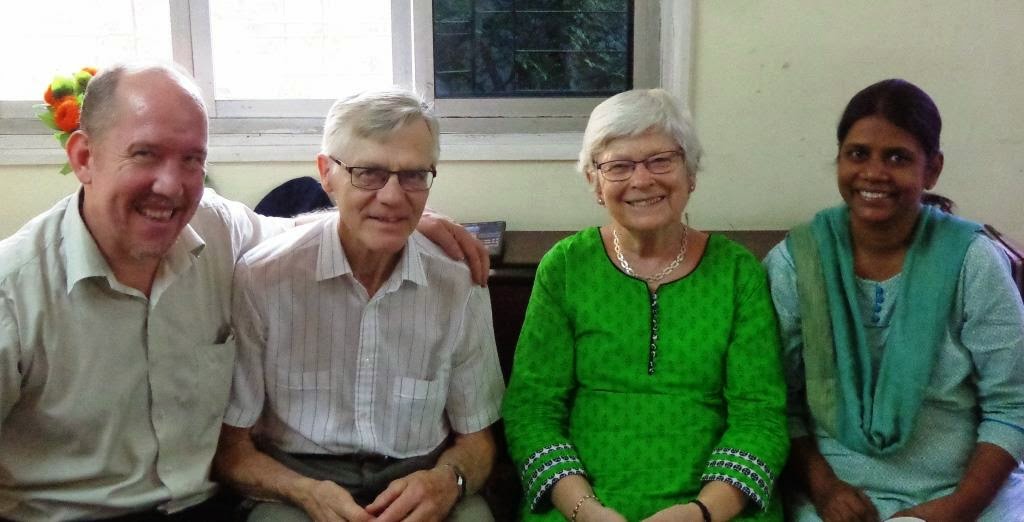 They have weathered the years very well.  Now in their 70s, they were on a tour of India, meeting many of their old friends (not a few of which have lost their spouses) as well as a number of the schools that they have been supporting over the last few years.

As a young married couple, they both had good teaching jobs when they decided to go to mainland Europe with OM to share the love of Jesus with others.   After praying about it, they extended that one summer to a life-time of service.   A few years of this time were in India, and when they were asked to return to Sweden to set up the work there - they were returning to nothing of substance as they had 'sold off' most of their belongings when they left for India.   One of the things that they asked God was for a fully furnised house - at no rent.  And the Lord provided.

That was the house in the countryside where I had spent my magical week.  A local farmer allowed them to stay there for many years without taking a penny (or a krona is it were).
Over time, God give them a place of their own - in the near-by town, and their son and daughter now have families of their own and are following God in their own way too.

Before coming to India this time, Ruth had been wondering about the rigors of travelling for 2 months across the country.  One night she woke up and read about how Peter had been imprisoned and an angel had come and woken him and told him to get up.  When he did so, the chains fell off - and the angel then led him out.

Ruth felt God telling her that this was a message for her.  "But what chains do I have Lord?  I am not in jail." she spoke out to God in prayer.  Then God spoke to her through a thought: "Your fears about India are shackeling you."  And Ruth realised that her fears had been hemming her in.  She felt a tremendous peace as she took the step of faith and put her fears in the Lord's hands.
What a blessing for us to be visited by such living legends.  The years hang lightly on these saints.

The Bible tells us to consider the outcome of the lives of those who have shared the faith with us.  And to imitate their faith.   Here's a couple whose faith is worth imitating - at whatever stage of life we may be in!
Posted by Andi and Sheba Eicher at 10:00