I heard an amazing speech last week.  It was crazy late but somehow I was up (childhood insomnia still playing games with me) and I clicked on to the Passion 2013 conference.  They had a live stream going - and not expecting to be able to catch much I tried it out.  The thing actually worked.  I was in Thane sometime after midnight - and the speaker was there in Atlanta - pouring out his heart.

It turns out the man was Gary Haugen - the founder of International Justice Mission.  He was talking about the 27 million people today who are in some form of slavery / bondage around our world - and how IJM and others have been working to bring freedom and restoration.  He gave a challenge to the crowd to end slavery in this generation.

That's right.  60 K.  All together for 4 days of worship and hard core Bible teaching.  And other things too.

Where there are that many people there is going to have to be hoopla.  And sure enough you have the kind of stage and pyrotechnics that would do a U2 concert proud.

When they say jumbo-screen - they really mean it.  Jumbo-wumbo.  Strangely the crowd seemed all to be wearing clothes of a palate that covered a small spectrum of tea stains.  Its a quarter century since I started college as a freshman in 87 - styles change I guess.

Its easy to be cynical when you hear the conference organiser extolling the virtues of the concert oops I mean conference app and earnestly telling people about the many 'giving stations' where people can swipe their cards and I assume their smart phones to get the cash going in the right direction.  The goal (at least of the appeal that I heard) - to raise US$ 3 million to be able to 'end it now' - to stop slavery world-wide in this generation.

But think of it.  Where else do you get so many young people together with such - well - passion?  Yes you are going to have some loopiness and some razzmatazz to cater to such huge numbers.

And at the end of the day - it wasn't the big names that were bringing all these people together - it was by and large a desire for deeper intimacy with Jesus.  Just because something is large and successful doesn't mean its wrong.

So here I was in the darkness of a post 1 am bedroom in Thane - Gary was speaking half a world away - but with such clarity about the call to justice - and how Christ is our only hope to see justice done - and how individual lives have been shaped by the obedience that Jesus-followers who live their lives for him are doing.

And then right after Gary's talk the main organiser comes up on stage to announce the 'End it Now' programme and challenges people to give.  And I have to admit to a bit of a thrill when the very first of the partner organisations he named was one I know well - because they are working in Mumbai to rehabilitate women in the sex trade.   My good friend Jim was in Atlanta for the conference on behalf of this organisation - and I immediately shot off an email telling him how excited I was for him.

This is his response:

So good to hear from you. I most probability am way off but am more discouraged being here, so much theatrics, so many buzz words and all of these ways does not allow for deeper thinking. I very much doubt that even a few people would be interested in hearing the complexities and labor involved.

Feeling convicted to draw much closer to the Lord this year, look forward to seeing you brother.

Its a long way between the huge high of being with 59,999 other enthusiastic worshippers...

.... to the gritty reality of a daily slog to help women in the sex trade get out.  Really get out.  And stay out.  And start up a new life.  And really be changed. 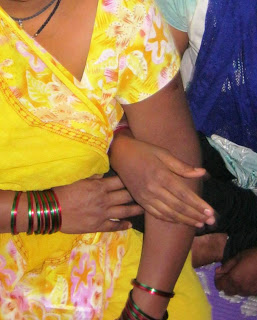 I had the privilege of spending a week with a church-based organisation that works with who are active in the sex trade in Mumbai.

I came away deeply challenged, and disturbed.

Here is a world I was dimly aware of  - that exists side-by-side, intermingled with the world around it.  A world where women are used and abused and where wrong seems right.  A world which thrives bondages of all kinds - mental, physical, spiritual, emotional, financial.  Where the end effect on the women is such disheartening coarseness that you just want to run away.

And yet my colleagues whose work I was 'evaluating' went into the areas every day.  Making relationships.  Investing themselves into these women and their children.  Treating them with love and respect.  Praying with them.  Offering health teaching and curative options.  Getting them together for times of singing and sharing.  Opening up options for them to leave the trade.  Helping those who take the plunge to start afresh.  Loving, caring, loving, caring...

And yet the 'results' of this amazingly dedicated set of workers seemed to me to be so dishearteningly few.  I was told by one of the workers that she thought 4 women had left the trade during 2012 directly due to their efforts to reach out to them.

The hundreds of hours of work.  The terrible toll on the workers own families.  The faithful and persistent following up of people who can be oh-so-ungrateful at times, whose lives are governed by such different patterns....

But as the chairman - a senior pastor - told me... its not about all the starfish that are washed up on shore - its about the ones that the man tosses back into the sea.  There may be small numbers - but those who do take the plunge and start a new life are building destinies.  The chairman then turned the story around - why are there not more people throwing starfish back into the ocean. 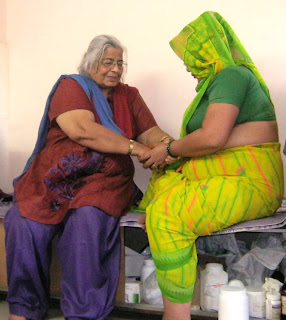 Part of it - I think - has to do with the inevitable sloth that we have. The need to feel secure.  The need for us to get our own little set of success variables right - and our tendency to 'push-back-for-later' the opportunities that arise to change the lives of others.

The area of slavery - and especially the various shades of bondage that exist in the sex-trade - is something we are just so uncomfortable with - that we would so much rather get out our cheque-books and write out a sum - than for us to have anything to practically do with it.

Sounds suspiciously like almost anything that is really going to stand the test of time - it is hard and often thankless work - which most will give a wide berth - but which can lead to destinies being changed.

I don't know if the prayer that my co-evaluator Dr. Lalita Edwards had with an aging sex worker (a madame?) will really make a huge difference in her life or not.  But I am glad she prayed.  And we must move forward in hope.

One thing we know.  Nothing comes easy.  If there were easy and pain-free options to ending slavery we would have done those long ago.

How much we need sloggers.  People who can, and will, continue to reach out in love.   How much we need clusters of people who work together and encourage each other.   This is what the local church should be.  What it must be.  A community of those-being-repaired who are relentlessly committed to joyful and God-fearing love-in-action.

We are so glad for the amazing experience that our 60K friends had in Atlanta at Passion 2013.  We want to see at least 60K local church congregations giving of themselves for the long haul.  Being ready to follow Jesus as He radically calls them to, rather than continue to follow in the well-worn grooves of comfortable marry-you-bury-you-have-a-merry-Christmas-and-church-raffle Christendom.  We need people with a generational vision.  And willingness to live for eternity instead of just the present.

Its no surprise that our Lord Jesus had women who used to be prostitutes in his core team of followers.  Here was a man who set these women free. May His Spirit continue to blow through us in power today.
Posted by Andi and Sheba Eicher at 23:48