Mussoorie must be one of the most beautiful places on earth.  Mum and Dad live perched on the hillside in their beautiful nest called Shanti Kunj with views that want to make you cry for sheer beauty. 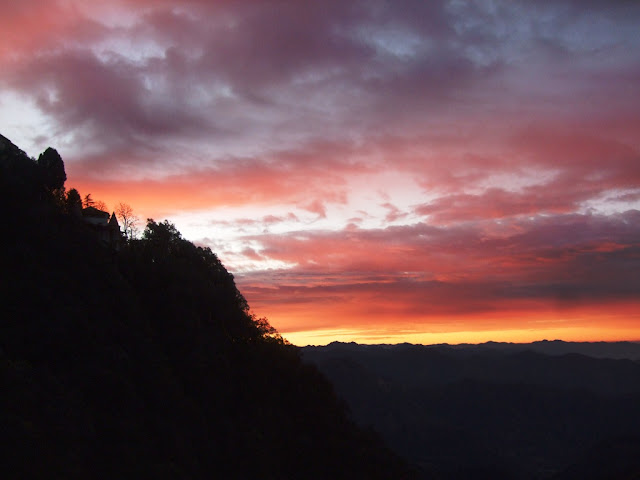 While we were flying back from Vishakapatnam I had the urge to call up Mum and Dad when our plane touched down in Hyderabad and we had a few minutes of waiting on the tarmac as the Hyderabad-Mumbai passengers got on board.

Normally Dad answers the phone with a cheery 'Happy Christmas' or something to that effect.

This time I found myself talking to Mum.  She was curiously quiet.  Then she told me the news.  Dad had been up on the hillside behind the house, working on the water-tanks which supply the house below.  He was wearing shoes with slick soles - and had slipped and fallen down and hurt himself badly.

He had been bleeding but had not broken any bones - thank God.

They were nursing him at home and planning to have him seen by the doctor at Landour Community Hospital the next day - which was a Sunday. 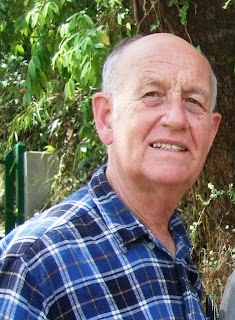 When they took him to the hospital and did the x-rays they realised that Dad had damaged his neck vertebrae.   Dr. Matthew - the orthopaedic surgeon from Herbertpur hospital was due to come for his weekly visit on Tuesday - so they got Dad an appointment with him - and tried to get a collar to support his head.

Dr. Matthew was concerned when he saw the x-rays and asked Dad to have an MRI done in Dehra Dun.   He said that it was a miracle that Dad had not been injured even more severely.  Becoming a paraplaegic was a clear possibility - and our old enemy death was missed by a whisker too.

Accidents do happen.  But you always expect them to happen to people you don't know.

Here was our dear Dad in a limbo.  We are so glad for the telephone that allows so much to be said over such a distance.  And so glad for communication we have with God in prayer.

We mentally planned the next steps.  Should we go up to Mussoorie?  Would Dad need surgery?  We started looking into the options of having here at Bethany Hospital and looking after him here.   What would the MRI reports show?  What would Dr. Mathew suggest?

We had been expecting Mum and Dad to spend a month with us from mid Jan to mid Feb.  This was obviously not going to happen.  The last time we saw them was in May 2012 when we went up to Mussoorie.

The MRI reports showed that there are some fractures in his 7th Cervical vertaebra.  But that this can be dealt with without having to resort to surgery.  The challenge is for Dad to keep his neck straight in the healing process.

To help him do this - there is a device called a 'Philadelphia collar' which is a kind of cervical collar that provides stability for the C1-C7 vertebrae.   He is currently wearing this faithfully and has already had some steps to improvement - but the prognosis is that it will take some 8 weeks or so for him to regain his normal function.

So we have Dad up in the hills, wearing his Philadelphia collar and being nursed on by Mum and others in the extended Eicher family there. 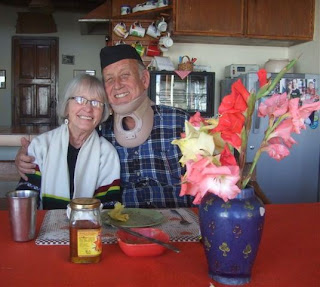 So we are here in Thane and Mum and Dad are up in Mussoorie.

We know it has not been easy and that after a very busy time of giving of themselves to so many others - they now are in a season of convalesance.

Dad is still at the computer doing his emails - but he has been told to ration it strictly.  Mum and Vikram and others are fielding the phone calls.  Guests are gently but firmly dealt with by the very protective and loving German wife Dad has been blessed with for 45 years of married life.

Prayers are going up.  Blessings are coming down.

Its not easy for Dad at this time - but he remains at his vintage best in his email to us all about his fall:

God bless you Dad.  We are so proud of you and Mum.

Posted by Andi and Sheba Eicher at 22:03