Bits of the Wall

Mum and Dad's place is a museum.  Anything beautiful, old and worthwhile that enters never seems to leave.  The attic is full of papers and various treasures from our childhood (I stumble across a vacation diary I wrote in 1982).  Shanti Kunj's walls are covered with photos, every shelf that is not groaning with books has the odd knick knack that tells a tale.

In the side board are 4 stones.  I recognised them and laid them out.  They are not pretty rocks found on the hillside or from a stream. 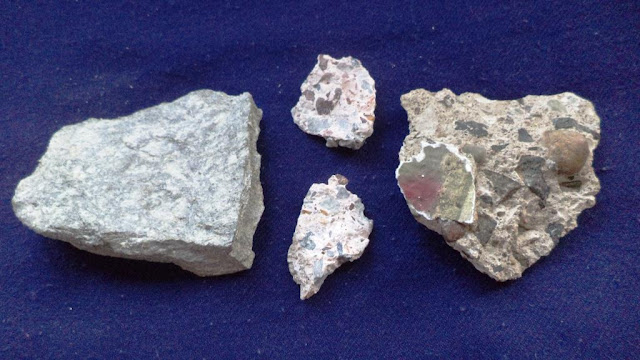 Holding the concrete bits in my hand took me back to 1990.

Stefan had just finished high-school at Woodstock and we were travelling in Germany on our way to college in the US.

We went to Berlin and stayed with our Aunt Esther and Uncle Karl.  They were a part of the family from Eastern Germany who were more closely associated with the party that most of our members.  He was at such a level that he was able to travel abroad during the days when foreign travel was strictly prohibited for most of the rank and file.  Of all our East German relatives - he was to only one to see me as a baby - since he visited India to take part in a 'peace conference'  (we don't have too many of those these days after the fall of the Iron Curtain...).

As we sat and discussed the extra-ordinary events of the previous summer - and the collapse of the German Democratic Republic - Uncle Karl expressed a sense of sadness.  He felt that things could have been better if people were given a chance.   A life-time in the party leaves its traces.   They were happy with the change - but I think were a bit bewildered by the suddenness of it all - and were having to rewind their lives and the decisions they had made so far.

But when we asked them for a hammer and a chisel they were more than happy to lend them to us.  They knew why we wanted the tools. We were on a mission.  We had to do something for our mother. 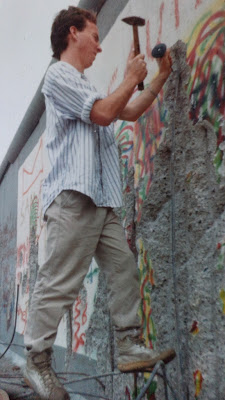 And so when we went to the Potsdammer Platz and wandered around what had been previously one of the most feared places on earth - we actually got to do the unthinkable.

To personally hammer away at the 'Berlin Wall.'

To take some of the chips of concrete away as souvenirs.

As little bits of concrete history.

As a gift to our mother whose life had been so twisted by the sham republic of the GDR and the buying in that so many made to the lies.

And now, the oddly-shaped little bits of concrete lie in a glass case along with what remains of my German grandmother's porcelain dining set.  One of them still with some graffiti paint on it.

As testimony to the power of truth.

A reminder about how even the most 'permanent' barriers can be broken.


-----------
Aunt Esther and Uncle Karl O. have both died in the mean time.  Aunt Esther died after a long fight with cancer - and Mum and Dad spent a wonderful time with Uncle Karl in the fall of 2011.  He was delighted to be able to use his English with Dad and they had a deep and meaningful time of prayer together.   We believe that Uncle Karl is tasting the fullness of new life with Jesus at this time - having passed out of this life last year.
Posted by Andi and Sheba Eicher at 12:39