Ever since Sheba came back from Raxaul in early December, we have had a steady unbroken streak of patients admitted at Jeevan Sahara Kendra. 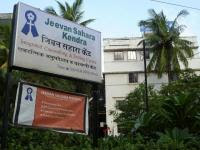 We are currently operating out of the 1st floor of the Lok Hospital building.  When we first moved in last June - the place seemed intimidatingly big. Over the past few months our activities have started to fill up the place.

Being able to admit sick people with HIV for intensive treatment has been a joy and a challenge. A joy because we are able to give love and care to people who have received so little of either.  Some of them were left to die in govt. hospitals - and just to have a clean bed, have their room cleaned without giving a bribe, have a nurse who touches them with love and talks to them, have a doctor who really cares and prays with them....

Some of our friends have come to us in a very very late stage.

Last week Basanti (name changed of course - as are all in this note) was brought to us by church members from Mumbai.  Basanti's parents had died of HIV.  Her brother was negative, but she was HIV positive. She had been under treatment for some time but had stopped repeatedly.  She was skin and bone when the church picked her up and brought her to us.  She was all of 24.

It was never looking positive for her recovery, but we tried.  Three days of loving care later, Basanti slipped away at 3.30 AM on Monday morning.  Sadly, the lady without any relatives had uncles and others coming to pick up her body for the last rites. Would that they had been with her before...

We are sad to lose Basanti - but know that she put her faith in the arms of Jesus.  The last days were hard, but they were in the care of people who loved her. We have a real hope that we will meet her on a glorious day in the future.

Then there is Tarun.  He was brought to us in such a sad state. He could hardly breathe. After being under our care for a few days his relatives gave up hope and wanted to take him home. Two of our staff pleaded for another chance. We thought he would die on the way home - he was in such a terrible state.

Well he didn't!  He survived and lives to tell the tale.

This morning while I was banging away at my computer in the office I looked up and saw Tarun walk up the steps with his wife.  He had come for a follow-up check-up.

We have 6 beds in 3 rooms.  The rooms are the old Lok Hospital's doctor's consulting rooms. We would like to do some renovation and make 2 wards of 5 beds each.  We would also like to construct a bathing space - since the toilets are really not meant for taking baths in.  And we also need some kind of an isolation room - since many of our friends have very active tuberculosis - and another set are distressingly psychiatrically unstable.

Our current highlight of the inpatient care was two weeks ago.  We had a full house.  All 6 beds had sick patients occupying them. Then came Hari - a dear man who is pretty healthy in body - but who suffers from deep fear.  He insisted on being admitted.  We told him we had no beds.  He said he would sleep on the floor. And he did.

We put out a mattress and accommodated him on the floor. The next day a patient was discharged so the 117% occupancy went down to 100%.