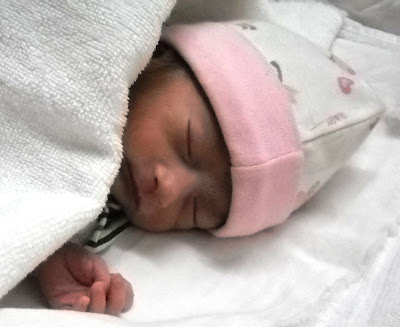 Two decades ago an HIV positive mother left her daughter in the trash.

Everything seemed bright for so long - then things soured.  The girl - Sarah we will name her - made some poor choices.  The institution that she was in could not help her any more. She was shifted to another set of carers. Same story - different issues. The pattern repeated itself.

A few months ago Sarah was brought back to one of the couples who had initially looked after her. She was sick and thin.  In her early 20s she looked both terribly young - and terribly old.  She was dying of HIV.  Over the years she had been on and off her meds (Anti-Retroviral Therapy - aka ART).  Now the virus was taking the upper hand.  Sarah's immunity was almost non-existent.

When we admitted her at JSK we didn't know how long she would live.  We complained of abdominal pains. Sheba did what she does for most cases of abdominal pains in young women - asked for an ultrasound. The film showed a developing child.

The family that had taken her in again was shocked - but rallied around. Sarah's immunity was very low.  The only option was to start her on expensive 2nd line ART.  After stabilising her a bit, we discharged her to the care of the family.  We were able to get Sarah hooked up with another agency who helps out with these 2nd line drugs for free. But she needed a stable place - esp. with her pregnancy.

And so Sarah was admitted back at JSK.  To start her on the 2nd line drugs, and to see her through her pregnancy.

Its not been easy for Sarah.  At one point Sheba helped Sarah sit up comfortably in her bed last week.  Sheba reached over and took Sarah's pillow so that it would give support to her back. Below the pillow was Sarah's tablets that she was supposed to have taken that morning. She had acted as if she took the dose - popping them into her mouth in front of the nurse - and then must have removed them and hidden them - probably to throw them away.

We are touched with the love that Sarah's care-givers are giving her.  They have included the whole church in the effort - and especially after little Timothy was born - we have seen a variety of people come to encourage and pray with Sarah.

Sarah has gained weight - and the traces of a smile too.

Little Timothy has been spending most of his time sleeping and feeding. We were able to help Timothy feed from a spoon and steel cup from the very beginning so that usually un-sterile bottle feeds are not even started. Using infant formula further cuts down the risk that Timothy will get HIV.  We are hoping that he will join the 20 odd kids who have been successfully born to HIV positive mothers with the help of  JSK.  To date not one of these children was found HIV positive when we tested them at 18 months!  Grace of God.

Yesterday Sarah and Timothy were discharged from JSK.  The social workers helped to set her up with another family where she and the baby will be looked after. The family is also HIV positive and knows the challenges of living with HIV.  They are also followers of Jesus and willing to share their lives with Sarah and her little child.  We are grateful for the people who continue to love Sarah and are sharing this part of her journey with her and Timothy.

Sarah started her life in the trash.  Timothy in the arms of love.  Both need so much more love in the coming days and years.

No easy road forward. But such hope in every child.
Posted by Andi and Sheba Eicher at 10:44