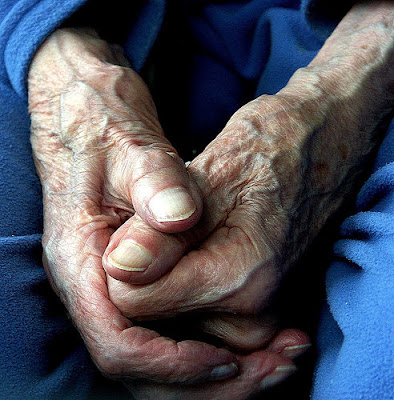 Growing old is a part of life. But a part we usually try to hide - or bury often rather brutally (cf. a certain young man who died at 50 after a failed quest to remain a boy forever).

In working with people with HIV we deal largely with people in their mid-30s. People like the young man who found out that he had HIV today. He had been sick - and his brother-in-law had know about his diagnosis for 6 months already - but the man himself had not been told the truth till this morning - and then we were called in to help explain what it means.

But spare a thought for those who are not looking after small children anymore. Those who don't have living parents - because they themselves are aged.

This evening we had a heart-breaking call from S. India. A couple we know well have left the city and settled in a small town where they felt they would be looked after more than in the anonymity of their flat in urban Mumbai.

Their children are abroad. Married. Settled. With kids of their own.

The parents are living through their HIV here. They have visited their children several times - but the cold of their adopted countries is too much for them.

Recently one of their children transferred back for some months and called the parents to be with her in one of the booming metropolises that dot the South.

But now she has returned to her family and further career. Her mother and father are alone.

We asked "how are you". The voice on the phone was crying.

Auntie has been under psychiatric care for years - with good results. But her husband is now the one that she is caring for rather than he for her.

She is frightened and alone. "I have lost my mind" she said. The medications they are taking for HIV are being paid by their children abroad - but they do not have the on-going care and follow-up they need.

The contrast to our own life is so stark. Here we were holding our mobile in our hands - while Asha did her home-work, and Enoch brought various lego toys for inspection and advice. The comfort and love that we are surrounded with is phenomenal. The options that are at our disposal seem positively God-like.

How to comfort across the kilometers, across the crackly monsoonal airwaves?

We did as best we could. Feeble sounding words, but heart-feltly meant. A prayer for Auntie and Uncle - spoken to God but transmitted via the mobile to Auntie's ear. Telling them that we had prayed for them as a couple last week in our JSK team prayers. Words of comfort and encouragement. Then later this evening, prayers with the children before they slept.

In the dark of the night, as I get ready to lie down myself - the house is totally quiet other than the whirr of the fans and the croak of frogs outside and the occasional car. At this time I think about what it means to be old and without the love and support of our own.

So many with HIV live in the double bind. They are too afraid of telling the wider community (even their wider family) about their condition because of the horror and revulsion HIV elicits. At the same time they are at a point where even if they are not suffering from active HIV disease (which a lot are as well) the normal wear-and-tear of getting old is kicking in - and they need the help which the elderly with HIV are not getting.

A friend of ours came by about 2 years ago and did a focus group on elderly care givers of people with HIV. Spare a thought for those who are growing old and have the additional challenge of living with HIV.
Posted by Andi and Sheba Eicher at 23:02