As we close the day at 10.52 PM, Mum is in bed, wide awake.  She called me and told me that she just cannot sleep, and asked me to pray for her.  I gladly did.  And I am so grateful because this was conversation with Mum was just not possible just 36 hours ago when Mum was glassy eyed, tossing and turning in her bed.  She still needs to fall asleep, of course, but she is increasingly self-aware, able to communicate, and gradually understanding some of the complexity of her situation.

Today was a day of much progress for Mum – and some further clarity on just how long the road ahead will be.   Thank you, every one of you, for your faithful prayers.  Mum started to drink water from a cup (albeit held for her) and also started eating some simple foods like suji, dal, and mashed banana & curd.   She was lucid for almost all of the day, and has begun expressing her desire to go home to Shanti Kunj.

We had a stream of helpers and Mum was loved and cared for by loving hands.  It was so nice to have Stefan and Neeru and their 3 wonderful kids come to minister to Mum the first thing in the morning after Neeru and the kids had arrived from Delhi late in the night.  We are grateful that Neeru was able to stay the whole day to serve Mum.  Bison and Ruby and there 2 were also present during the day.  At the end of the day, Mum told the nurses that she has been looked after by “so many wonderful, loving people.” 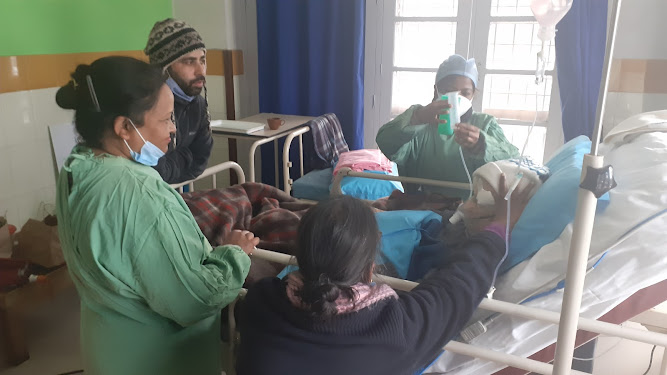 The three markers of progress today for Mum were as follows.  Firstly she has started to have real conversations, recognizing people and speaking behind her oxygen mask.  Secondly, she also started drinking orally and eating some simple food orally (while she still has the naso-gastric tube in).  Thirdly, we were able to begin a process of rehabilitation for her limbs.  She is unable to lift her left arm, but can squeeze her left hand.  She can lift her right arm, but cannot ‘aim’ her hand and so it flops around jerkily.  And Mum ‘sat’ in a wheel chair for a short period too.   She still cannot even turn herself around in bed, and has to be shifted every 2 hours but we are grateful for every step in the right direction.

All told we are again so thankful for steps being made in the right direction.   We are slowly moving out of ‘life-saving’ into ‘regaining life skills’ territory.  Please pray for Mum as she starts to fathom that she will not just be able to stretch herself and walk back up the hillside.  We have still not had a conversation about why she is in the hospital, and how long she was in an altered state.  The frustrations of being largely dependent on others – at least for the near future - are just about to be tackled by Mum.

Your prayers are cherished for this hard path.

Today was the Lord’s Day and we met at the end of the day around Mum’s bed.  She said that she wanted us to sing “The Lord’s my shepherd” which we followed up by “Yahowah Charwaha mera” (same psalm in Hindi).   Mum recited Ps. 23 and we walked through it thankfully, seeing just how much God has taken her through the valley of the shadow of death.   Sheba shared from Rev. 1 where John sees Christ in all His glory – what a hope for us to know that He was dead, and is alive, and is alive forever more.   And that He is the Beginning and the End.  That our times are in His hands and that He loves us all very much.

And so on to the next steps.  Thank you for your prayers, messages, and whatsapp recordings! So much appreciated.

Posted by Andi and Sheba Eicher at 01:43