One of the great things of having Mum and Dad with us for this extended period of time as we work through Dad's chemo-therapy (5 months down - 1 to go now) is the joy of meeting their friends.

After the initial onslaught of emails and calls when Dad was going through the deep waters of the impending surgery and all that that entailed, we have gradually (and thankfully) segued into a blessedly normal life together.  And while the numbers of visitors is on the wane, we are thrilled to have the opportunities to drink deep of those who do wend their way here.   Earlier this month we hosted Uncle Augustine and Aunty Oomana Koshy for a day.

And over the past weekend we had none other than Ron and Lilo Penny.

Wow.  Just the names themselves almost send shivers of delight down my spine.  This is a couple who are legend.  The stories both of vintage days as well as the latest escapades keep flowing - as does the laugther - and the occasional bouts of prayer as well.

Ron and Lilo were in town as one of the young men from their assembly in Bengaluru was getting married to a lovely lady from the Fort Assembly in Mumbai.  And instead of hurrying up and then bustling back down South, this goodly couple tarried for a bit with us.  What a blessing too! 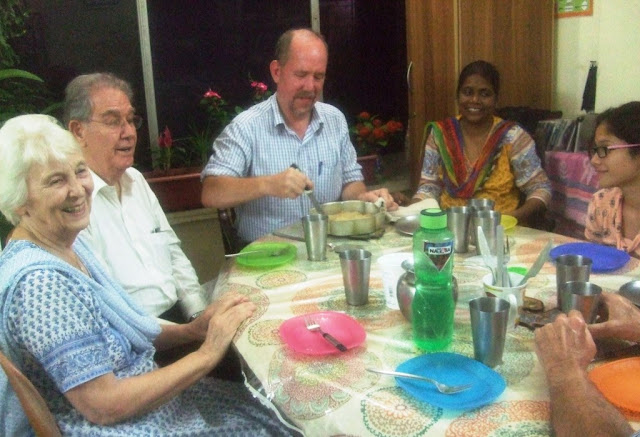 The weekend was packed.  We arrived back from a super quick trip to Lalitpur (more on that later...).  Ron and Lilo had the wedding to attend.  Dad had his dose of chemo to take at Bethany.  We had a training for church volunteers on Saturday.  And then there was our Sunday morning worship in our house fellowship where Ron shared and our evening gospel meeting.  In the midst of all of this were the different strands of conversation that were spun and shuttled in and out of the weft of our time together - often around the succession of meals we enjoyed together.

Where do we even start with Ron and Lilo - their lives have intersected and paralleled Mum and Dad's lives so much.  Lilo and Mum are German and come to India to serve with Operation Mobilsation in the mid 60s.  The two couples married a week apart and have 3 children - two boys and a girl each.  And most of all - both of these amazing partnerships have stuck it out - serving for more than 50 years in India each (200 plus years of missionary life between them). 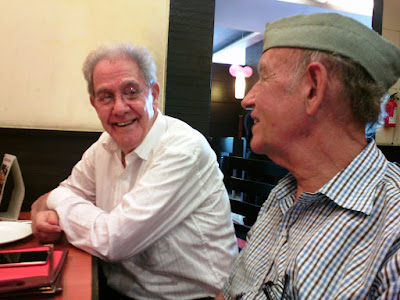 It was a delight to see our parents enjoying these dear friends of theirs - and a joy for Sheba and myself and the younger gang to also get a dose of stories.  Ron's memories of serving with Bro Bhakht Singh in Hyderabad.  Their life in Ranchi (then Bihar).  The Bangalore years.  The places and situations their kids and grandkids are living through (with the number of the latter into the double digits now!).

Seeing the four interact with such love and sheer delight in being together, observing their laughing and talking and praying, knowing that they were also talking about the pains that they are going through - all of this was tonic to our soul.  There are friends who stick closer than brothers... 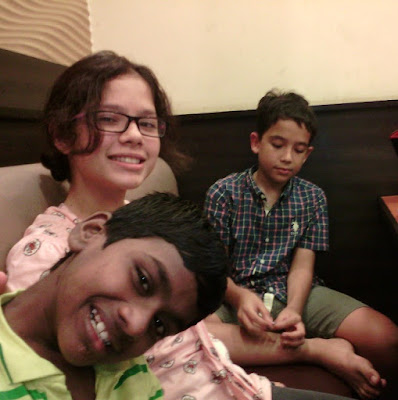 We had a string of great meals together too - and Oma's apple pies made their appearance too!  And then our dear guests insisted that we were to go out - so off to the fan-favourite Pizza Hut it was for all 9 of us!
It was all over so quickly.  We still feel some of the laughter in the home - but things are pretty quiet in the Eicher household with only 7 of us left (though the youngest can be pretty lively as you can see in the picture!).

However, don't count out the power of German enthusiasm.  Both of the Omas decided that they would like to have a day out - and see a bit of Mumbai since Aunty Lilo has not been here for many a moon.  So on the last day we packed them off on a State Transport bus that starts locally and goes all the way to the Mantralaya near Nariman point - almost as South Mumbai as you can get. 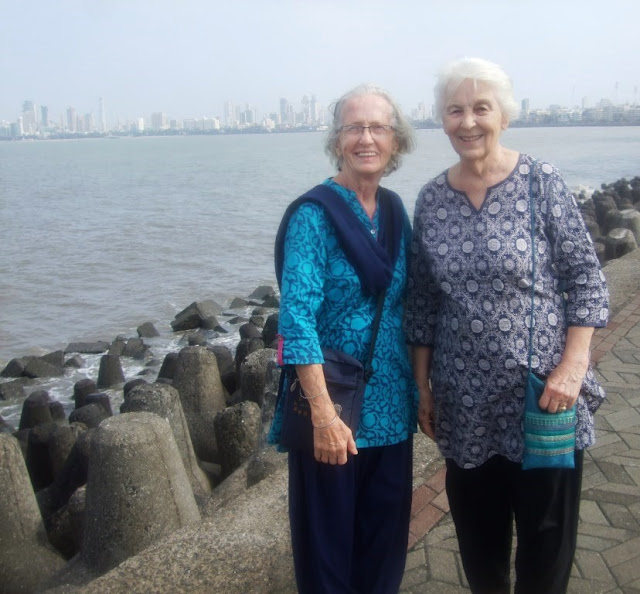 The original plan had them going to the Gateway of India and then going down to Marine Drive to Mani Bhavan in Girgaum (the house where Mahatma Gandhi used to stay which has been turned into a lovely museum) and up to Malabar hill if time permitted.

Time was short - so after the gateway and a quick nip into the Taj Mahal hotel, our ladies had a leisurely brunch at Cafe Mondegar - an amazing Irani cafe decorated with the late Mario Miranda's cartoons of Bombay types.  Not only that, the proprietor himself, a garrulous Irani filled them in on the history of the place (just next door to the other iconic Mumbai restaurant - Cafe Leopold which was attacked by the terrorists in 2008). 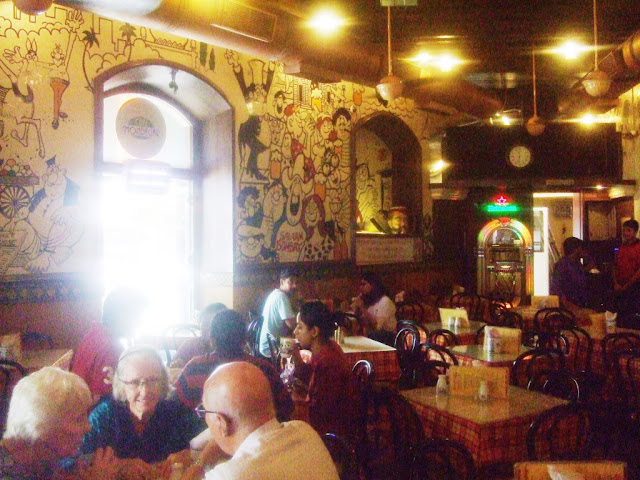 And so the pilgrims progress was a bit slower than planned.  The Dynamic Omas made it to Nana Chowk and decided to take a look at the Elim building where we had grown up.  They were delighted that uncle Sumitra Gaikwad was at home (he is recuperating from a stroke) and were graciously welcomed by Timothy and Sonali Gaikwad as well.  Here is a final look at 'Mondi's' as the SoBo types call it. "This is the part I never like" said uncle Ron, an hour and a half after our intrepid German ladies had returned and it was time to say good-bye and bundle off our dear Uncle Ron and Auntie Lilo into their cab.

We shared a time of prayer and then off the taxi went - taking our dear ones away on the first leg of their trip back to Bengaluru, Uncle Ron waving through the window until the vehicle swung out of sight once out of the gate.

When will we meet next?  Our heart both aches for the next meeting - and is at the same time so full of gratitude for these days of joy that we had together.
Posted by Andi and Sheba Eicher at 23:58