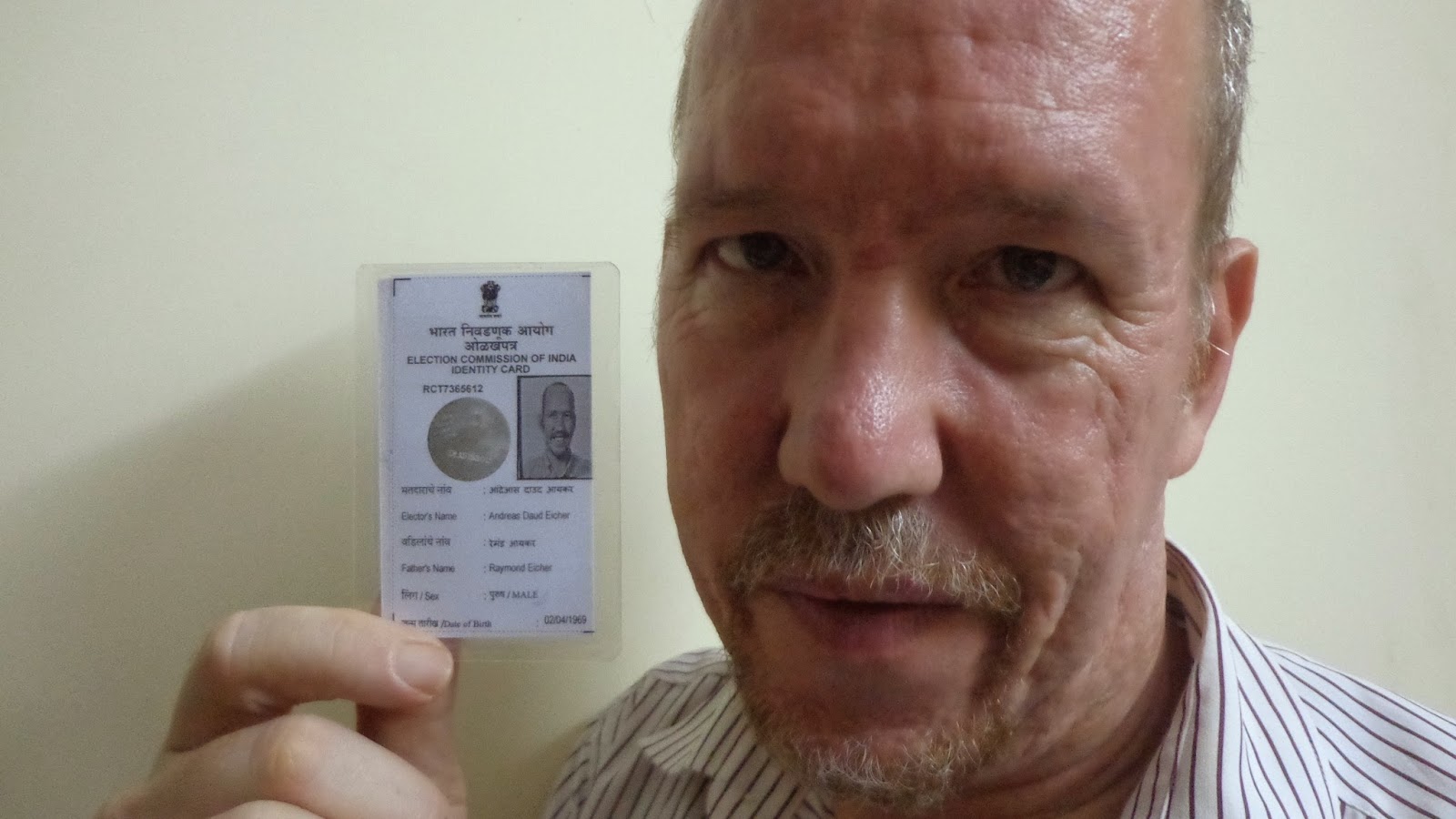 Someone came to the door and delivered a small laminated piece of paper.

It had my photo on it.  And the national seal.

I finally have been registered as a voter.

After all these years of moving around.  And then the general apathy that settles in, I was determined that this year I will vote.

Four visits to the various offices earlier this year did not bear fruit.  My application was not accepted in time for the Lok Sabha elections.  But another two rounds (I will spare you the gory-boring details) and then they finally accepted my papers.

With the elections for the state government coming up in 5 days from now, I was getting resigned to not voting... but hey presto the man appears and hands over the card!

Sadly, Sheba's papers were not accepted... again.   The reason?  In one of the questions on the form it asks you to declare if you have been registered to vote in another part of the country.   The question then takes the form of a request to have the name deleted.  Sheba dutifully filled this out.

But when I took our forms to the dear folks at the 'voter facilitation centre' they said that Sheba had to have certificate from Odisha stating that she has had her name removed from the list.   That battle will be fought next time.

I have a small problem, however.

Who on earth to vote for?

The state has 5 parties that are vying for power.  Each one thinks that they can win the election on their own.  Each is just waiting to find out how many seats they will win - and each one is totally ready to patch up with whoever else will put them in power.

The one party I was hoping to vote for - the Aam Admi Party - has apparently decided that it doesn't have the ability to put up candidates for this state election.   Last year this party gave the big boys some cause for concern when it actually managed to form a state government in Delhi state.   Sadly, the naivete of the anti-corruption gang was shown pretty quickly and the AAP leader resigned with a huff and a puff, stating that he was going to conquer the nation in the Lok Sabha polls.

So who should our vote go to - in the choice of electing the rulers of this state?

Two parties are pushing the 'sons of the soil' rhetoric which was their common birth.  Their main difference between them is that their leaders are cousins who both wanted to take over the helm of the party - and can't stand each other.   One continues with the bow-and-arrow symbol.  The other has quixotically been given the 'train' symbol.  And that too a smudgy old steam engine instead of a bullet train.

The other party (who just broke a 25 year alliance with the bow-and-arrow brigade) is bullish that the prime-minister's triumph will sweep them to power in Maharashtra.   With the lotus blooming, the folks who run it have their heads high in the sky.   We will have to see about that - politics makes strange-bedfellows - and the very people who were trumpeting Modi just a few months ago as the allies of the Lotus-folks are now calling him all sorts of names.

That leaves us with another set of estranged siblings.   One party claims a history that stretches back to the independence movement.  It used to have as its symbol Gandhi's beloved spinning wheel.  But our original iron woman reduced the grand old party to a personality cult almost two generations ago.  The once all powerful 'hand' symbol has and never recovered and was soundly thrashed in the national elections.  The other party claims to be a more 'nationalistic' version of this grand-dame of a party - but engages in the same rough-and-ready strong arm tactics as the sons-of-the-soil chappies - and has leaders who reek with wealth as they 'get things done'.

Alas.  The truth is that all 5 parties that are contesting the Maharashtra state elections are virtual identikits of each other.  And many 'leaders' have hopped from party to party so that we now have a nice bland curry that more or less tastes the same.  Same white Scorpios (or Audi SUVs for the higher ups).  Same posters showing the leader talking on a phone, pictures of mono-rails and whatnot in the back ground.  Same invocations of past warrior-kings.  Same patronage of families, with sons and wives and daughters taking up the family business as they are truly 'to the manor born.'  Same amazing jumps in 'net worth' every time an election is held - the amount they declare, when you track it across the years will make any financial analyst weep given the phenomenal rate of returns they seem to get.  And that is just the stuff they are revealing.  Let's not forget the truly massive mountains of cash (and sundry other valuables) that our ruling classes squirrel away.

So will I choose the "NOTA" option on my first vote?  I sincerely hope that I don't have to.  I hardly want to state that I have no faith in any of the folks on the ballot.

5 days to find out a bit more about our candidates.  And then I go and press the button and get my finger inked.

Democracy creaks on.   I remeber back to 1989 and listening to Uma Bharati give her spiel to villagers in the various election meetings she held on a gruelling day of campaigning out in the bad-lands of Khajaraho district in Madhya Pradesh.  Besides the 'Bharat Mata ki jai' slogans - what she basically told them was that the Congress govt. was cheating them and not building roads and schools - and that when she was elected, she would usher in a new era of prosperity.

Men were climbing on trees to get a better view of her.  The rapt gaze of the humble Indian elector was a sight to behold.  Ms. Bharati knew that she had to go and meet her voters or she would not get elected.

This week I join the ranks of those men with their thread bare shirts, leaning forward to hear what the 'leader' has to tell them.  In their hands they had one small but powerful weapon.  Their vote.  And at least once in 5 years the great and powerful (and those aiming to be great and powerful) had to come and solicit their assent.

As that crusty old defender of the empire said many a year ago:

It has been said that democracy is the worst form of government except all the others that have been tried.   - Winston Churchill
Onwards! 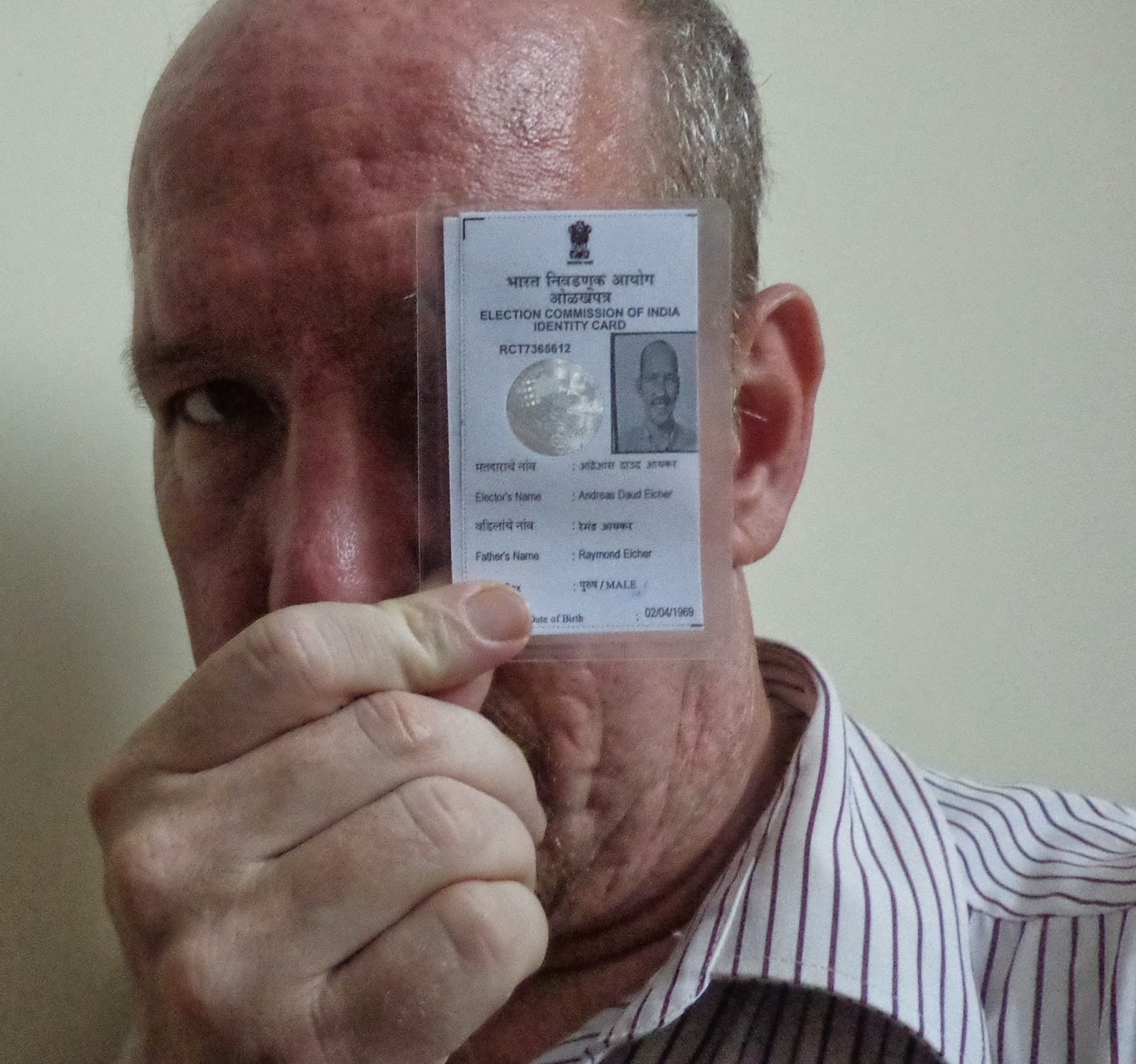 Posted by Andi and Sheba Eicher at 23:02