The sweet sound of democracy.

For the first time in my 45 spins around the sun I added my vote to those of my countrymen and women.

And it all took place in a wonderfully mundane way.

Early up.  Kids on holiday today as their school and just about every school in the city has been commandeered to be polling booths.

At about the time when I normally see the kids off in the school bus, I am instead walking the 5 min stroll to the local school where booth no. 95 of assembly seat 148 of the Maharashtra assembly elections.

Polls opened at 7 AM.  I was there at 7.20 or so.   It took me a bit to get inside.  A police man asked my for my voter's slip.  I showed him my voter ID (brand new).  He was not impressed.  I went back to the foyer of the school.  A cheery confusion reigned here.  Ladies were handing out the voter slips.  I asked for mine.  I was asked for my serial number.  I didn't know it.

I walked out to where I had seen some volunteers from one of the political parties.  They had set up shop under a tree in the courtyard of the school, near a police jeep.  They had printouts of the voter lists and were helping folks to identify themselves and their number.

As I waited my turn, a policeman walked up and told them to move on - to leave the premises.  They smiled and complied.   I followed them to the perimeter, only to find that they had a book of voters from booth no. 94, not no. 95.

I returned to the cheery confusion.  Then the penny dropped.  At the base of my voter ID card was my unique number.  Somehow the volunteers didn't twig this.  Once I knew that my serial number is 1332, I retreived my voting slip from its pile and walked to the 2nd standard classroom which was housing booth no 95.

A short wait as the two people ahead of me voted and then it was my turn.

I walked in past the policeman to a long table where 4 people were sitting and told them my serial number.  The first man found my record in the book of voters and checked it off and announced my number. The observers from the political parties who were sitting behind the officials also noted this.   Next I signed the register next to my number and the notification that I had a voter card as my proof of identity.   I was given a slip.  The lady who I met next asked me to put my left hand on the table.  She took a small plastic stick and applied ink on my index finger.  Half on the nail, half on the flesh.

I then gave the slip to the election officer.  She pressed a button and told me to go to the booth - a small inclosure at the end of the table which shielded the electronic voting machine.

And there I was.  I looked at the names and pressed the button.

Everyone in the room knew another vote had been added.

I was on my way.   The clock read 7.48 AM when I walked back in the door of our home for a quick bite of breakfast before I was out of the door again to go to JSK. 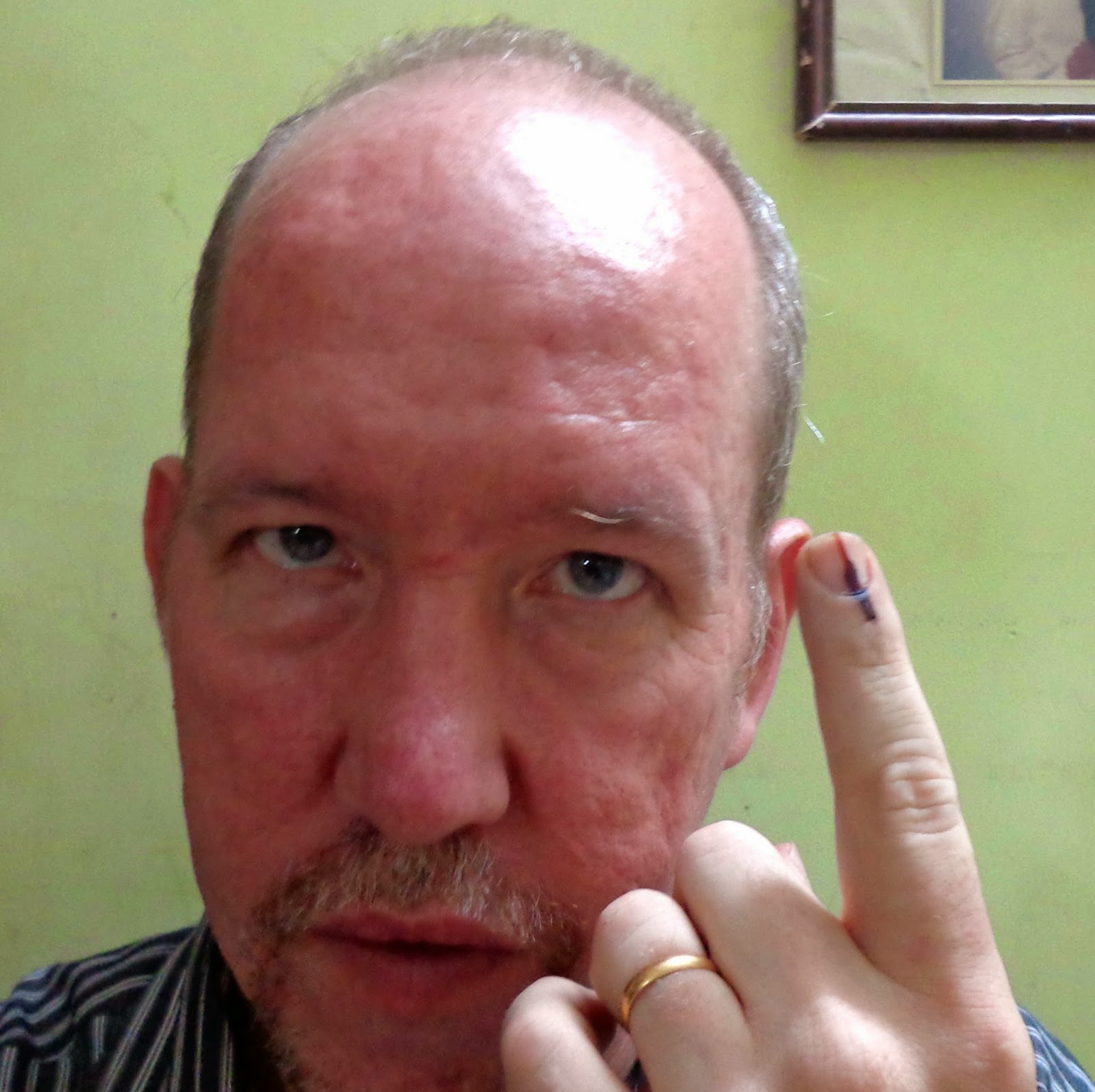 The beauty of it all lies in the ordinariness.  Normal people, rich and poor coming in and standing in line to vote.  Police and officials looking in and out.   Teachers and other coopted folks fulfilling their duties, seeing that people voted in an orderly way.  Men and women walking out of the school with their fingers inked.

We are reading through 'Freedom at Midnight' with Asha and Enoch - and I just helped Asha prepare for her history term exams - so it is fascinating to look back on our recent history.   The feuding kingdoms which the chappies from the John company took full advantage of sound uncannily like the political dynasties of today.   Most of the young politicians in our country are the sons and daugthers of established Pawars oops powers.

At independence the princely states were all but wrapped up - but for many it became a short hop, skip and jump before they and neo-ruling elites like them (nicely dressed in the khadi uniform of 'netas') took to the hustings.

That we have not been able to get away from the entrenched corruption that has come to plague our dear land and betray the bright hopes at the dawn of our independent nation (a mere 67+ years ago now - our young nation has already reached pensionable age) is a sad fact.

But at least we get to choose.  Both the hot favourites and the long-shot-dreamer candidates know one thing.  You wont get elected unless you campaign.  Our prime-minister has taken the time to address 25 public meetings to get folks to vote his party into power in our state - and another 11 meetings in Harayana.   All while a hurricane has devastated coastal Andhra Pradesh and the 10,001 and one other tasks of ruling our country have also been in his in-tray.

Because he knows, that who gets the 'beeeeps' gets to keep hold of power.

And being a clever man, with a well oiled political machine (far more savvy than all the other 4 parties who are duking it out with him in Maharashtra) he is appealing to our hearts to vote him and his party into a position where they can rule our state.

Sunday will will tell whether my beep counted in the final outcome.  But at least after multiple efforts to get on the rolls, today marked a tiny contribution by yours truly to chosing our rulers.  It is good to be inked at last!

Jai Hind!
Posted by Andi and Sheba Eicher at 23:13