Years ago... was it 2008 or so?  We were on the MV Doulos in Vishakapatnam.  And we bought some books (obvioiusly, there were tons - literally - on display).

One of them was Baking in America by Greg Patent.

A beautiful book with luscious pictures of cakes and loads of recipes.

We thought this would lead us to new culinary adventures.

It didn't.  Rather, it stayed safely on our shelves.  And for the last few years on top of the refridgerator.

The problem?  The ingredients.

We don't have many blue berries around.  Come to think of it.  Nor cream cheese.  Or non-alkanised cocoa or light all purpose flour as well as soft general flour, nor cranberries nor pecans....

Second problem.  The instructions.  Great if you have a gourmet kitchen with what have you widgets.

Not so great if all you have is a grater.  Ok, we have a bit more.  But our electric oven with a guess-what-dial-for-temperature on the front doesn't quite seem up to the heritage recipies that Mr. Patent eulogizes.

But all that changed last week.

As Enoch's exams came to their end (a long and drawn out affair that was), he began reading this book.  Devouring it.  He even took it to school with him.

We finally reached Friday (and a very tough Marathi exam that Enoch prefers not to talk about) - and when I got back from work Enoch announced that he wanted to bake.  Not one, not two, not three, but four different things.

He had made a chart where he pooled all the ingredients needed.  Then he checked to see which ones we had and which ones we needed to buy.  And then it was off to our trust D-Mart to pick up the necessities.

By the time we got back it was 9 pm - and we saw that most of his desired bakes needed yeast - and lots of time.  So we agreed to start the day with some 'Southern Biscuits' and instead listened to part of the 'Hiding Place' radio drama before we crashed.

And so this morning it was 'Southern Biscuits' for breakfast.  Hot, flaky (a few of them a bit needed to rise a bit more), but all round delicious.

No sooner was breakfast done than the next project started.

A Russian Cake Bread.  With yeast and all.   I wondered if it would take off.

And it sure did.  Part of it was allowing it to rise three times.   It was past lunch when we had our two heart shaped beauties ready. 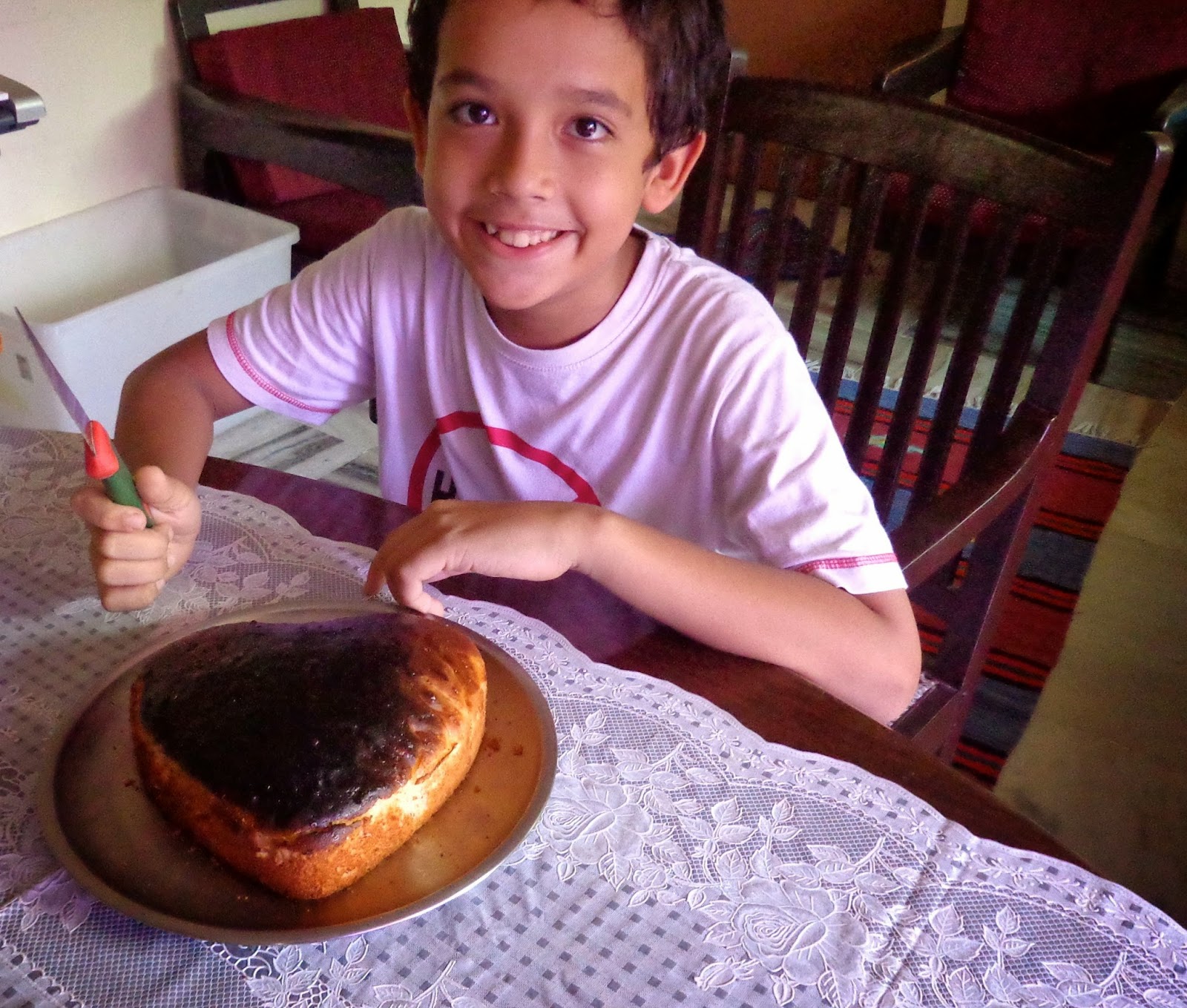 What next?  Enoch still had 'German Puffs' and 'Chocolate Donuts' on his list.  Both well in the realm of the unknown for us Eichers.

Amazingly, we found ourselves making dough for donuts.  More mixing.  More scraping.  More wondering 'will this even work?' as the recipe kept harping about having an oil termometer to make sure the oil was at least 365 deg. F. hot...  More cleaning (an endless round today).  And finally the batter in the fridge for at least an hour (that's what the book said to do... and so we did it!).

Finally to roll and cut the blessed rings.  What do we use?  We ended up using a metal lid from a spice container and Enoch's metal water bottle for the 'donut' hole.  The oil was hot and in slipped these new worlds for us - only to swell up nicely and be fished out soon after to drip dry and cool. 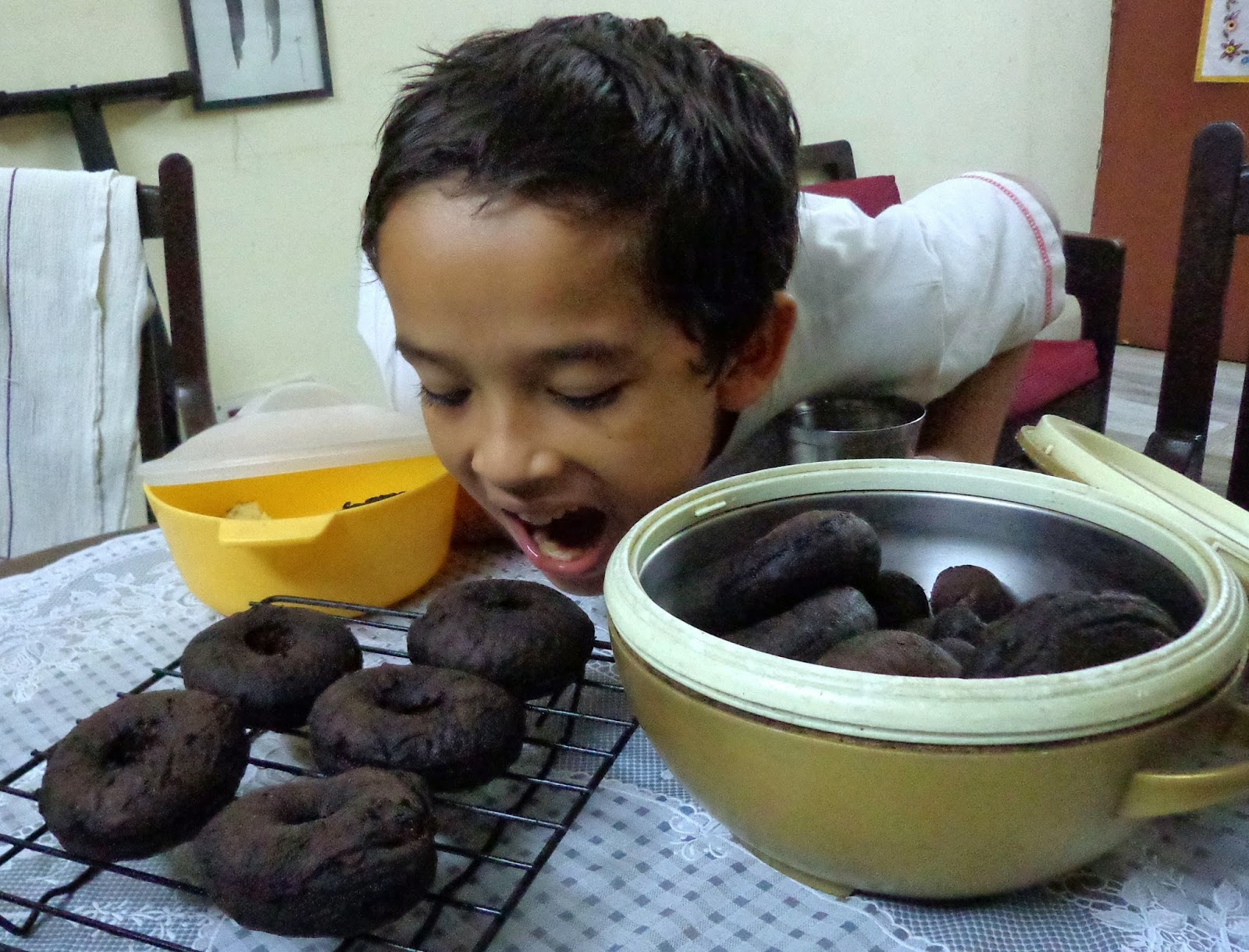 To our delight we are blessed with some of the finest chocolate donuts on this side of the big pond.

A goodly number of them have already dissappeared into happy tummies.  So many that our donut feast ended up being a basic dinner for 3/4 of the family (Enoch augmented them with some chappati and omlette at 9.30 PM as well).

And so the day ends.

After so many years of silence, the book has seen us bake 3 new recipes in a day (German Puffs will have to wait a little more...).

Hooray for Enoch - who would have thought it possible?

And so we leave you, gentle Reader, with this image of young Enoch: 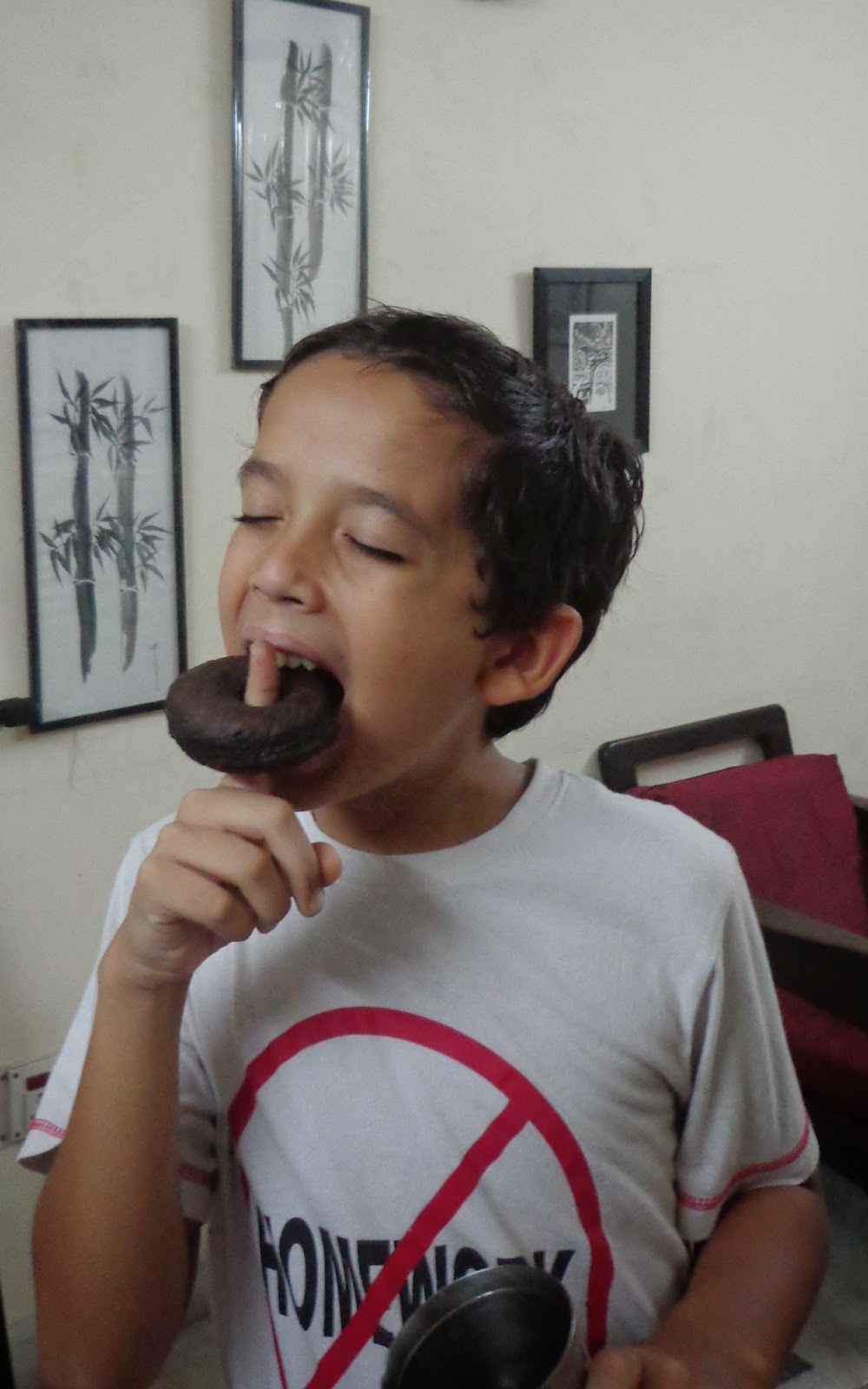 Posted by Andi and Sheba Eicher at 00:05