About 30 years ago my Dad made me a cake that I will never forget.

A birthday cake in the shape of a Volkswagen Beetle.

A 3 dimensional cake with foil for its bumpers and windows.

Last week it was Enoch's 10th birthday - and my amazing parents are with us to celebrate.  I realised that I had to make a tribute cake.  So Enoch got his own Beetle.

I asked Enoch whether he wanted an original model or the 2005 one - he chose the modern one.

So from the Eicher motorwerken - here is the Volkswagen Beetle - Enoch Eicher Birthday model! 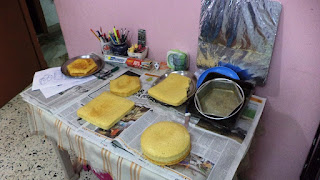 We start with the raw materials:  6 pans of Good plain butter cake from the hills - recipe sourced from the Landour Cookbook.

The base is a large duplo base-mat covered in silver foil.

For the colours, we add a few drops of food colouring as needed.   Cocoa powder mixed in when you want brown.   I started with an icing made 6 batches to start with and another 2 later. 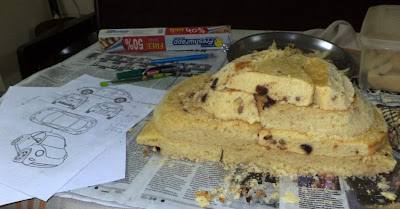 The basic shape is made by stacking up the cakes and cutting away.  Hooray for the internet which has line drawings of the 2005 Beetle!  Inspiration is just a click away! 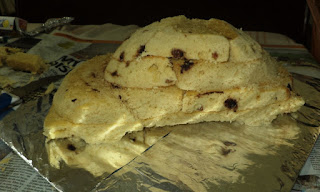 Once the basic cutting is over, its time to transfer it over to the base.

This was already fairly late at night, with the kids soundly asleep.  But since the birthday was the next day, necessity meant the midnight oil had to burn!

What would it end up looking like is the question that occasionally popped up in my mind.  But mercifully the joy of just trying to get it done swamped out any doubts.  Plus there is always the side perk of nibbling on the many small pieces of cake that were cut off.   This is one of the few times I have done a 3 dimensional cake, and I found myself cutting off far more than I thought I would.  Very glad that I had 6 cakes to work with! 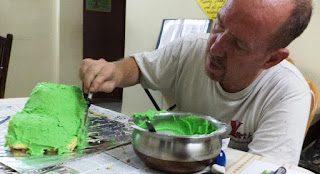 We decided that the basic colour would be a bright green.   For a brief moment orange was the front-runner, but then we thought that our own Nano is a papaya colour - and this was to be a VW Beetle, not a Tata Nano - so a completely different colour was chosen.

Green it was - and so the bulk of the icing had green food colour mixed in till the creamy white was a parrot green.  This took me well into the wee hours of the morning - and having done a complete once-over icing I decided that the details would have to come on the morrow. 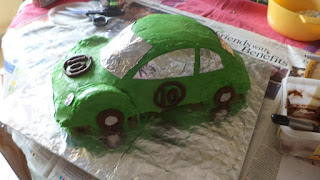 So after doing a half-day at JSK it was back to the cake.

The previous nights icing was smoothed out and silver foil cut out for the windows and other high-lights.   A batch of chocolate icing was rustled up for the wheels and the racing number - and also for part of the birthday wish.

Should I go for another colour?  A basic white....  no, lets go for yellow.

And so the final lines are put into place.   Time is running out with the guests expected in just under an hour.  But somehow, it all gets done. 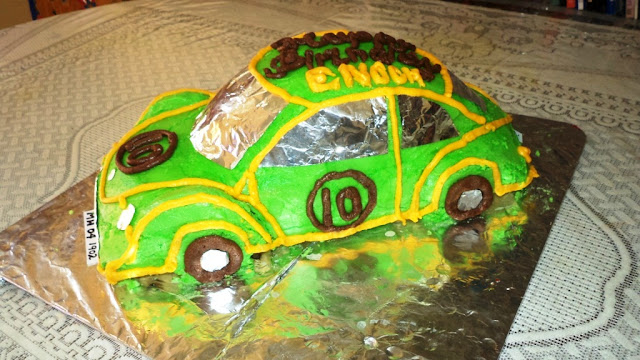 Birthday cakes are wonderfully ephemeral.   The exist and then they are eaten.  Afterwards they linger in the memory.

Over three decades ago, Dad making me a Volkswagen Beetle is something I still cherish.   Who knows whether around 2045 or so we may see Enoch Eicher making a cake in the shape of a bulbous car for a 10 year-old son of his own...

In the mean-time,  Happy Birthday Enoch! 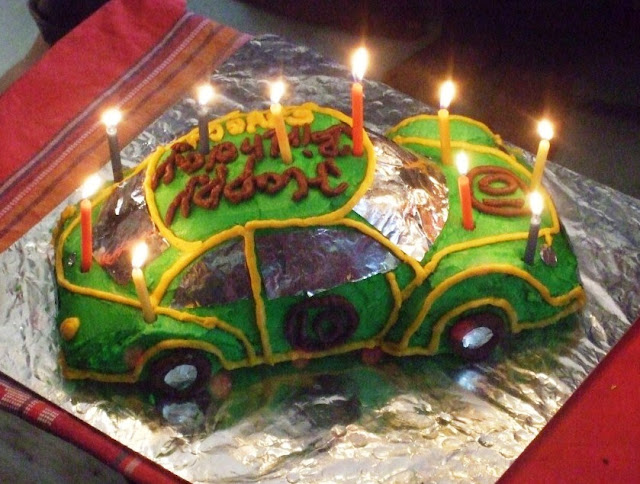 Posted by Andi and Sheba Eicher at 22:26