Saturday night. 11.15 pm.  I woke up Enoch - who had dutifully gone to sleep at 9 pm - and he, his uncle Stefan and I walked out into the cold Mussoorie night looking for a TV to watch the beautiful game.

Eh? What's that I hear you mutter.  Going out at odd hours of the night in pursuit of footy?

Call it a rite of passage. Call it a gentle madness.  Call it what you will, but when a big match is on - especially one of World Cup or Euro stature - there is a restlessness in the bones, an itching to somehow get to a set and soak in the sheer thrill of seeing 22 superb athletes throw themselves at each other and propel a simple round ball into the back of the opposing net.

On Saturday night - it usually is an ungodly hour as the economics of TV in the West have the magic 8 PM slot 5.5 hours behind us...  Anyway, on Saturday night it was the final of the Champion's league - played out in Munchen,

I normally would not do the nocturnal hunt for a club match - but this promised to be a fire-cracker of a match. And it was promise fulfilled.  Paisa wasool all the way.


Of all places, our nocturnal hunt took us to the lounge of the Rokeby hotel.  Once a mission guest house - under new management it has morphed into a beautiful boutique hotel - capturing the historic nature of the house (once a bungalow of the legendary Pahari Wilson) with all the charm of a superbly run hotel.  I spotted the bald head of one of my classmates on the porch - our Chaotic class of 87 held its 25th reunion at various venues across the hillside - and since Rokeby is being run by the elder brother of one of my classmates - they had congregated there for a nightcap and conversation.  Expecting them to stay on for the football we joined them.  However, when the witching hour came, everyone headed back home - and we were left- the three of us Eichers - with the large flat-screen TV and the stirring strains of a man singing something in Italian (Spanish?) and joined in the middle of the field by a punker playing an electric violin and surrounded by a bevvy of lasses waving Chelsea FC and Bayern Munich flags. 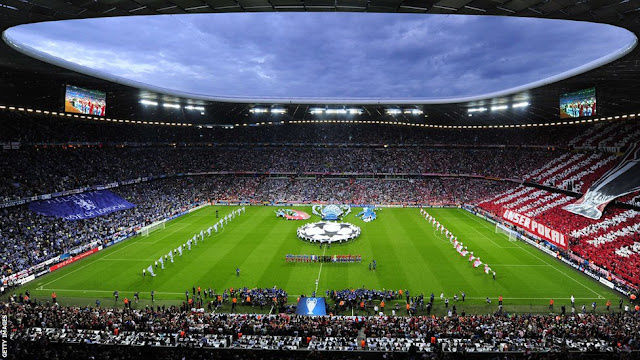 So far so goofy.  As you can see from the shot above, the Alliance Arena in Muenchen was awash with red (for the home team Bayern) with significant swatches of blue too (Chelsea's supporters).  The whistle blew and the game began.

To us to whom football is largely a matter of hopeful long shots down the field, it was jaw dropping to see the precision with which the ball moved over and over between the men in red.  Wave after wave of attacks went forward into the Chelsea half.  Impossible sequences of the ball probing forward, being passed with needle-like precision, probing ever onward.  Shock and awe.  The blues seemed almost spectators - time and time booting the ball away from danger - giving away a flow of corner kicks as the red machine ground out its awesome advance.

Disclosure time here.  Yours truly was 'supporting' the Bavarians, young Enoch rooted for Chelsea - and uncle Stefan did not reveal his loyalties.  Having the lions share of the German national team playing in red (Lamm, Steinshweiger, Neuer, Gomez, Baoteng, Mueller) pushed my sentiments red-wards.

Amazingly Chelsea held on. Time and time again Bayern came to the threshold but just did not convert.  Shot after shot went wide, or high, or was saved by the athleticism of Petr Chec.  The half time score was 0-0 and it was only a matter of time before Ribery or Robben would find an entry.

Their counterpart - the talismanic Didier Drogba was alone in front for Chelsea - with hardly a sniff at the Bayern goal.  Too often we saw him back - helping out on defensive duties as the reds continued to pass and press at will.

Time was slipping on and the final was into the last 10 minutes of normal time when the break-through finally happened.  Thomas Mueller managed to head through Petr Chec and the contest looked over.  Muenchen were about to add a fifth star to their uniforms as the reigning European club champions.  The goal scorer was taken off soon after and replaced with a solid defender as the reds started to wind down the clock and start their celebrations.

But is was not to be.

In 1994 I had watched amazed from the stands of a stadium in New Jersey as Roberto Baggio managed to score a last-gasp goal and save Italy from exiting to the imperious Super Eagles of Nigeria - and then seal a win in overtime.

Something similar was in store this night in Muenchen. 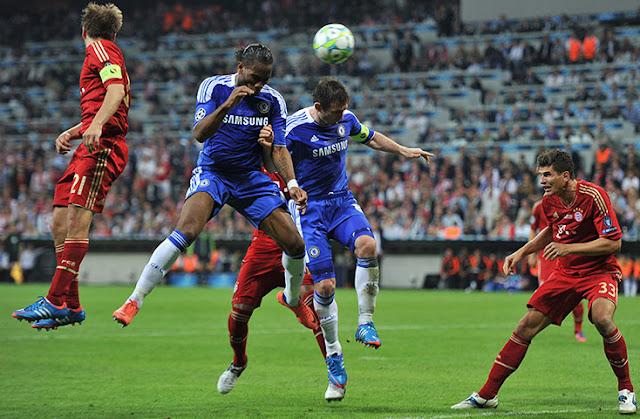 The old war horse - Didier Drogba did what great players do.  He rose to the occasion. In the 88th minute. Somehow Chelsea won a corner kick - and they made it count - in a sea of red players Drogba managed to get his head and the ball and rifle it into the back of the Bayern goal.

You just had to rub your eyes and ask yourself... did I just see that?  But the evidence was there - the ball in the back of the Bayern net.  Drogba sprinting off for his victory dive.  Mobbed by his fellow players. Nail-biting time as the whistle blows for over time. 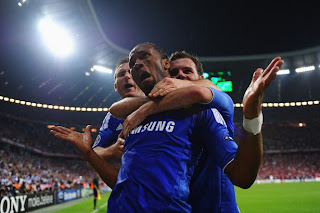 Then again another heart-stopper.  Drogba gets a yellow card and the referee points to the spot.  Bayern's battle-scarred Dutch international Arjen Robben steps up to shoot - but Petr Chec checks the shot.  More heart in mouth time as the early morning starts to creep in and we 3 musketeers remain glued to the events unfolding in Muenchen.

After 120 minutes of playing their hearts out both teams limp to their part of the field for the penalty shoot-out.  Again Bayern go one up with the first shot of Chelsea stopped by their goal keeper Manfred Neuer.

When the third Bayern player came to kick I thought it was over for Chelsea.  The player taking the kick was the Bayern goal-keeper Neuer himself.  His shot was true.  One goal keeper scoring against another.  I did not think that Chelsea could come back from a goal down at that point.

The last two shots on goal by Bayern were stopped by the ice-cold Petr Chec who dived the right direction each of the 5 shots on goal.

As we stumbled back in the darkness to Shanti Kunj, with the blessed cold of a 3.30 am in Mussoorie biting into us, we marvelled at the game, turning over the phases and savouring the epic.  The beauty of the passing, the depth of the emotions, the unlikeliest of outcomes - the beautiful game.

Posted by Andi and Sheba Eicher at 13:16