Though Thane is an urban sprawl with a good 2 million or so folks living here (we will find out next year when the census results are published) - there is still place for nature and growing things.

Just near our house - we have the low Pokhran hills - which are the Eastern border of the Sanjay Gandhi National Park - the green lungs of Mumbai!

And last week we also had a full-fledged farm... in miniature of course... 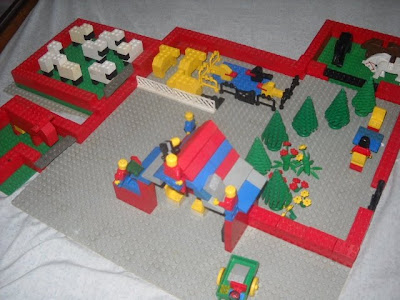 Enoch was hard at work again with the legos (the pictures of this are now the only record it was made - he has already recycled the bricks for his next set of projects...
But 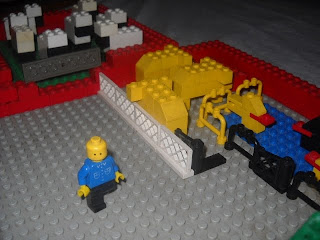 On the farm that Enoch made, however, Mr. Farmer goes for a walk to see how his animals are doing.

The sheep, pigs and ducks are doing mighty fine. In fact, looking at their size compared to the farmer, you might wonder if there is any doping going on - they look like they are all on steriods!

But then who am I to say - the lego farm has certain challenges that are scale dependent. Its not possible to make recognisable animal models below a certain size threshold! But it is just this limitation that combined with the durablity and connictability of the whole set - which for me enthrones lego as the 'king of games.' 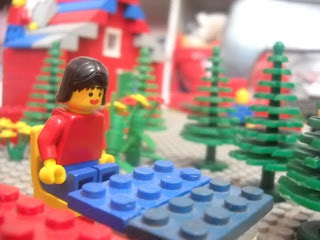 In another part of the farm, Mrs. Farmer takes a small break at the picnic table in the park.

Its not easy being a lady on the farm. The work is never ending it seems - so it is a real blessing to be able to get away from it all every now and then!

Would that Mrs. Farmer's example be followed by us in real life - by the chap whose hands are banging the keyboard at this minute - who really needs to go to bed!

The peice de resistance for me was Enoch bulding a set of men actually repairing the roof of the farm-house. Its one thing to make something and break it. Little boys seem hard-wired toward that sort of thing - but which little boy builds something that is restorative in nature? There is obviously a grateful and slightly-in-awe Dad voice coming through in the previous sentence! 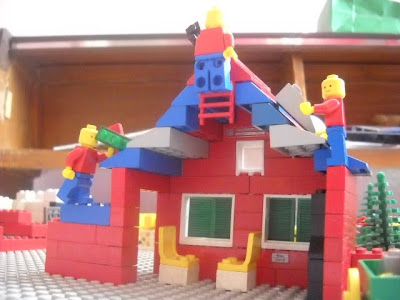 Posted by Andi and Sheba Eicher at 23:23