We are on a diet of Luther right now in the Eicher household.

A book fair which I managed to squeeze an hour in to grab 2nd hand books at rock bottom prices yielded two on Luther.

Kitty my Rib by E. Jane Mall is a fictionalised biography of Katerina von Dora - who became Katherine Luther after her marriage to 'the good doctor' Luther.

The book takes a breezy look at the life of an extraordinary woman - who left the nunnery and ended up marrying the ex-monk who had set the wheels of her own escape into motion.

The other book - Here I Stand: The life of Martin Luther (available online by clicking the title) - is by a scholar Ronald H. Bainton and gives a dense but concise picture of Luther and his time.

Both books were written in the 1950s. "Kitty my rib" is a straightforward telling of a domestic story. The author tries to put herself into Katherine's shoes - and comes up with a story of a woman who yearns first for freedom - and then for affection (and receives some) - and who lives a hard life caring for the good doctor Luther. I came away feeling that I know more about Katherine - but also about what the author feels is important in life and relationships: freedom, appreciation, intimacy. The big issues of Luthers life rumble on in the background - Katherine's world seems to be circumscribed by her family - and her desire to retire in a nice plot of land.

"Here I Stand" works hard to put the facts down - and paint the picture of the times. To be honest - Sheba and I are just starting into it - but I can already tell that it is written with more than a whiff of earnest 1950s modernism.

Both books gripped me and also left me hungry for more. Ultimately we will have to ask the good folks themselves when we meet up in eternity.

From the "Kitty" book we get the extraordinary picture of the Luthers ministering twice during plague outbreaks in their benighted little village of Wittenberg. We are so insulated today from the terrible fear of disease outbreaks. Where parents would abandon sick children - and vice versa. Where children would be found 'breathing on' their siblings - because it was thought that that the action of 'breathing' on an unifected person would free one of the disease.

The Luthers went house to house - morning to night ministering to the dying, caring for the sick as much as possible, helping to bring out and bury the bodies and consoling the greiving. All this without thinking that they were 'too important' to be exposed to the danger of dying themselves.

Martin Luther had many faults - but what a picture of courage and pastoral care we get here. How flippant and shallow so much of our so-called 'service' is when measured with this plumbline. You hear the echo of our loving Master who said - "It is not the healthy who need a doctor, but the sick. I have not come to call the righteous, but sinners" (Mark 2.17).

The other find from the "Kitty" book is a sympathetic look at Luther's bouts of depression. A life-long set of episodes - it shows up as a cloud in the family. I would wonder how much of Luther's depressions were public knowlege at the time - something that mirrors what so many of us struggle through - in our own lives - or in the lives of those we love very much.

The genius of Bainton's book is to place a finger (a slightly cool one at that) on the intellectual / emotional struggle Luther has with his sinfulness. Bainton is dead on the money when he highlights that it is Luther's deep religious hunger - and his tortured dissatisfaction with everything that his relgious disciplines and understanding of the time - that drive Luther to the unexpected set of end points where Luther discovers the Bible in a revolutionary way. Particularly helpful for me was the brief discussion of how after confessing for hours at a time - Luther would end up being reminded of some other sin he felt he committed. Bainton suggests that what horrified Luther even more was the realisation that much of sin did not even bring remorse - Jonah sleeping in the ship as a case in point - which lays the foundation for an understanding of sin not as individual acts to be catalogued and then dealt with - but an underlying nature...

Lets see what else we will find out as we travel with Bainton through Luther's life.

Books take us to different places. 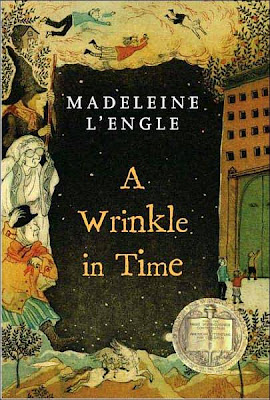 They offer a commentary on our own lives. As we think through what we read (and we certainly don't need to agree with everything that is printed black on white) we gain insights into our own situations.

Plus the best books end up talking with each other - and most of all with the book of books!

Case in point is what we have just finished reading as a family - Madleine L'Engle's most excellent A Wrinkle in Time. It fairly drips with meaning - while taking you across space and time - and leaving you hungry for more.

On our bookshelf sits a huge red one-volume book that all of us are itching to read together - The Lord of the Rings. Alas we just do not have a span of a few weeks opening up for us to read through it. We know that once we delve in - we will not be able to extricate ourselves till we have read every page of it.
Posted by Andi and Sheba Eicher at 01:02