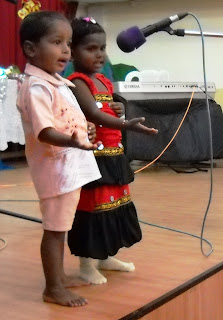 Both the children of women who were used by men in prostitution.

Timothy - as we will call the boy on the left - has already seen far more than any little boy of his age should ever see.

His mother left the brothel last year and accepted the offer of rehabilitation at a small centre close to JSK. His mother is HIV positive - but he is not.

After some time at the centre, his mother seemed to be doing well - and little Timothy was the cynosure of all eyes.

One day his mother told the supervisors at the home that she wanted to go to her home village. The supervisor bought her a ticket and some days later accompanied her to the train station and waved good-bye as the train with little Timothy and his mother left the station headed for the South.

A few weeks later - after not hearing anything from Timothy's mother, the supervisor got a shock. A team from Bhiwandi came and asked why the woman who had left the brothel there was back plying her trade.

The supervisor was crushed. When we heard about it we were terribly saddened. Timothy's mother had played an elaborate ruse - and had gotten off the train a few stations further and gone back to 'the trade'. Little Timothy - as with many children of prostitutes - was placed under the bed when his mother had customers. A bad scene.

And amazingly, some weeks later, Timothy's mother returned - along with Timothy. The folks at the rehab centre had the grace to welcome them back - and now this little flame of a boy is back to blossoming as he had been.

We were blessed to have Timothy sing and dance with his little friend at the JSK Thanksgiving time last week. He is a living miracle. In the midst of darkness there are lights that shine.
Posted by Andi and Sheba Eicher at 15:55