6 ways to change the world 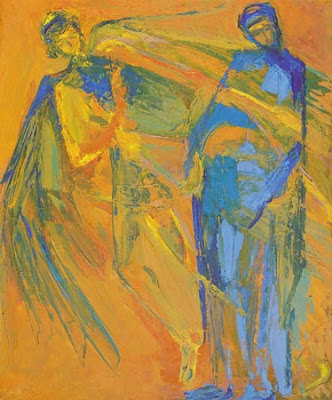 I had an amazing experience this afternoon.

We conducted the second session of the current batch of Training in HIV care for church members. This batch is a particularly youthful one with at least 15 young people from a single church making up half of the group.

Sanjeev - one of our staff - made a suggestion before our first session. Lets make each person make a commitment card - on which they will write one thing that they plan to do over the next 2 weeks to help people with HIV. One half will remain with the discussion group leader - and one the participant will keep as a reminder. We took up the idea - and asked the group leaders to call up their members after a week to see how they were getting on.

I sat in on Sanjeev's discussion group this afternoon and was astounded.

There were 5 ladies and a young man.

This is what they did over the past 2 weeks:

1. The first lady to speak is a long term contact of ours. Her daughter and son-in-law have HIV, whose sister has HIV and who looked after her sister's boy before he died. The other group members do not know these things of course. This lady shared that she has been praying for a small village near where she lives. She has noticed that many of the young men their are 'slim' and are being treated for TB. She is convinced that a number of them have AIDS. This week she talked to her pastor about starting something there. The pastor was very open and went to the local municipal corporator and asked about getting some place where the church could start some kind of a clinic or counselling spot. Amazing!

2. The next lady shared how she and another church member had attended a monthly support group meeting for positive friends at the Free Methodist Church in Andheri. It was a deeply moving experience for her to hear the suffering that many have gone through and be able to talk and pray with some of these sisters with HIV.

3. The third lady said that she had told two of her neighbours all about HIV/AIDS, based on what she had learned in the first session. She was particularly concerned because she did not know whether their husbands were being faithful to them - and told them that it was very important for them to find out.

4. The next young lady had gone to a person in her neighbourhood who was very sick with cancer. They had gone there to pray and found out that her husband had been ill-treating her and was drinking a lot. They spent time with the lady and prayed with her. Early this week that lady died.

5. The fifth lady is working with a sister organisation of ours which does a lot of work welcoming women who are on the margins. We know that she is HIV positive herself, though I am not sure how much she had shared about her own status to the other group members. This lady had gone to the JJ Hospital in south Mumbai as part of her work she does with women who are in prostitution. While there she saw a woman with a child. The woman was crying hysterically. This sister went to find out what was the matter. She was HIV positive and was being harrassed at home and did not get the medications she had hoped for. "Please give me some medicine so I can give it to my child and kill him and then I will kill myself" The woman kept crying and shouting. Our friend talked with her. She tried to reason with her and tell her that they would try and help. Finally she persuaded one of the social workers there to come with her and the lady home. When they got to the door the mother-in-law refused to let them in. "Who have you brought? We don't want you" she told the lady. After some cajolling (and many silent prayers from our friend) the mother-in-law let them all in. Further conversation and helping her understand cooled the situation more. The lady wanted our friend to wait till her husband returned as she was afraid he would beat her like he normally did. Our friend assured her that God would help and left her mobile number. Later that evening the phone rang - the lady calling to say her husband had returned and for the first time was calm and decent with her. How much God can use his children!

6. The final person to share was a young man. He said that he had a relative who had stopped coming to their church. He had heard that this relative had HIV. He went to visit him. The visit was not easy, but his relative was very touched - and promised to start coming back to church again. The first step has been taken. A new level of relationship established.

Six people. Six promises made. Six solid attempts to come through. Six ways that God has used his people to set the world a little more right-way-up.

Amazing.
Posted by Andi and Sheba Eicher at 23:11