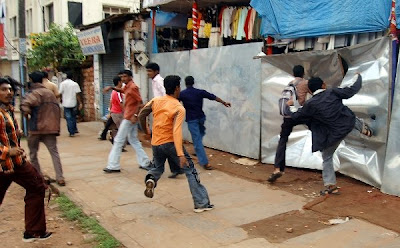 Mukul Kesavan is one of our better writers. He teachers social history at Jamia Islamia in Delhi and wrote a superb book Looking Through Glass in the early 1990s. Very well worth the read. Here is a recent article by Mukul. See also the excellent (though slightly wordy) article by Pratap Bhanu Mehta in yesterday's Indian Express by clicking: here.

From the Telegraph, Kolkata, September 18, 2008 http://www.telegraphindia.com/archives/archive.html

An articulate sangh parivar ideologue made the point at some length in a television discussion. Foreign churches had plans to convert Asia, the one continent where Christians were a tiny minority of the general population. Missionaries distributed pamphlets offensive to Hindus, they channelled funds to Christian Trojan horses in India, they preyed on ignorant tribals and the poor, and slyly induced them into Christianity. This was monstrous because it took advantage of Hinduism's tolerance, its non-missionary nature. Why did Christian missionaries not try to convert Muslims? Because they knew that Muslims would resist violently. So the recent attacks on Christians in Karnataka ought to be understood not as gratuitous violence, but as an instance of the worm turning, the hitherto supine Hindu saying enough. The Bharatiya Janata Party spokesperson concluded by saying that he deplored all violence, and clinched the matter by telling us he was vegetarian. Yes, that follows. Hitler must be the exception that proves this rule.

A letter in my mailbox amplified this line of argument. It detailed the unspeakable things a missionary pamphlet had written about Hindu gods and goddesses. Provoked by this, Hindus attacked not churches, but illegal prayer halls in three districts in Karnataka. In fact, the violence in Karnataka, according to this sangh parivar sympathizer, wasn't communal at all. Most of the violent incidents were best seen as clashes between Christian gangs and the police. "Since the past two days, it is not Hindu-Christian clashes that are taking place. In fact, it is more appropriate to call it 'Christian-Police' clashes since the Christians holed up in Churches have engaged themselves in pelting of stones and disruption of traffic. The Police were forced to enter the Church to clear the mob and they found arms inside the Church."

So by the time the Hindutva account of the attacks on Christians is done, it turns out that it wasn't Christians who were attacked by Hindus but the State that was attacked by Christians. And any violence done by Hindus was aimed not at Christians or churches but was provoked by missionaries and their 'unauthorized' prayer halls, their 'illicit' conversions and their blasphemous pamphlets.

This isn't the position of a few talking heads on television or some whacko on the web. This is, broadly, the position of the government of Karnataka and of its spokespersons who have consistently tried to frame the clashes in terms of missionary aggression and have systematically downplayed the violence Christians have suffered. The BJP leader, Murli Manohar Joshi, defended the inaction of the BJP government in Karnataka and insisted that blaming one side (read Hindus) was wrong because conversion was violence done to the Hindu community. There's also a public constituency for this argument. I heard a Sikh friend based in Karnataka say "But, it's true you know, they were converting." I've noticed in recent times a tendency (even amongst liberal and otherwise pluralist people) to be understanding of this kind of plaintive prejudice. A defence of minority rights is often prefaced by a qualified disclaimer, with the nuanced liberal declaring that he himself finds the idea of conversion distasteful, but...

The fact is that our liberal's opinion, and the opinion of others who object to missionary work and conversion, ought to be of no public interest because it contravenes the fundamental law of the land. The Constitution of India guarantees everyone's right to practise and propagate his or her faith. So if the Arya Samaj wants to purge Muslims or Christians of their 'alien' beliefs through shuddhi and claim them for Hinduism, it ought to be welcome to do so. If some evangelical fundamentalist has decided that the lower latitudes in Asia don't have enough Christians, good luck to him. If the Indian electorate is agreed that foreign missionary funds are a bad thing, it can press the government to ban such funds: it would, of course, have to stop the funding of all religious groups, not just Christians. Similarly, if Hindus are offended by missionary religious literature and feel that it constitutes an incitement to hatred or violence, they should prosecute the culprits under the sections of the law that make such incitement illegal.

The continuous use of synonyms like illicit, illegal and unauthorized seeks to criminalize religious minorities and their institutions. Over the years, this effort has achieved a measure of official sanction. Many states like Orissa, Madhya Pradesh and Tamil Nadu have adopted the Freedom of Religion Act, which is intended to restrict conversion on the presumption that most people are made to change their faith through inducement or coercion. These acts were challenged in the Supreme Court, which, under the leadership of Justice A.N. Ray, upheld them after studying the constitutional term 'propagate' and discovering that it didn't mean a person's right to spread his religion by converting others to it.

The result is that the freedom to voluntarily change your religion (which the Constitution guarantees) is now policed by the junior functionaries of the State. A police inspector, authorized by a district magistrate, can investigate pending conversions, for which notice has to be given to the district authorities. The DM has to maintain a register of religious organizations involved in missionary activity and has to send the government, by the 10th of every month, a report about any proposed conversions.

The germ of this law, namely the suspicion that conversion is fraudulent unless proven otherwise, is contrary to the basis of any civilized system of law, the presumption of innocence. In the matter of religious choice, if you're an adult in Orissa and happen to be classed as SC or ST, you are infantilized and treated as a ward of the state, incapable of making an informed choice in matters of faith without supervision and tutelage. It also allows governments like the government of Karnataka to duck their basic obligation to protect the lives and property of their citizens by ignoring actual violence against individuals and deflecting attention towards some nebulous conspiracy to aggressively convert Hindus.

But worst of all, this bid to criminalize proselytization in the present impugns, by implication, the historical origins of Christians and Muslims and Buddhists in India. If legitimate conversion can only be guaranteed by a 'Freedom of Religion' law, it follows, does it not, that earlier conversion, unsupervised by this present-day Daniel, the police inspector, was likely to have been illicit, illegal and unauthorized? So are we to believe that Vijay Hazare, Chandu Borde, Pandita Ramabai, Mary Roy, P.C. Alexander, B.G. Verghese, Dom Moraes, V. Kurien, Sushil Kumar Rudra and the hundreds of thousands of Christians born before the first Freedom of Religion Act was passed in 1967, owe their identity to coercion, inducement, fraud or some other form of bad faith?

If we don't believe that, we should insist that state governments in Orissa and Karnataka and their police forces spend their time protecting their citizens against violent and criminal assault instead of policing their consciences. We should shame them into accepting, without qualification, this simple truth: killing Christians, like killing any human being, is wrong.

mukulkesavan@hotmail.com
Posted by Andi and Sheba Eicher at 23:48