We love celebrating - and when it's Asha's birthday, then the celebrations start early and continue for a goodly length of time.

This year we had Oma and Opa with us over Christmas and New Year's.  Before they left we celebrated Agnes' birthday on the 4th of January ... 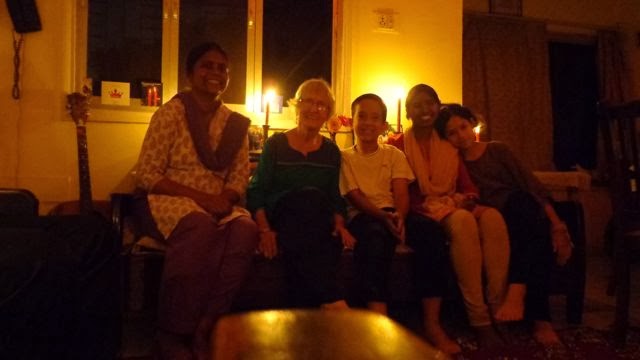 ... as well as an advance B-day with Asha and Enoch later that night.

On the big day when Asha turned 13 we had our early morning family celebration, as well as a surprise for her after her normal Thursday evening violin lesson.  Enoch and Sheba were waiting with 13 roses for us at a restaurant that Asha and I 'happened' to walk by (Asha said that she had her suspicions...). 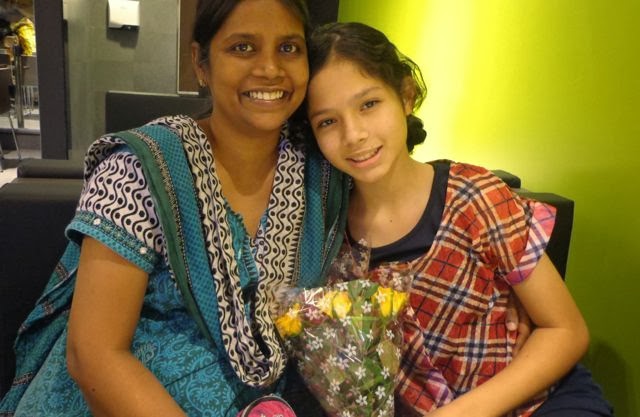 The next day was Friday, and we hosted 2 excited sets of sisters for a sleep-over.   The not-so-secret-Seven of them played Pictionary, read, talked, ate and had a whale of a time.   Sleeping seems to have been low on the priorities with Nikita and Jasper as well as Kirti and Nitya making it quite the night of laughter. 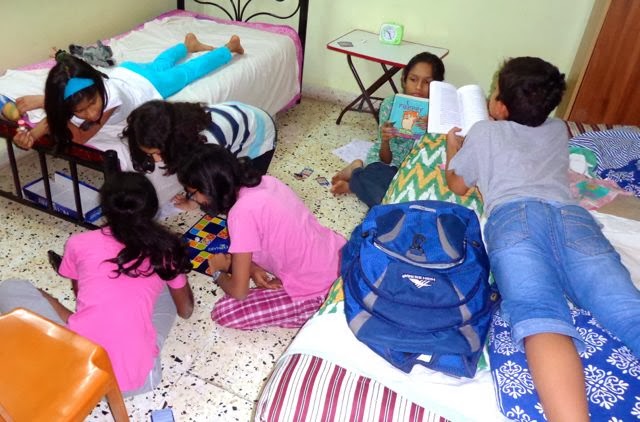 Enoch joined in for most of it but faded shortly after mid-night.  I was working on the cake and when I finally finished cleaning up it was past 1 AM and the girls were still going strong with gales of laughter.

The next morning was the party - and so the girls reluctantly did some sleeping...  A pancake breakfast got them up and energised to put up balloons and streamers.   The cake was brought out - this year's edition being a treasure chest to illustrate the over theme of each one of us being a precious treasure... 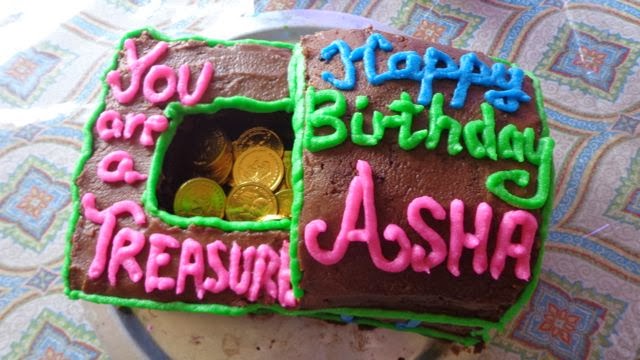 We did something new this year - a 10 AM party on a Saturday morning - and despite what some said, Asha's friends were soon trooping in.

Of course we had to play games...

Finding out your 'real name' using only questions that can be answered 'yes' and 'no' is a good one for different groups to get to know each other!


The animal clapping game was a new one for many in this year's group. 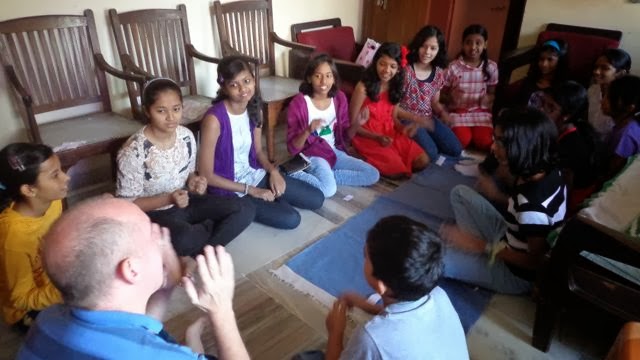 Eating chocolate after you roll a "six" and getting 'dressed up' and only using a knife and a fork... until the next "six" is rolled is an old favorite that Asha specifically wanted (and as a birthday girl actually ended up getting a good many pieces into her mouth!). 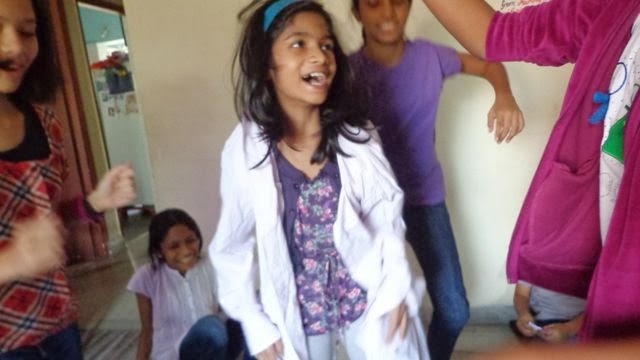 In keeping with the theme for this year, however, the 'biggest' game of the day was a treasure hunt - the first time we have done one here...

Thirteen clues had the group wandering far and wide, and exploring parts of the complex that are well off the beaten track. 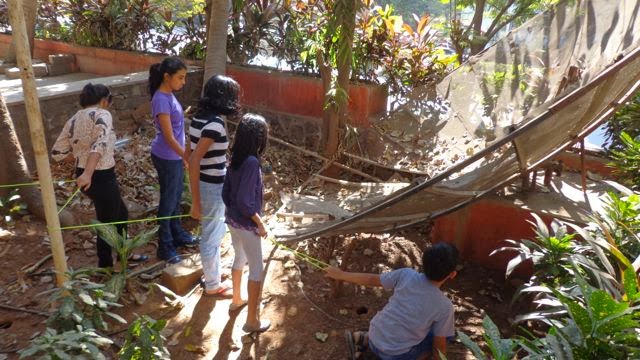 It was a beautiful day to be outside, and we made sure that every nook and corner of the Lok Upvan Phase 1 society compound was well covered by the 14 youngsters being sent to different parts of the grounds by the clues they discovered. 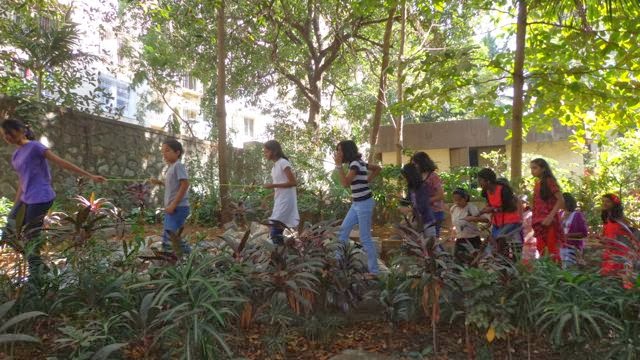 ... and finally ending up back in the flat with the 'treasure' being a box of animal chocolates that was hidden on top of the fridge.

We wound off with a time of sharing about just how precious a treasure from God that Asha is to us - and how each one of us is so very valuable - and how vital it is for us to guard the treasure we are.

On the other hand, on the theme of 'treasure' we also explored how Jesus told a story of the man who found a treasure in a field - and the man was willing so sell everything he owned in order to buy the field.  There are times when we may do things that seem silly - but have real meaning - because we know that they have value far more than what seems so on the surface. 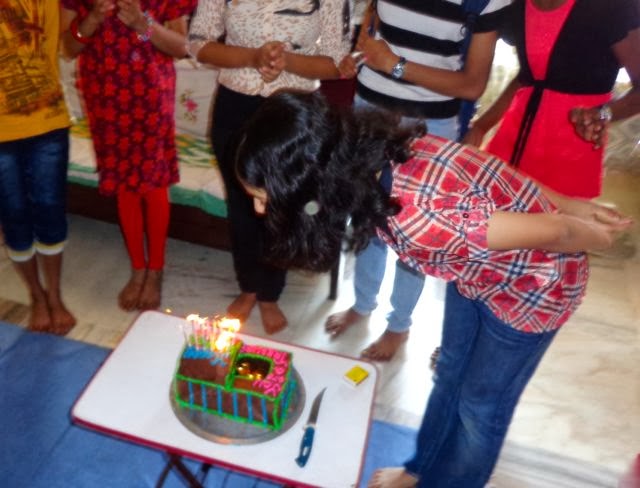 A short break had the girls oohing and aahing over the hamsters (down to only 2 - with Cinnamon and Garlic holding fort since we gave Nutmeg, Ginger and Jeera away to the Andy Bose family).

Sheba had to go over to JSK to see a patient, but on her return she prayed for Asha, we had the traditional song and blowing of candles.

Speaking of treasure, here is one that Asha has been blessed with since we moved to Mumbai 12 years ago - her dear friend Nikita who is only 4 months older to Asha. 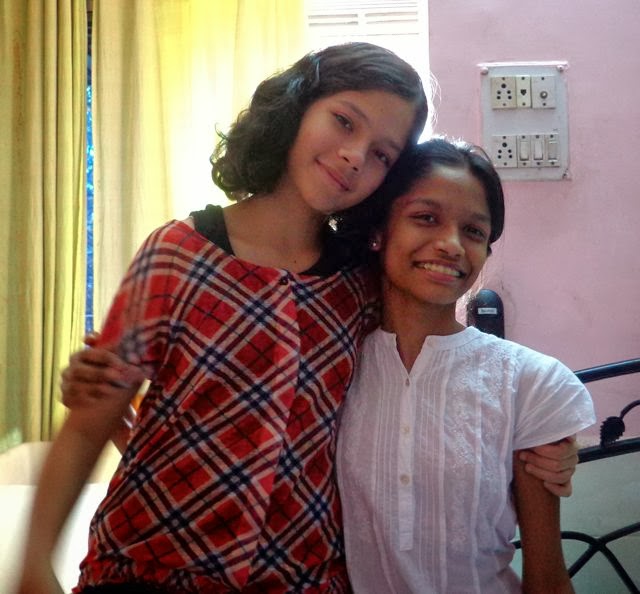 This year Nikita brought along a most extra-ordinary card - a massive 3-D object decorated with some of Asha's baby photos and celebratory messages from all of us hanging down and a cutout figure of Asha reaching out for it. 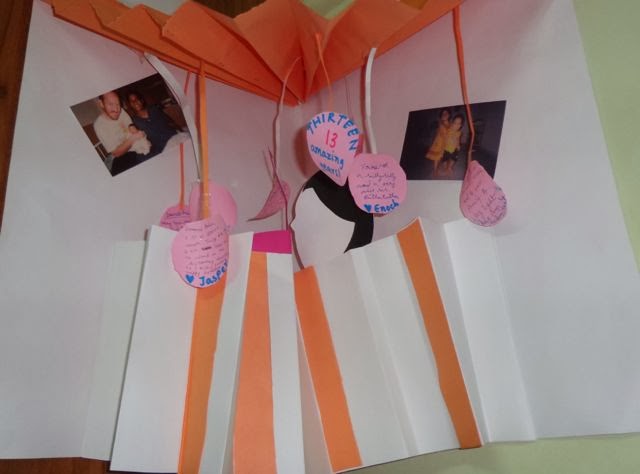 This photo does poor homage to the card that has been put up in a corner of Asha and Enoch's room.

The party itself ended with hot 'wada-pao'  the ubiquitous 'Bombay-burger' which we all love so much.  Our dear Asha David had been with us since morning, cooking up a storm of these savory treats as well as a large vat of fried rice - both of which the Eichers have been feasting on since the party thanks to our large fridge! 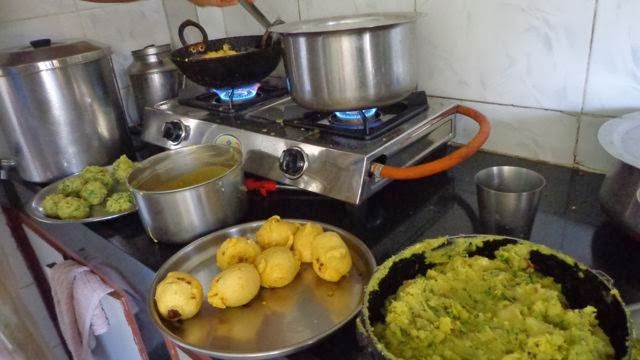 But wait, the celebrations were not over.   Coming in just as the last of our young guests of moving out - a new friend Ekhard Hitzer proved to be another memorable part of Asha's special day...  Ekhard is the nephew of our dear friends Stefan and Maria Winkler.  He is a professor of theoretical physics at the International Christian University in Tokyo, is married to Eriko - a lovely Japanese lady, has two teen-aged boys Isaiah and Joshua and was passing through as he is presenting at a physics conference in Nagpur this week.

Enoch was thrilled that Uncle Ekhard brought a new lego fire truck for him.  Enoch's Daddy was fascinated by what his son had made...   Look out for a long-overdue 'lego posting' on this blog soon... 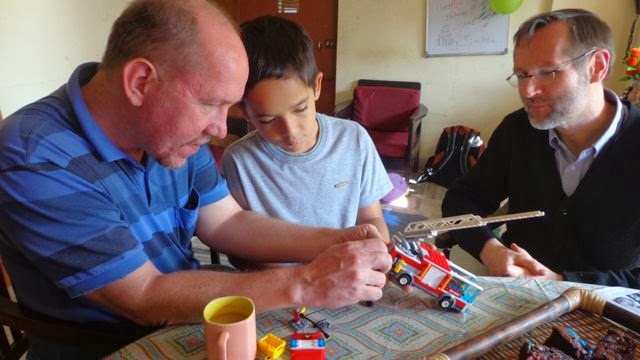 And so our celebrations came to an end ... or shall we say a pause.   Enoch's birthday is exactly one month away...
Posted by Andi and Sheba Eicher at 23:08