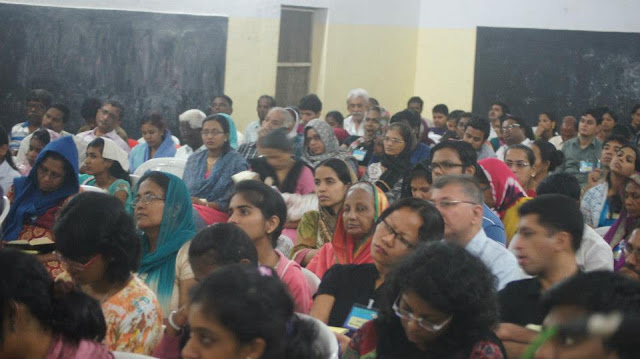 Did you hear the mountains tremble?

We spent 3 days in Khandala over Diwali at our church Family Bible Camp.

What an experience it was.

People came from near and far.  Ages ranged from 8 months to over 80 years.  Over 250 souls streamed in - about half of us from the 6 house-fellowships we are part of - and the others from a wonderful variety of different groups - including a group from Gujarat and folks from Hyderabad too. The traveller who came the furthest was our dear Arbind Singh who made the 3 day journey from his airforce posting at Shillong.

The theme for the camp was 'after God's own heart.'  This rich vein of truth was mined throughout our time together as we explored what being shaped into God's own character is like - and what it means in our daily lives.  David was a man after God's own heart.  Though far from perfect, he yearned for God, seeking to be transformed, and living a life that challenges us to follow God in every way.

The true man after God's own heart was the Lord Jesus Himself - He who emptied Himself of all but love and lived among us so that we could see God.

What a joy to have Philip B teach from the Bible in the mornings.  His slow, thoughtful, irenic exploration of the glorious truths in scripture was a delight to hear.  I found myself drinking deep.  After a tea-break Phil took the same passage in Hindi.  While one of the groups was getting their fill of Phil - the other group was split into small groups for discussions.  I facilitated a group of 'purity and purpose' and was amazed to see how much of what we discussed resonating through the camp.

When we talk about being after God's own heart  we just cannot get around His utter holiness. Stanley Nelson - who shared in one of the evening meetings - brought this out in a fascinating way.  He suggested that when the apostle John sees God surrounded by the elders and angels he also hears them proclaiming God's praises.  What must it be like to gaze in awe on the beauty of God Himself?  Surely only eternity will tell.  But what John hears the heavenly host proclaim over and over again is the word 'Holy, Holy, Holy'.  This aspect of God's character fills the host with awe and they give sacrifices of praise to the Lord of Hosts!

Its no wonder that God says 'be holy for I am holy.'  No wonder because of His character.  But a great wonder to consider that we can be included in this.  Phil took us through the sad early history of our race and showed how Adam and Eve choose to doubt God's goodness and disobey His revealed commands.  Phil feels that covetousness - the last on the list of the 10 commandments given to Moses - may be the root of most sin.  An unholy dissatisfaction with what we have, a jealous grasping desire for something outside of God's provisions, leading us to replace God in our lives and follow our own 'wisdom.'

In the other two days Phil explored the dysfunctional church in Corinth, showing God's concern for them through the apostle Paul.  We could easily see our own fellowships in this harsh but loving light.  Paul urgently desires that the church live up to what it could be - but knows that it cannot change in its own strength - but only through the grace of God revealed through the cross.

Amazingly Paul is able to challenge the Corinthian followers of Christ imitate him - Paul himself.  Could you and I honestly urge that of others?  Are our lives lived out as open books where people can see that we are ordinary people who are following the extra-ordinary, amazing God of Gods?  Paul follows it up with a statement that 'the Kingdom of God is not a matter of words but of power' (1 Cor. 4.20).  What does that say about us?  We are not talking power in the conventional sense of the word.  Power to shut down a city (we saw that recently - and that was based on fear).  Power to make my will subjugate someone else (history is full of that).  But power where we see lives changed.  Radically rebooted to where the reality of a risen Christ is unmistakable.  The Corinthian church had started well, but lost the plot and were bitterly squabbling, while quite proud of how 'spiritual' they were.  Does that sound familiar?

It does - all to sadly we see so much of the Corinthian church in us.  But the good news is that Paul wrote the book to help that particular church - and other Christ followers like our group of house-churches today - to change.

We saw some of this change in the lives of the people who attended the camp.  We were a motley crew - a total mixture with some having followed Christ for years - and others having just made the choice.  We had people who were very senior management execs and auto-rickshaw drivers who by attending the camp were missing 3 days of income.  All slept in the same simple dormitory accommodations in the cavernous halls of the school.  The picture is still far from perfect, but the we are seeing a mosaic made up of lives being transformed to be after God's own heart.  This was especially evident in those who poignantly shared about how their lives are changing as they experience the love and power of Jesus in them.

What else went on in the camp?  Lots of conversations over tea and food.  The kids had a separate programme and this year the young people came a day early for a mini-camp of their own (thanks Aaboo Varghese).   Asha helped out with the worship team - playing her violin.  The kids had a whale of a time with so many others their own age.  It was a joy to see them tearing around with others and by the end of the day when it was time for family prayers they were well and trully bushed.  We tried to fly a German 'tube kite' early one morning but only managed to get it tangled in a tree (we rescued it).  Lots of conversations and prayers with different folks.  Amazingly, the youth from various Marathi speaking Brethren churches were also holding a camp in the same site and they had asked me to speak to them, so one evening I popped up to the hall they were using and spoke on Biblical Sexuality which was well received.  And there was also some down-time too - not much but at least a bit to catch a nap in the afternoons.

Time had it seemed had both stopped and also was running at full speed.  Before we knew it, we were packing up and getting ready to disperse in the 4 buses that we had hired to take the campers back home.

Did you feel the darkness tremble?
When all the saints join in one song
And all the streams flow in one river
To wash away our brokenness

Posted by Andi and Sheba Eicher at 22:00