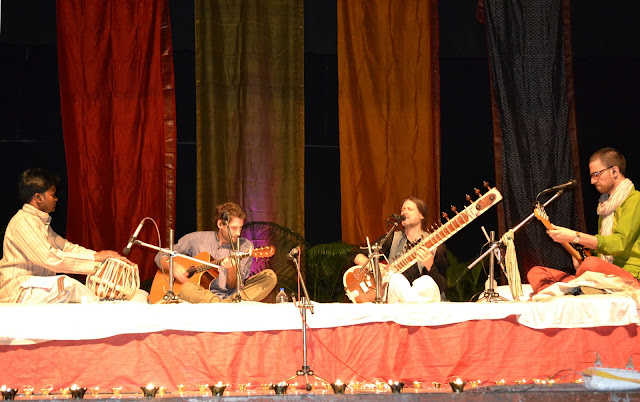 In the total haze that these last weeks have been a blessed evening of music descended.  Being one of the organisers for the Aradhna concert had its own set of 'joys' - but finally November 16 arrived - and there we were - at 6.45 PM with the first strains of music wrapping around us in the auditorium.

And then it rained down.

An aural experience.  A visual treat.  A swirling whirlwind of sound.  All four of them bathed in light and playing their hearts out. 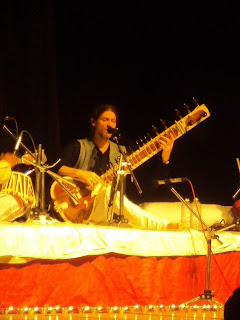 I was enthralled.  The sheer beauty of it almost wanted to make me cry.  (Perhaps the fatigue of organising was also creeping in too).

Aradhna have come a long long way since Chris and Pete played in the Woodstock dining room for Sheba and my Mussoorie wedding reception - way back on Dec. 23rd 1999.

They have spent the last 12 years almost continuously touring - developing their sound - growing a devoted band of fans around the world - continuing their quests for beauty and devotion - and taking various loops and turns as the walk the steps behind their blessed Yeshu Raja.

Over the years I had received the albums - and we had Chris do a mini satsang concert half a decade ago.

But this was so totally different.  A colossal wall of sound.  Beauty layered on so heavily you could almost cut it.  An experience of awe at the weaving in and out of their voices and instruments.  An ethereal experience.  One that made me want to pinch myself and ask if it was really happening.

But it was.  And ultimately oh-so-short.

Chris was cueing us that we were nearing the end of the concert. 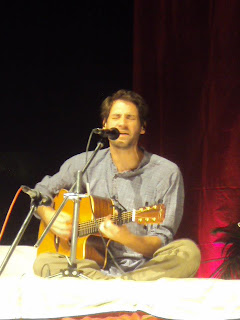 Pete told us about travelling across the country with the then OLIO band and stopping in road-side dhabas and almost immediately having a cluster of truckers and others forming a lusty impromptu chorus as Chris and he went into the bhajans while sitting on charpais as the evening descended.  Just how different this instant community of song was from his own experience growing up in the US.

And then on stage Aradhna launched into Biniti sunele, Yeshu pyare.

Instant heaven.  Yearning for more.  But the show had to end.

And end it did with lots of smiles.  Many of them tired.  The band has been on a break-neck India tour.  Our show was the second-last night.  They left early this morning for Bangalore.

A lot of us were tired too.

Tired since nothing stops in Mumbai town.  And organising a concert for a 1400 seater venue is quite the challenge.

Tired because all week rumours swirled that Bal Thackeray had died.  And that everything would shut down.  Wondering if this would include our beloved concert. 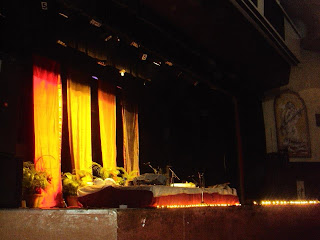 Instead, his death was announced late this afternoon - a day after Aradhna had brought their beauty to our city.  But sadly the attendance was sparser than we hoped for - we think largely because of the fears that people had of getting stranded should the death be announced and Mumbai shut shop (which it promptly did today when the news came out).

Tired because on the morning of the event our decorator said that he would not be providing the set that he had promised.  And so out of nowhere we had to come up with something.  Philip B had shared in the morning prayers about being calm in the middle of the storm - and allowing our trust to be in Jesus.  That was put into action over the course of the day - and in the end we had a stage that was simply beautiful.  And adorned with 4 sarees from the love of my life.

Given the vortex of things to try and do before and after the show - the actual concert was the only still part of the day.

I could see so many familiar faces in the crowd.  People who came support the cause - we were running the Aradhna event as a benefit for Freedom Firm.  Our volunteers with their bright yellow shirts.   Out of the corner of my eye the figure of David Trivbhuvan - the man whose enthusiasm and big heart had challenged us to have the concert at Kalidas hall!  Sadly there was just the very minimum time to meet and greet - with the concert over we were rushing to get Aradhna back to their accommodation (2 in our place and 3 with Dr. Alfred).  It was a short night and the band left our place for the airport at 4.30 AM this morning.

Its been an epic event.

Made bitter-sweet by the announcement Aradhna gave last month that they will stop touring at the end of 2012 like they have been for the past 12 years.  This may be the last tour.  Period.  Pete and Fiona have 2 amazing little girls.  Travis Mcafee - who I met for the first time - has 4 kids.  Chris and Miranda have each other.  The band has been touring 100 days a year.  Mostly weekends.  Its time to shift gears.

For this tour Aradhna were also joined by the gifted Udhay Kumar on tabla and my old pal Mike Williams as the sound engineer.  Mike was part of the fabled OLIO tour of Manipur when I was working with Shalom in Churachandpur.

Having these amazing friends 'close up' was a little bit of heaven.  "When will we meet next?" always surfaces after another short and sharp encounter takes place.

It will take some time to digest the past 24 hours. 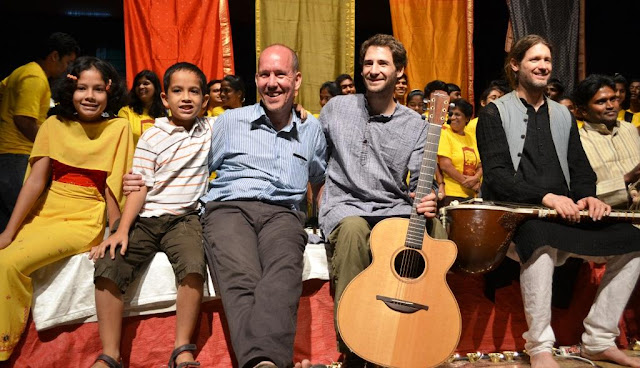 In the meantime I prefer to slip back to that magical 1.5 hours at Kalidas hall - the stage aglow with soft light and the immense sound of four musicians pouring themselves into worship washing over me.