What is your favourite ‘bad dream?’   The one that keeps showing up when your mind is spinning from the day of work?  When sleep is not a rest but a strength-sapping night of mumbling through things?

For Sheba her dreams have her in an exam hall.  And she has forgotten her hall ticket.  And the other students are starting to write their papers.   Panic.

For me it is that I am at an airport and have forgotten my passport at home. Or that I have not renewed my passport (that part is true).  Or that the train just left.  Kick-in-the-stomache-sick-feeling.

This afternoon I had a dream come true.  And it was not a pleasant feeling.

As I was approaching the station I was scared.  I had been coaxing the auto-rickshaw-driver to go faster and faster.  The good natured soul responded well and coaxed his sputtering green-and-yellow bumble-bee of a vehicle to go a little faster.

We finally came to the comforting dome of Humayun’s tomb and having done our respects with a half-turn we sputtered toward the station.  There In the confusion of humanity I gasped to a coolie ‘which platform is the rajdhani on?’

I groaned as he said platform 6.  On the other side.  I grabbed my 3 bags (up from 1 when I came to Delhi 48 hours before) and ran up the stairs – brushing aside the coolies offer to help (for a price of course).

This is *not* happening to me I said – but was glad that I was in the station.  But what time did the train really leave?  My ticket was blank – since the train had been booked 2.5 months earlier and the ‘new timetable’ had not been announced then.  I had checked the internet yesterday and it had said 16.50.  Somehow 16.40 got hard wired into my mind.

And then I saw what I worst feared.

The grey coaches of the Rajdhani leaving the platform.

Slowly snaking their way away through a crowd of people.  The train was half-way down the platform – and

I was still on the overbridge.

Help! Stop I shouted as I ran down to try and catch it.  I ran along the platform, and saw the last coach leisurely leave the end of the station.

I asked people around whether that was the Rajdhani.  People looked like I had just landed from mars.

I starting to run with the idea of running along side and jumping on somehow.  I couldn’t let it leave without me.  I was stuck in Delhi.

My dream was bitter reality.

One small hope.  That is was not the train.

I looked up and saw a Rajdhani clatter by – at full speed.

It was the New Delhi Rajdhani that leaves at a similar time.

And then the blessed, blessed sight.

On the other platform was a train.  It didn’t look like the grand sleek coaches of the Rajdhani, but I had to see.

Like Thomson and Thomson checking out another ‘mirage’ in the desert I walked up to this train and looked at what was written on the last coach.  “August Kranti Rajdhani”

Relief splashed into my weak heart and sweaty self like rain lashing a parched land.

I had still to find my bogie, but now I was within striking distance of the thing I thought I had lost.  I was a hop on board away from my trip back home to Thane – and was not sitting on a hot Delhi railway platform with a sick feeling in my stomach and my berth whisking off towards Mumbai!

As I came close to my berth the familiar tall form of Philip B was waiting for me.  “I was getting worried” he said.  I could hardly speak for relief.

Phil had come to spend a few minutes with me before I was off to Mumbai-town.  He became my father-confessor as I spouted out my confession of relief.  My sweaty and trembling self actually reaching out and touching the blessed coach B-7 where my berth awaited me.

And now as I type these words – it all seems a dream.  I just carry the sheer terror of a memory, a slight pain in my chest, and a film of dry sweat along with me – as our tube-lit coolbox speeds imperiously through the dim, largely empty countryside – with the strains of a carnatiac violin piped through the speakers.

Am I ever happy that I am speeding back to my family in Thane – to the work at JSK – and that I am not trying to get onto another train in hot and sweaty Delhi.

This was a bad dream that came true – but the truth was such a blessed relief – that I am still not sure that I am not dreaming.

Speed on!  And take me home! 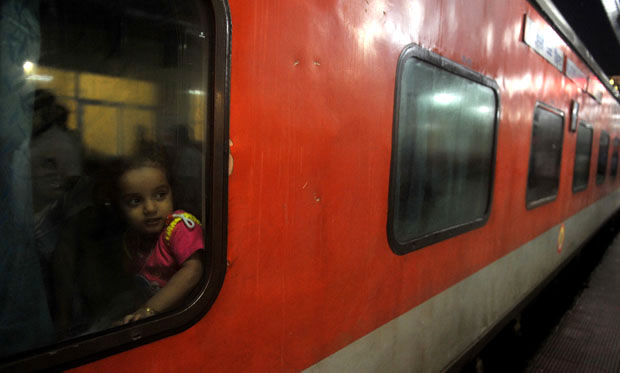 photo from: http://photographyblog.dallasnews.com/2012/07/around-the-world-in-photos-best-of-the-week-2.html/
Posted by Andi and Sheba Eicher at 12:08