The process of discovery is not always easy.

This week we found out that our grandmother committed suicide.

Till now no traces were found.

Dad had tried to contact the Sowman part of the family.  A lady was helpful and helped Dad find a marriage certificate, a birth certificate and some other information, but then the trail grew cold.

After Dad got in touch with Jack, we managed to source an engagement announcement about Betty from the Times of India in 1945.  But for some reason this marriage does not seem to have happened.  Another dead end.

Then last week Jack sent us the bomb-shell.

He said that for many years he had the name 'Walker' on his mind.  A check of shipping records finds on Henry Walker who along with B.I.D. Walker left India for Britain.  Henry Walker is recorded as being a Naval Officer.

They then found out that a Betty Walker died in Birmingham in 1961.

Jack applied for a death certificate and got this: 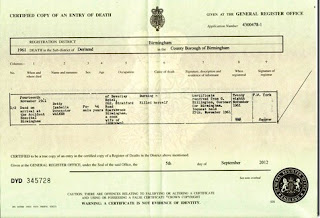 The cause: burning.  Underneath is typed out ‘killed herself’

The image I have is blurred, but it seems to say she was a cook.  The address is of a hotel.  She is listed as wife of (unknown).

I feel immensely sad for Betty.  In 1961 Dad was at college in the US.  He was blossoming as a young man – questing forward with the spiritual discoveries and passion that would define the rest of his life.   At the same time his mother’s life spiralled to an end.  Suicide is one of those things that will always defy a full understanding.  No simple words can express the horrible complexities of someone ending their life. But here we have typed out on a document black-on-white words which certifies that this is how Betty died.

I was talking to Stefan this evening on the phone about Betty's death and he said something important.  He said that till know we are just talking about ‘my Father’s biological mother.’  True enough.  Nothing false here.  But also a very abstract and remote way of talking about Betty.  She is our grandmother and though we know so little about her – I realise that I have been shielding myself – cutting myself off from any emotional involvement – building a little psychic wall of isolation.

Grandma Betty was born on 26th October 1915.  She died on 14th November 1961.  She was a tragically young 46 at the time.   Only 3 years older than I am know.  My beautiful grandmother lived what seems to have been a short life with a great deal of sadness entwined in it. 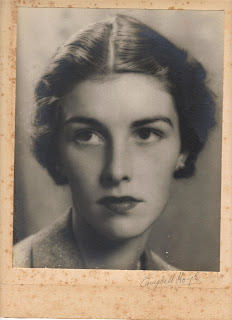 My heart goes out to Dad and Jack as they process this death.  In one way is the end of their search for their mother.  They have found her.  To an extent at least.  The very slim off-chance that she might still be alive – or slightly greater hope that we might still find some happy siblings who would tell us about how Betty lived a life of joy  - seems to have died as well.

For her sons, and for us grandchildren, the task now is to grieve and grow.  We will never I suppose get to know the details of Betty's life.  However chaotic her life was, we know that it did have some purpose.  For just sheer existence alone I am so grateful that my grandmother Betty chose to carry my Father to term instead of having him aborted.  Look at this 1974 photo of our family - taken when Dad was 33 years old.  Comparing it with his mother's photo above, I can chart out the geography of kinship: the nose that she gave him, the way her eyes remind me of how Dad looks. 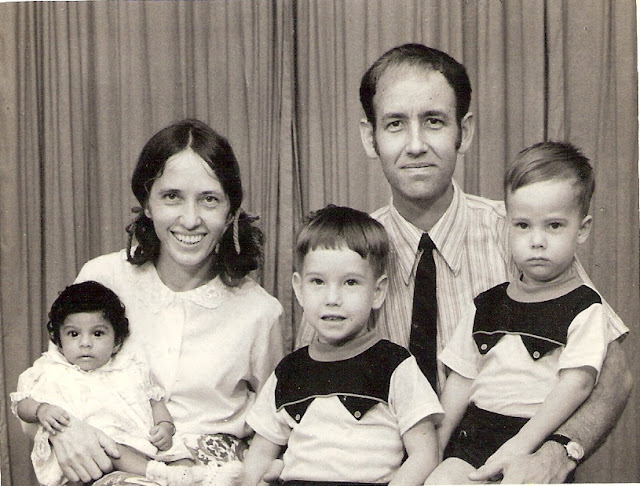 The terrible thing about a suicide is it always leads to the 'what if' questions.  For which there are just no simple answers.   But I think it is important to acknowledge the sorrow.  I feel so very sad that Betty did not seem to have someone whom she could trust – who could help her out of whatever despair she went through in 1961.   The statement on her death certificate that states 'married to Unknown' seems to sum up the little we know of what she lived through.

Looking at the truth it not easy.  We like to bend our thoughts in other directions, distract ourselves from things that are hard to deal with.

My grandmother Betty has in the last few months changed from being a single photograph on the wall - holding Dad when he was 2 days old - to become a real person.  I am in the process of replacing the 2 dimensional icon in my heart of 'my father's biological mother' with what are still admittedly slender strands of a history.  Or better put - her story.  Betty is slowly growing in my mind to be a real person who lived a complicated life and who is intimately tied to who I am across the miles and years.

And so I say a small prayer.  Not the traditional 'Rest In Peace' which many in Christendom have used.  But more a prayer for healing in my Father and Uncle Jack's hearts - as they come to grips with the death of their mother.  And a prayer for the many lonely and confused who are contemplating 'ending it all.'  I can no longer remain a passive bystander since the story of Betty is now irrevocably wrapped up with our stories.

Her death is a reality.  An end.  And also a new beginning for all of us.

Posted by Andi and Sheba Eicher at 00:34