We sent a man for surgery at one of the main goverment hospitals. He was HIV positive and had a blood clot - and needed emergency surgery.

Our staff went to check up the next day to see how it went.

The man - we will call him Michael - was not operated on.

Not because of his HIV status. That we have experienced before.

But this time it was because the municipal workers were on strike. And since the hospital is staff largely by the municipality... no work was done. The reason for the strike? Wages.

Only a week earlier, there had been another strike. This was by the interns - medical students who had finished their studies and were now on their 1 year internship. The reason for the strike? Violence against doctors. That week a mob of people had barged in after a sudden death of a patient - and began smashing up the hospital and beating the doctor who had handled the case.

And this does not only happen in government hospitals.

Last week a mob beat up all the doctors and a number of senior nurses at the Mission Hospital in Chhatarpur. A lady had been admitted and then passed away suddenly. The relatives and others let mayhem loose. The hospital shut down for a day and senior administrators rushed in from Delhi to meet with the police and others.

And the story goes on. Adversarial relationships in health care. What used to be a sacred trust is hardly that at all.

My mind goes back to a mob that smashed some glass in the hospital where I was working in Jharkhand. A doctor friend of ours was just behind the glass and miraculously did not get hurt from all the splinters. It is not surprising that she does not practice in a mission hospital in the North anymore. While this incident is not the only reason - it did leave a very sour taste - esp. when 'relatives' of the deceased filed a case in the consumer courts that dragged on for years. And was especially nasty since the mother was illiterate - and whoever was behind the case was clearly hoping for some kind of an under the table pay off by the 'rich doctors' who had come to work in their area.

What is taking place in medicine is a sad microcosm of what is taking place across our land. We have an electoral process - but too many groups resort to muscle power. An exhibition of holy books that doesn't meet your standards? Barge in and smash. An alleged insult to a particular community in a film? Rip down posters and burn. Not enough jobs in the police for a certain tribe? Block roads and burn trucks. An artist who has insulted a particular group? Break up his exhibitions wherever they are and force him to go to the gulf for his dear life. The list goes on and on.

I think that besides a genuine hunger to be rid of the all-pervasive corruption that helped propel last month's Anna-Hazare-led popular movement onto all - there is also another angle. I think the desire to see something happen without violence - tapped into the heart of a new generation.

Yes - a lot of it was far more premeditated than it looked - esp. the flags waving about and the TV teams swooping in to interview and record 'people's anger' etc.

But for a brief moment there was something that people felt they could belong to. A reason to go out and demand something. A cause to be proud of. 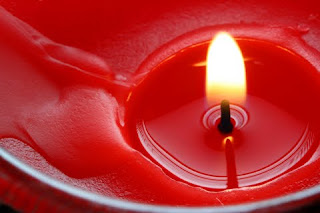 The candles may be cliched. The slogans and the white 'Anna Topis' (the traditional Maharashtran hat that no-one other than elderly villagers wear these days) with their snappy slogans 'I am Anna' - already seem sepia-toned (until the next fast fof course - but how many can the good man do?).

But here is the rub - how much better all of that than what is now the norm - bullies who barge in to beat up. 'Political Activists' who force people to shut down shops and stay off the roads for some vague demand or other. 'Guardians of morality' whose own actions speak of gross cruelty. And whose 'services' can be purchased by the highest bidder too...

May a thousand candles burn. Always better than the tyranny of the few in the name of the many.

And that goes for the Anna-brigade too!
Posted by Andi and Sheba Eicher at 16:26