The great lumbering twin challenges of finding an effective cure for HIV infection and a stable efficient vaccine continue to lurch forward.

Every now and then we have sparks of hope. Last year the proof of cure for HIV infection was shown in the now famous 'Berlin Patient.' The actual treatment he went through (bone marrow grafting for leukeamia which an additional bonus of using stem cells from a donor who had an HIV-inhibiting mutation) almost killed the patient. He underwent the treatment because he was dying of Leukaemia. Ridding his body of HIV was a big bonus. This particular treatment is unlikely to be replicated much. But it shows that cure is possible. A 'proof-of-concept.' 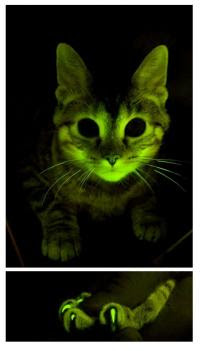 Vaccine development has been much slower. Every now and then an announcement is made - only for hopes to dim again. Researchers have just not been able to get effective inhibiting agents introduced into human cells.

Recent research on preventing the Feline Immuno-defiency Virus - and HIV like virus found in cats - shows some promise. The idea is to introduce an inhibiting factor found in monkeys to cat egg cells - and see if they were resistant to future infections from FIV.

It seems to have worked. The monkey gene prevented the cats from being infected. And their progeny too.

And the glow-in-the-dark bit? That is a marker (from a jelly fish) added to help researchers know that the gene was actually transmitted.

This is not even close to being a vaccine - but offers hope as a model that is closer to humans. One where the dynamics of protective strategies can be worked out more effectively.

We know that the twin goals of cure and vaccination are possible. There is still a pretty long road ahead. But we are hopeful.

I remember being in a seminar room in New Haven in 1995 when the news came about a 'revolutionary' 3 drug treatment study in treating HIV. We were stunned by the good news of very positive outcomes - compared to the then common single-drug regime where patients quickly developed resistance to the drugs.

Today these drugs are mass produced in India and free for people with HIV. Our challenge now is to help people be stable and take the meds. We have a young man who just does not want to take the medications. He has seen his father die of the disease and prefers to cope with his own infection by denying that he needs medicines.

Whatever scientific advances are made - the actual implementation of any improvement takes place one life at a time. We are privileged to be part of that process. We look to the future and live in the here-and-now, knowing that every day is precious, every life is valuable, every action has meaning.
Posted by Andi and Sheba Eicher at 10:46