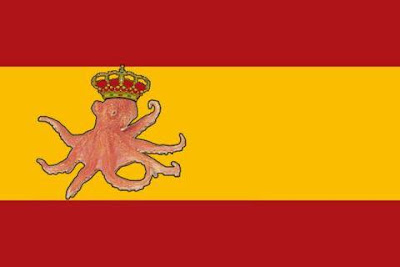 Here is one thing that no one could have predicted about the World Cup Football Championships in South Africa: the world wide fame of an English-born, Germany-dwelling cephalopod named Paul. A google search of 'octopus' and 'paul' done 35 seconds ago revealed 9,520,000 hits. That's a lot. Especially for a mollusc.

The final 'predictions' that Paul made were pure showbiz - covered breathlessly by more reporters than Wayne Rooney (who is he?) could have dreamed about. Paul the octopus 'predicts' the country that will win an upcoming football game, based on which flag-adorned-plastic-bin he first opens to eat a morsel of fellow mollusk. His run of choosing the 'right' flag has coincided with all the Germany-related games of this world cup - as well as the final match between Spain and Holland.

Before that match we also decided to choose who will win. The 10 humans in the room chose which country they thought would win and wrote down the scores (ranging from 0-0 in extra overtime to 3-2 during regulation time). We also gave a black dog who was in the room with us the choice of a yellow (Holland) or red (Spain) coloured doggie treat. The humans were split down the middle. 5 for Spain. 5 for Holland. This was based mainly on who we wanted to win. The dog ate both treats. But 'Pepper' (the hound's name) ate the red treat first. 50% accuracy for the humans. 100% accuracy for the dog. Except that the doggie sample had an n of 1. Had we had 10 doggies who all chose red before yellow I would be more convinced.

A certain parrot called Mani from Malaysia - who makes its living as an astrologer's assistant 'correctly chose' the quarter-finals and semi-finals outcomes. But in the final it chose Holland. Google count: 146,000. Nothing helps fame like success. Failures don't get much press.

What makes us so hungry to know the future? 'Tis nothing new. The term 'oracle' (derived from the Latin 'to speak') goes back at least to the Greeks where the consulting of seers to find out what will happen was common. Probably the most prominent of these were the oracles made by the pythia - a high-priestess in the city of Delphi. People came from far and near to inquire and were given answers. Almost every culture echoes this desire for knowledge about the future. Most have formal and informal means which people use to try and find out what will happen for them.

"Religion is the opiate of the masses" opined a certain London-dwelling German who went on to lend his name to a religious belief system called scientific-materialism (a.k.a. Marxism). Far from being a death sigh - spirituality - of which a desire to know the future and a belief that future events are knowable - is very much bound into the very fibre of what it means to be a human. That much of what is called spirituality is rank superstition and the crudest forms of occult is no surprise. That 'despite' high levels of technology and 'progress' people should desire deeper meaning in life than a bank account and a bungalow should surely not raise any eyebrows. Finally, that a country that like Germany which is so largely irreligious and post-Christendom, for such a country to be a hot-bed of all forms alternative spirituality and occult will surprise us only if we are closet materialists (which a lot of us seem to be).

The reality is that we are deeply and fundamentally hungry for worship. If our desire for worship is denied or belittled - such as it is seems to be many post-Christian western societies - then we will search it out in birth-stones and water-drawn-at-certain-phases-of-the-moon and other increasingly outlandish dabblings in occult realms. It is no surprise that the "Orakle Tintenfisch" is housed in Deutschland. Paul the Squid's popularity is only a small reflection of a spiritual hunger tied up in the heart of man.
Posted by Andi and Sheba Eicher at 12:42