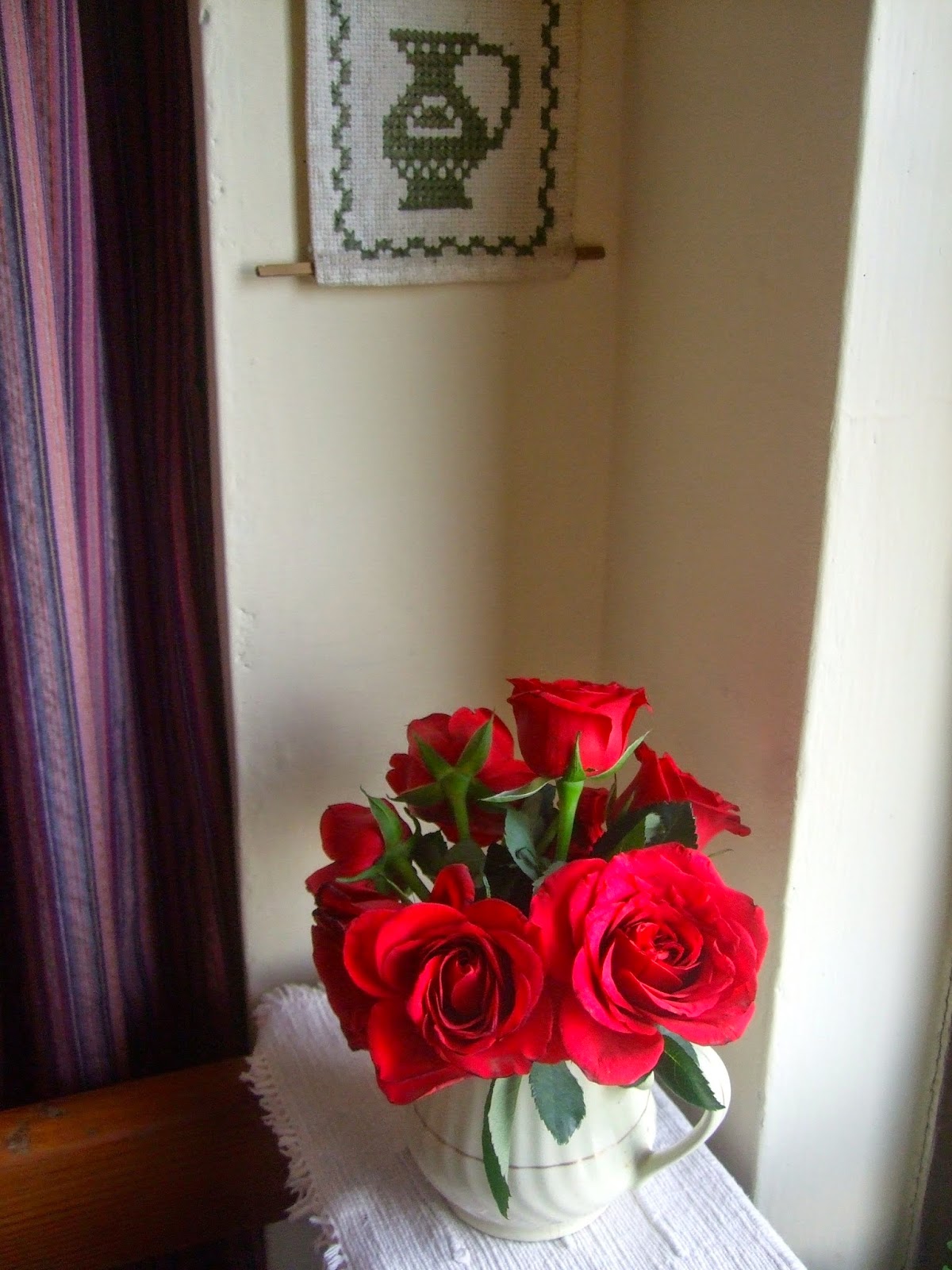 I never thought I would write a sentence like that, but here it is in black and white.  Dad had his first full dose of chemotherapy - Dr. Ashish Bakshi - our oncologist suggested using a molecule called gemcitabine - and so Mum and Dad arrived in Thane at 3 AM yesterday, and Dad was admitted at Bethany hospital (surprise, surprise - on the 5th floor again!) at 10 am to have his chemo-port installed.

Where was Dad and Mum?  Well - as you know if you have been following this blog, our dear parents had a small vacation from the heat up in the cool of Mussoorie.  They kept a low profile and they kept their sweaters on! 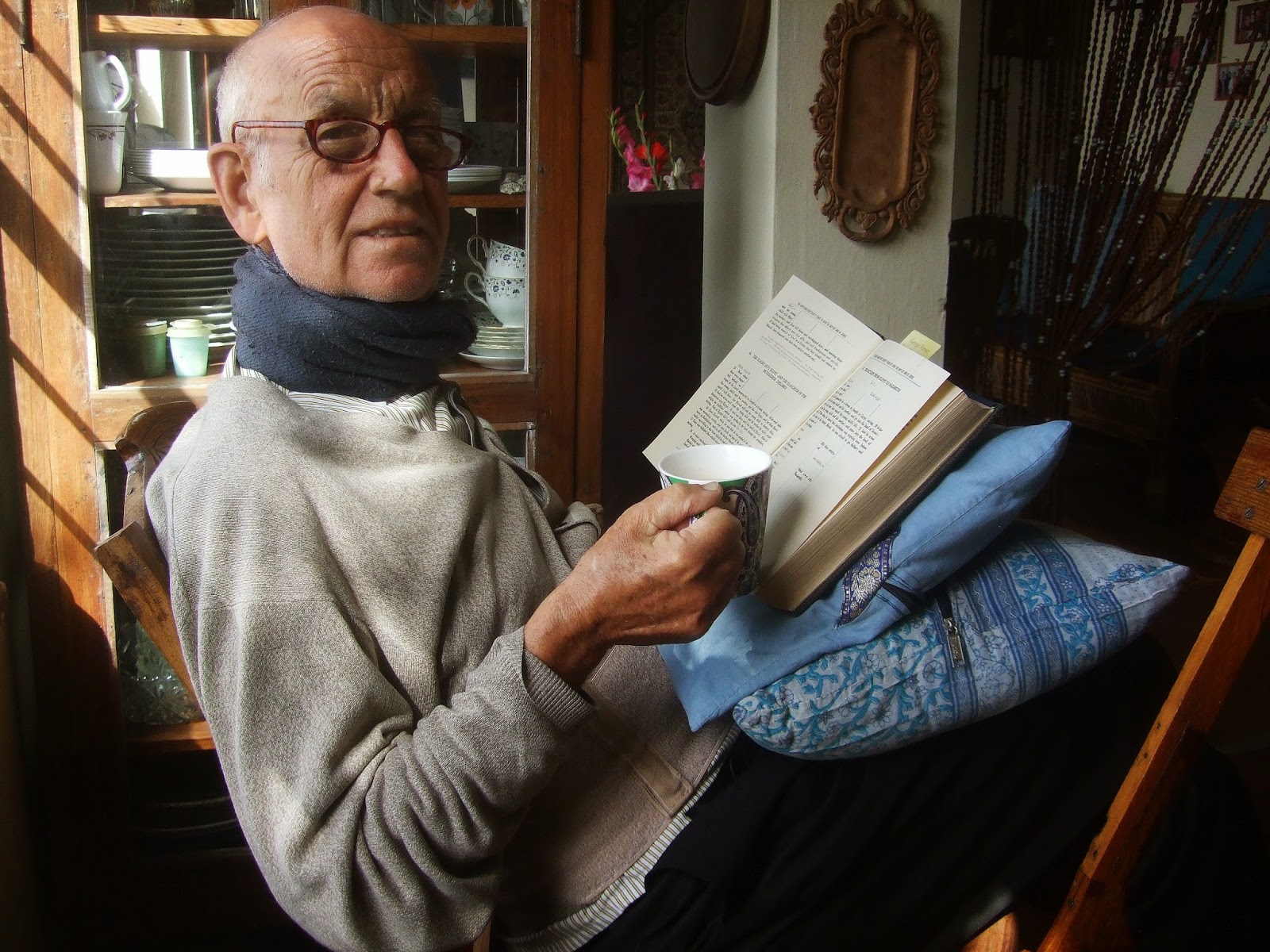 It was a glorious week of quiet, rest, prayer, soaking in the beauty of their home - before they came back to Thane for what may be 6 months of chemo.  We were especially grateful that they could have this excursion since when Mum and Dad left Mussoorie for Dad's emergency cancer surgery here, they had only had 2 hours to pack up and leave.

So we were so glad that they could spend sometime together (and so grateful that so many of you gentle readers who 'knew' that Mum and Dad were in Mussoorie chose to give them their blessed quietness and togetherness for this short season). 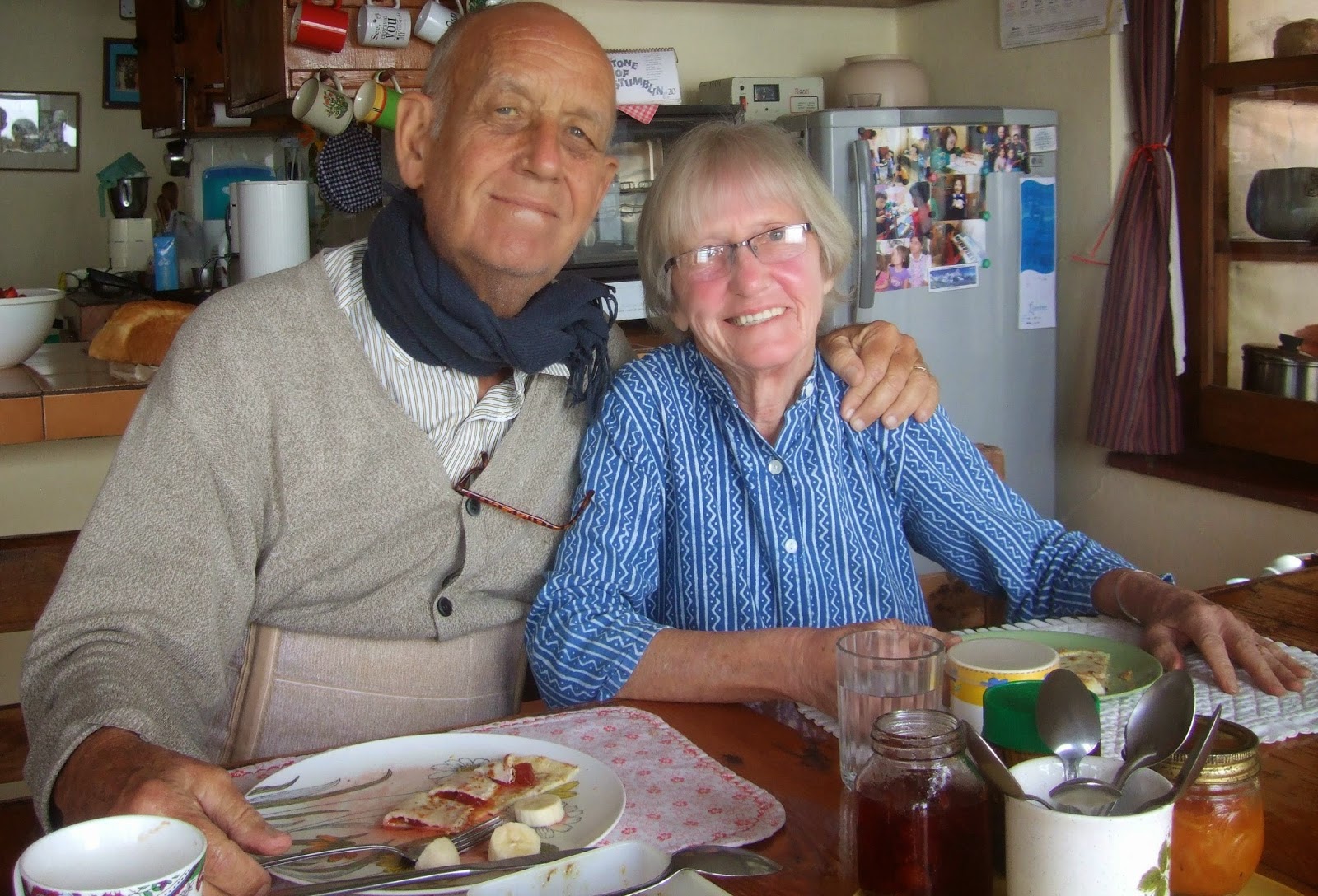 Besides having pancake breakfasts, our lovely parents also made the best of the glorious sunshine that poured down from the heavens.  You can't beat a view of Dehra Dun from the terrace on a cool crisp morning can you? 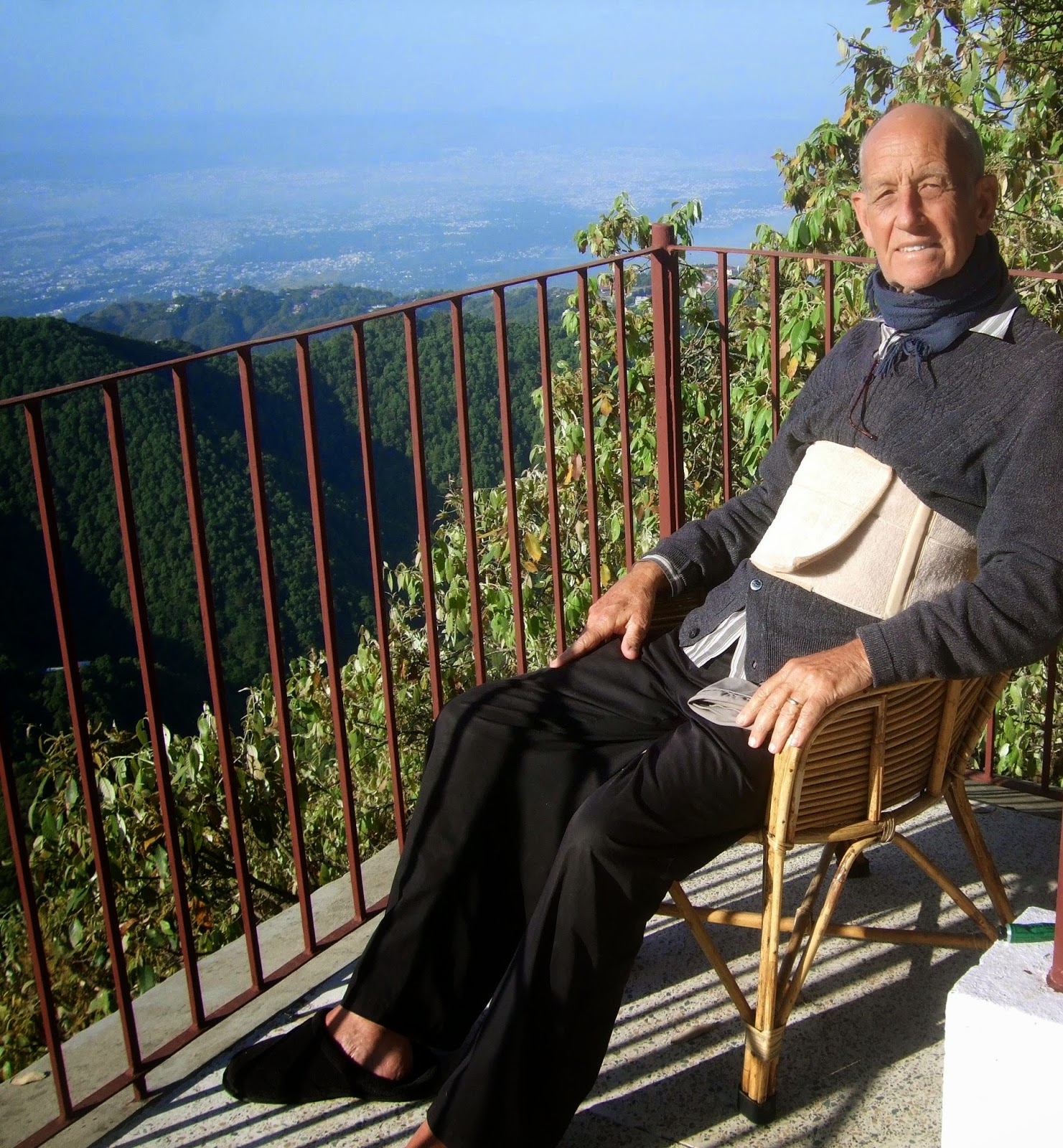 And Mum had her flowers too.  I have just downloaded about 60 pictures of flowers (and precious few of Mum and Dad) - maybe we will have a blog post on Mum's flowers one of these days - but here is a shot of her in the roof-top 'tea garden.' 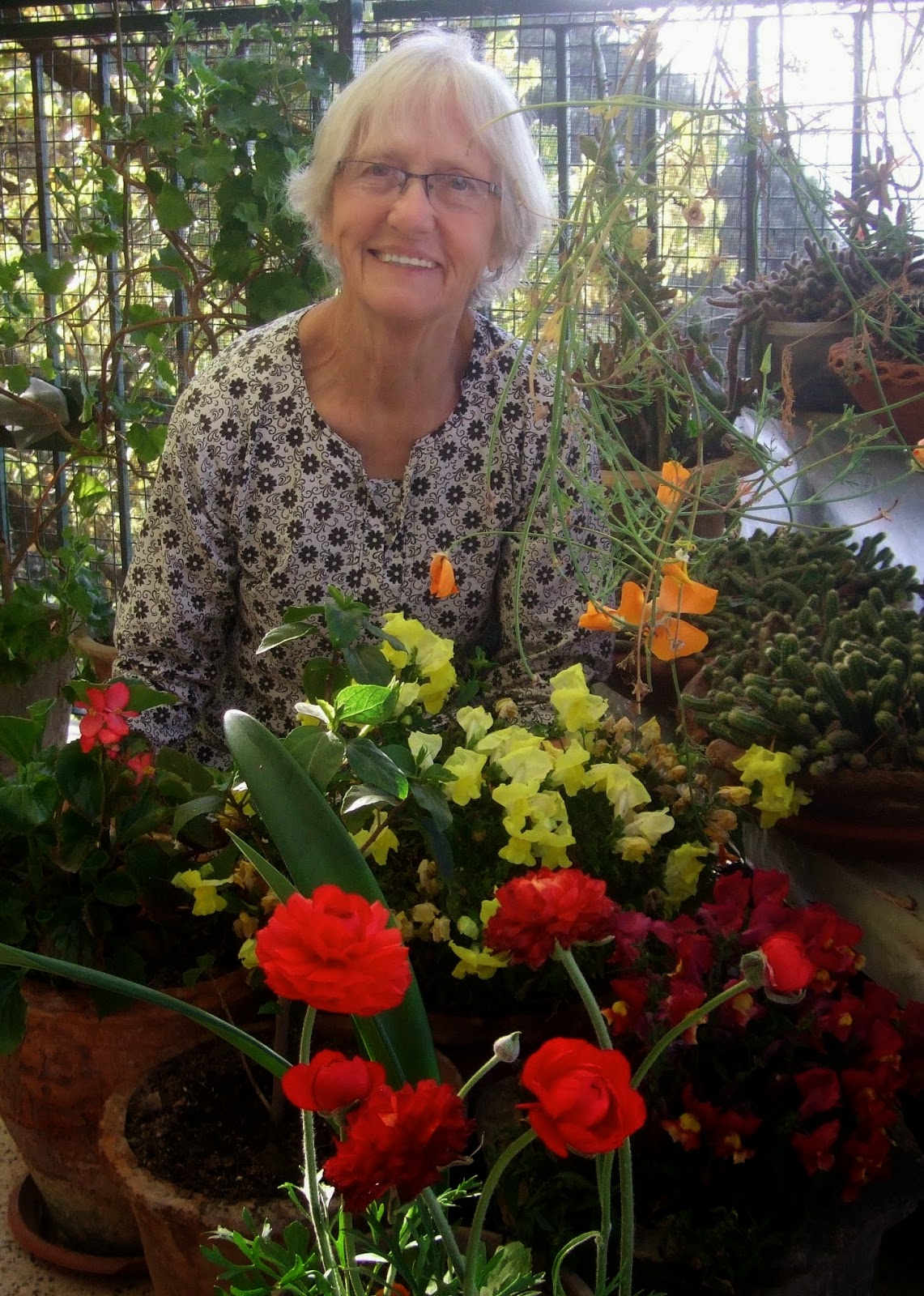 And so while Sheba and the kids were here and Thane, and I was exploring the countryside around Varanasi, Dad was soaking in this scene from the top of Shanti Kunj: 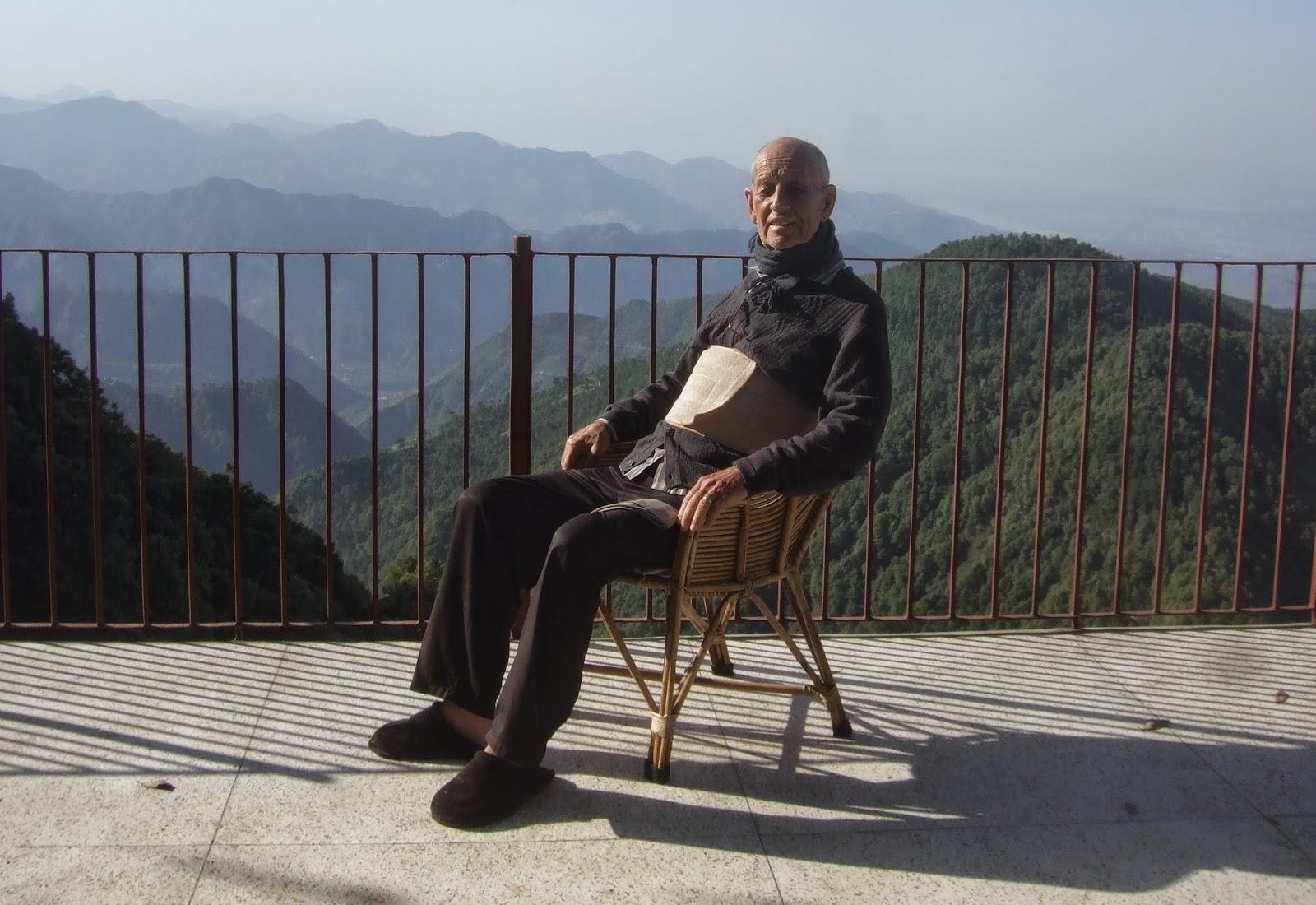 But the week soon ran away and on Monday afternoon Mum and Dad were at the quaintly called 'Jolly Grant' airport in Dehra Dun waiting for their 3 PM flight for Delhi and then on to Mumbai.  Only their flight did not leave at 3 PM - it got delayed till well past 6 and so they were put on a night flight to Mumbai which left at 12 AM and yours truly and Enoch met them at the airport at 2 AM and then whisked them home in our Papaya through the ghostly streets arriving here at 3.

Mum and Dad did not let out a peep of complaint for the ordeal - and were all praise for the fine folks who drove Dad around on a wheel chair in the airports.  The one small problem was that we did not have a certificate saying he was sick.  And so initially so he started to take off his shirt to show the scar and the jujenal tube when the officials quickly agreed that he was indeed in need of a wheel chair. 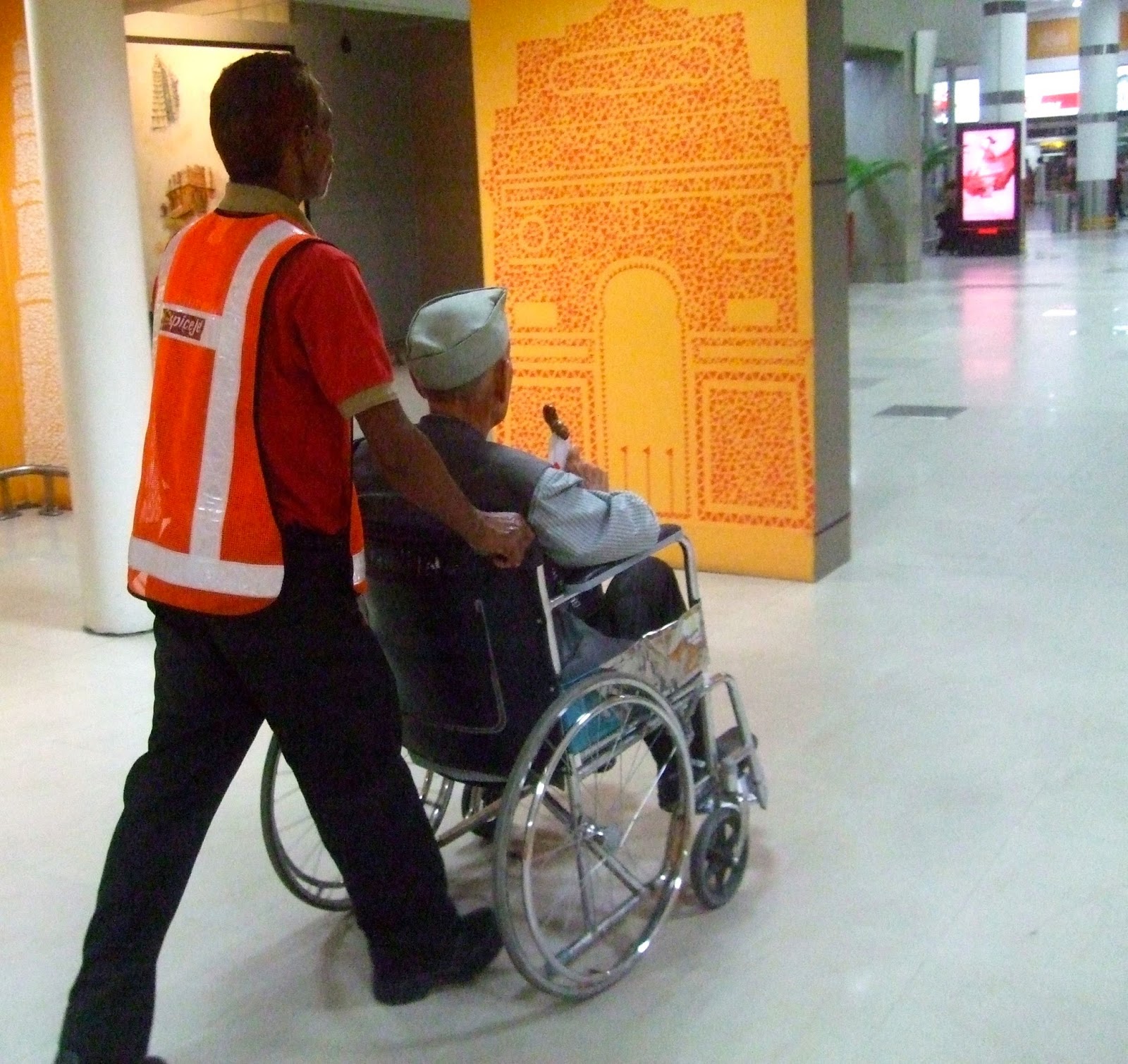 How we wish that Dad and Mum's being with us would be for another reason - but since the biopsy showed that Dad's pancreatic tumour has spread beyond the primary tumour area, we have decided that we would like to try and kill off as much of the cancer that is left as possible using the gemcitabine molecule.  As with all chemotherapy - this is a molecule that is aimed to kill that which is cancerous.  A blessed poison that is aimed at killing as many of Dad's rogue cells as possible, while sparing as many normal cells as it can.  But as with each therapy, there are going to be costs.  We know that Dad's immunity will be dipping very low, so we are in a new era where Dad is not allowed to eat raw vegetables (imagine Dad without his beloved tomatoes at each meal?).

So when we admitted him yesterday morning, we really did not know what to expect.  The operation to insert the chemo-port went well - and Dad and Mum had a good lunch after that! 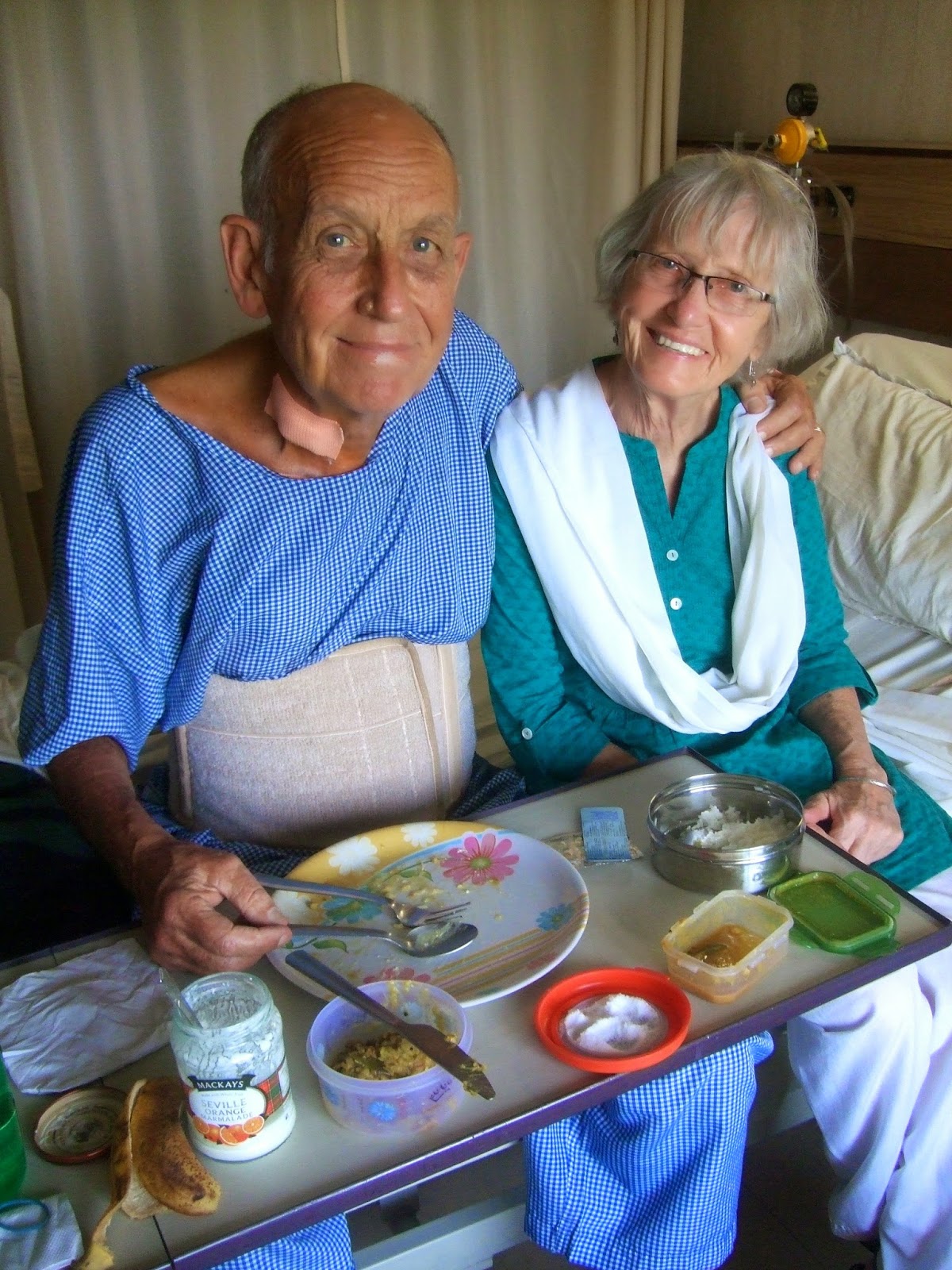 Dad was overjoyed to meet all his old friends - and we had a steady stream of nurses coming in to see 'uncle Ray.'   "How are you uncle?" most of them chimed - to which Dad said with his big smile: 'getting better and better every day!'

And so Dad (and yours truly) had a good sleep in room no. 506 of Bethany Hospital last night.

The actual administration of the molecule did not even take a full hour.  Dad's army of nurses got him prepped and the meds were administered into his chemo-port, which sent the drug through the inner tube into the jugular vein and which goes directly to his heart and then off to the other parts of the body. 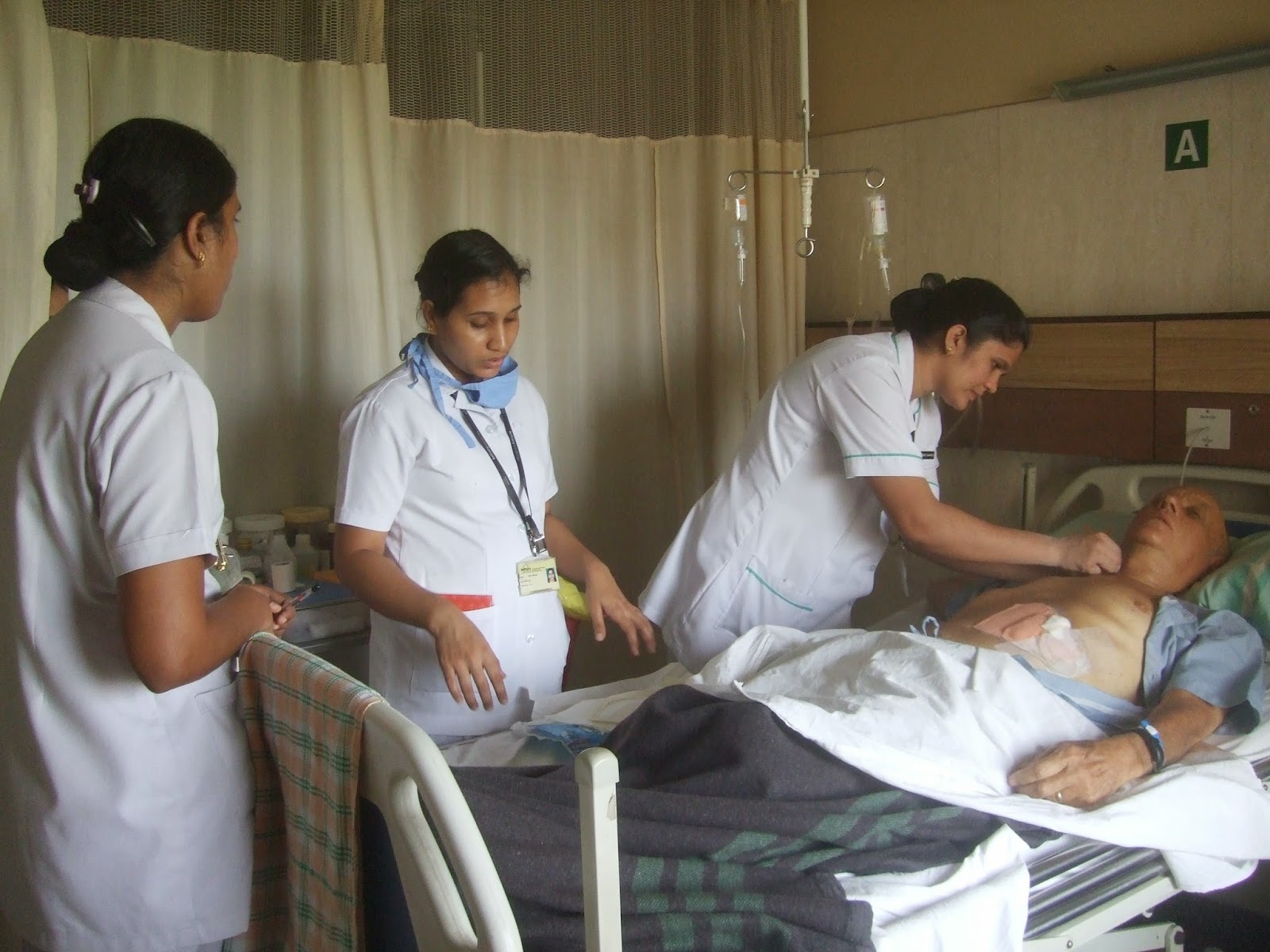 We were so glad (and mindful of many prayers) when Dad called up just before 3 PM to say that he was ready to come home.

I was able to stand up at our JSK Positive Friends meeting during the testimony time and tell about just how good God has been to us during these days of being stretched and having the joy of being able to serve Mum and Dad.

Supper was a joyous but a tad subdued occasion.  Joyous, because we were thrilled that Dad went through his first dose of chemo so well - and was in such high spirits. 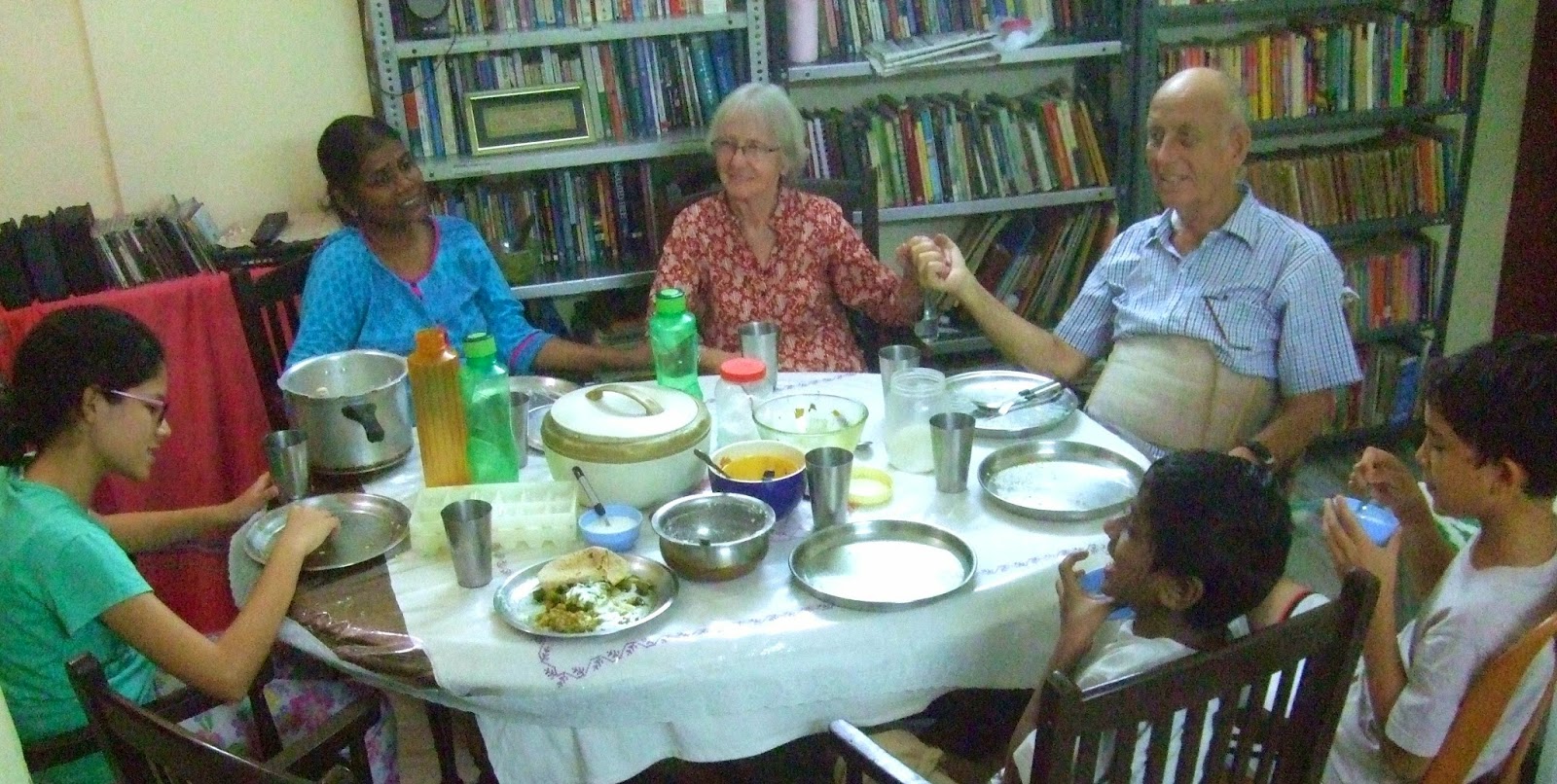 Subdued because Yohand had another epileptic fit just before supper.  It was not easy to see our boy unable to stop the spasms and wonder when the manic electrical impulses from his brain would calm down and give us the Yohan that we normally have again.

It looks like Bethany Hospital will see our shadows again tomorrow as we will now need EEGs and MRIs to look at what is really going on with our son - especially as he is on some anti-epileptic medications already...

One day at a time, sweet Jesus!

We ended the day in prayer.  Some of the ladies from our church came for the regular Wed. evening prayer time from 6-7 PM - and the men came later for a 9.30-10.30 slot.   The women prayed - among other things - for Dad's healing.  The men for Yohan and Dad's healing.  There is much to pray for.  Today's blessed poison will we hope give Dad more life.  The prayers of many are with us - we are so grateful!

Posted by Andi and Sheba Eicher at 00:12