Its 10.05 PM and Sheba has gone over to the JSK centre to do a night call.

We have a little boy there.  We will call him Kim.  Kim is an orphan.  Make that a double orphan - both parents have died of HIV.  He has HIV too.  He is all of 12 years old and has already seen too much pain in his life.

And Kim is very sick.  Sick enough to die.

We have looked after Kim two times already.  The first time he was brought here by his elder cousin sister who was studying at a small Bible college nearby.  It was the night last year when we were celebrating our Annual Thanksgiving time for our HIV Positive Friends.   We nursed him back to health then.

After getting better he was taken 'home' - a small shed owned by his uncle who did not allow Kim to stay in his own house.  His cousin sister continued in the Bible college, but after some time, her repeated requests to leave the campus to look after Kim caused the authorities to ask her to leave.   She brought him back in a sad shape.  Our nurses prayed and cared for this sad little boy.  When he was stable again we reluctantly let him and his cousin sister go.

We offered his cousin sister a job with us.  Stay here and we will look after Kim for some more time.  She did not feel comfortable.  She said she would start working and looking after Kim.  We reluctantly let them go again.

Where are the families for boys with HIV?  These boys need more than just a place to sleep and food to eat.  They need love and care.

Today Kim was brought in.  A skeleton.  His eyes are half shut.  He stopped his meds a month ago.  A total catastrophe.  His cousin sister tried to care for him, but the shed was not fit for her to live in as a young woman.  The harshness of life.  Kim was basically alone again.  A 12 year old boy alone in a shed.

Tonight Sheba has gone over to JSK to see Kim again.  To monitor another shot at getting him back to some form of health.  We have no guarantee it will happen.  We have every chance that we will be taking little Kim's tiny body away in a shroud.

As I write this our dear son Yohan is slumbering.  Enoch is reading a book. We had Anil and Sandhya over for supper - they brought their little son Abishek with them - and another double orphan whose parents died of HIV - but who is not infected himself.  We will call him Brian.   He has been put in a hostel in Nagpur and his here for the holidays - and Anil and Sandhya are looking after him for some time.

The four boys had a wonderful game of playing with duplos while Anil and Sandhya, Mum and Dad and I were joined by bro Jolly to pray with a lady who is in our building who suffers from brain cancer.  After the prayer Anil's family along with Brian trooped off happily.

How we wish that Kim would have folks like Anil and Sandhya to look after him.  Or that he would find a home like Yohan did.  Would that more homes would open for these dear ones.

We haven't tolk Yohan about Kim's latest admission at JSK.  He knows Kim and it will break his heart to see him in this condition.

Please pray for Kim.  We love this dear boy.  Oh the cruelty of this life.... 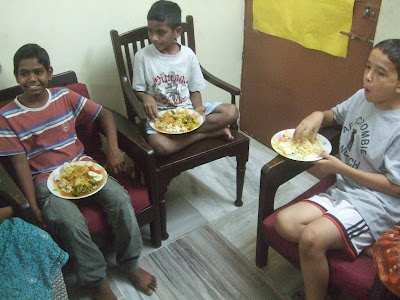 Brian, Yohan and Enoch at supper earlier this evening...  while Kim battles for life at JSK.
Posted by Andi and Sheba Eicher at 22:15