Landour in winter. 7000 feet up in the Himalaya. Recipe for coldness to reign.

But so very often it is 'warmer' in Landour than in Delhi.

The reason is that Delhi winters are smoggy foggy afairs.  When you have cars of this magnitude you are not surprised that days go by without brother sun or sister moon being seen. 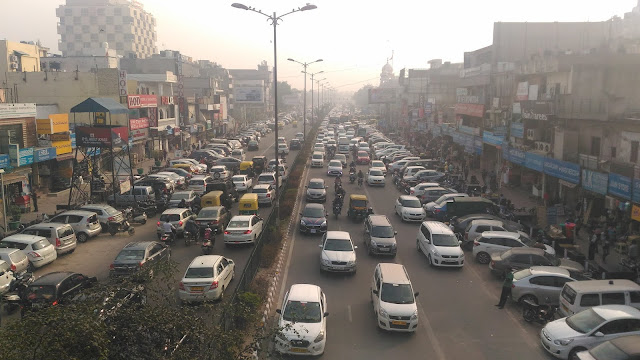 The above picture is at 11 AM - hardly rush-hour by any stretch, and yet enough vehicles to finance a small Gulf state's annual oil selling targets.

And then you add Delhi's cold concrete cake of houses where you would be lucky if any sun hit the street level, you know that you are in for a cold, miserable set of months if you live in our dear capital of a city. 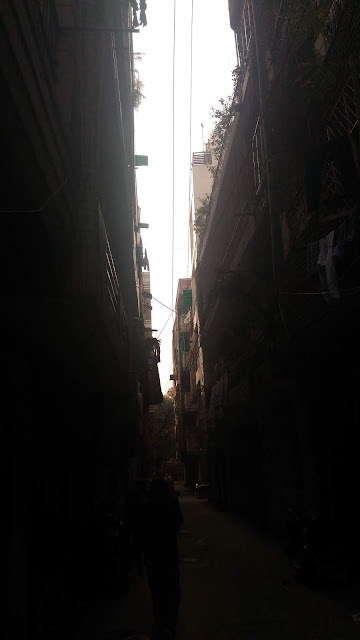 But we still have to make the case that Mussoorie can be warmer in winter.  And make it pretty convincingly, since it seems a large number of folks pack up and head down to the plains when December ticks around...

The key to winter in Mussoorie is where you are on the hill... and how many clouds come in.

If your home is in the shadow of the mountain - on the northern side, or on the top of the ridge, well then you are in for a very cold time.

And then there is the question of clouds.  If there are clouds, you know its going to be cold.  And then if you have clouds which have moisture, and they decide to hit Mussoorie, then you have a winter wonderland.  Like what happened at Landour two weeks ago (picture from Mum's window at Shanti Kunj): 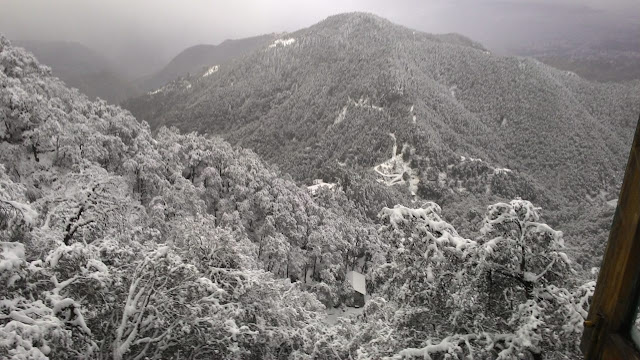 It doesn't snow often in Mussoorie.  Maybe 2 or 3 times a year max.  But when it does, it makes up for the lost time.

You can hardly believe that you are still in India when the snow comes down silently and blanket everything.  Oak trees, pathways, houses, monkeys (well they go somewhere during the snow at least). 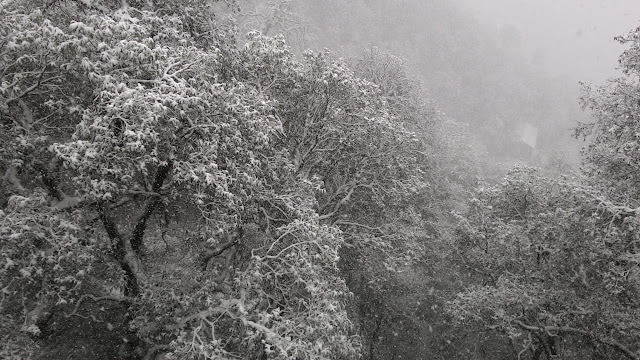 You almost expect to have one of the Pevensies wander by, or maybe haveTumnus the fawn call you to his cave for a cup of tea and a tale of the sorry state Narnia is under - always winter and never Christmas.... 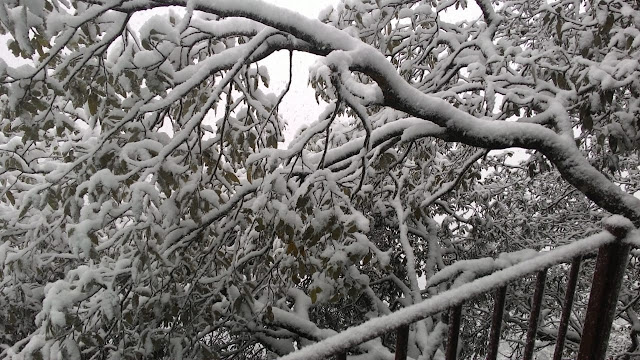 Yes gentle reader.  When it snows in Mussoorie, it is rather cold.  And then you have also the electricity lines going down and so no power for 2-3 days, and when it comes back it is rather intermittent.   Those who have the luxury of being able to stay indoors use their little electric heaters, or if they have, use iron bukharis heated by wood that was stored away many a moon previously. 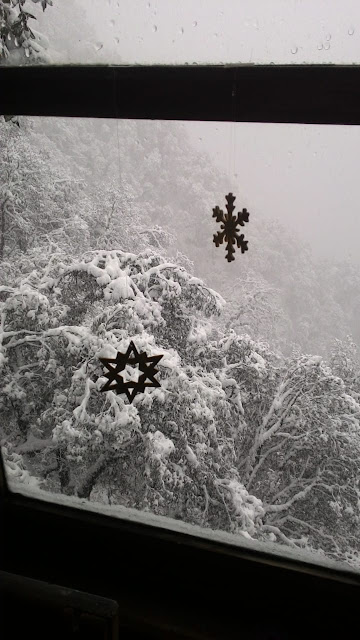 But thankfully, this is India and not the Artic Circle.   We have a fine friend called the sun - and he shows up pretty soon.  A day - maybe two - max three.  Then our dear friend Ravi shows up and does his magic.

The monochrome world takes on the hues of green again. 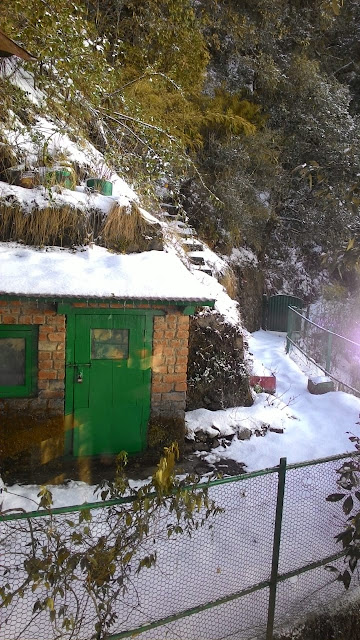 And pretty soon the pristine whiteness which covered the landscape with powdered sugar, is reduced to some slushy bits that linger on for some weeks on the shadow side of the hill.    The snow-tourists have of course rushed up from Dehra Dun and points south (including those chattering away in Delhi who want to throw snow balls).  Usually by the time the tourists are here the sun has melted away the snow.

We weren't able to speak much with Mum over the previous 10 days.  We knew it was snowing in Landour because of the steady stream of pictures Mum sent over whatsapp (of which a few have been shown and the odd email giving updates.  Phones and mobile connections between Landour and Lalitpur are spotty at best - and in the time of our mini-blizzard in Mussoorie are operationally nil.

So yesterday when I was in Delhi, and I read in the paper that more snow is expected next week, I really did not know what to expect.   Especially as Delhi lived up to its reputation of a dismal cold grey city in winter (the bright orange of the Kinu oranges on sale by the roadside being almost the only splashes of colour).  Asha was due in boarding school to start her final board examinations for her 12th class on Wednesday.  Would we be stamping our feet in the snow?

We need not have worried.  As the rusty (and not very trusty) Ambassador taxi trundled up the winding roads to Landour, Asha and I were greeted with this sunburst of a welcome at 8 AM on a sunny winter morning. 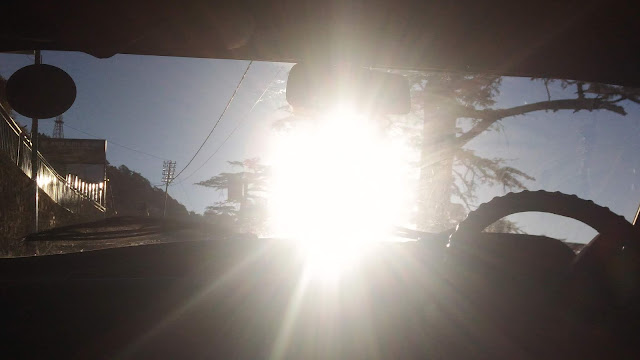 When we arrived at Sisters Bazaar, we stepped out into the crispness and exhilaration of the eternal snows wearing a lovely new layer of whiteness. The twin peaks of the magnificent 'Bandarpunch' stood out in their glory, welcoming us back to Landour arrayed in early morning white.

As we walk down to Shanti Kunj there is narry a drib or drab of snow to be seen (on this sunny-side of the hill of course).  Instead, our eyes are fed with plenty of green, with the sun illuminating the world as if it were just born. 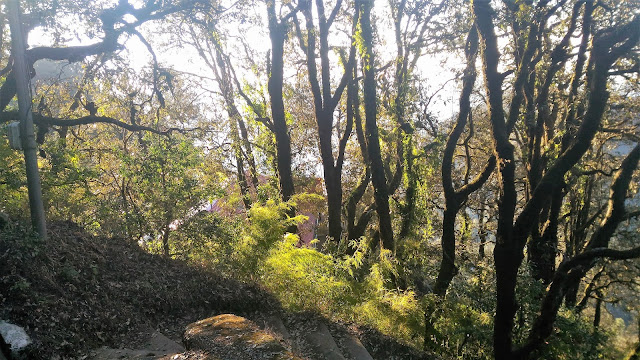 The breakfast table is already basically laid - with food for the body and spirit laid out and waiting for us to finish our hugs and get down to working on our vittles. 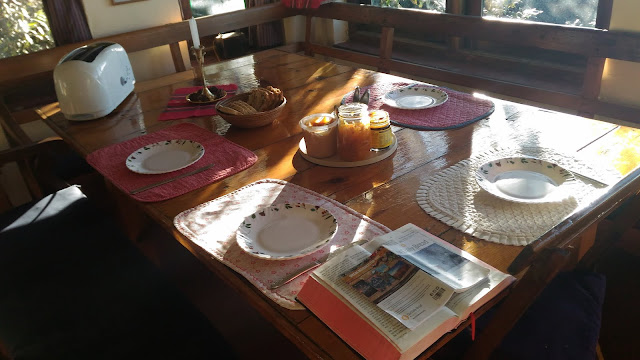 Ahem, did I mention something about this sun?   As this morning wore on, we were blessed with the radiant orb giving us a good dose of vitamin D. 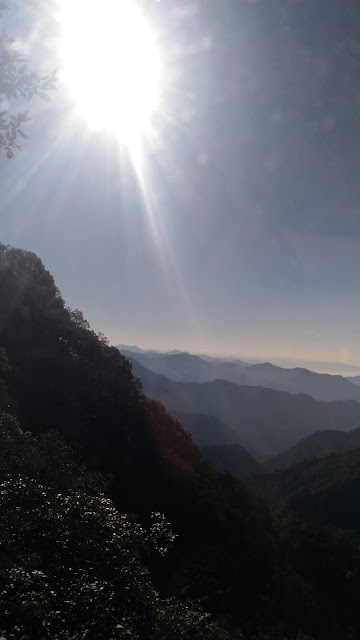 Net result of all this solar brilliance?  So much joy to the soul to see so much beauty all around.  And though we were not walking around in shorts, it certainly was very unwintry.

After the haze of Delhi, to see the unreally cerulean blue of the Mussoorie sky just takes your breath away.  You feel close to space.  The air is thinner and the sky a darker share of blue than we see in the plains. 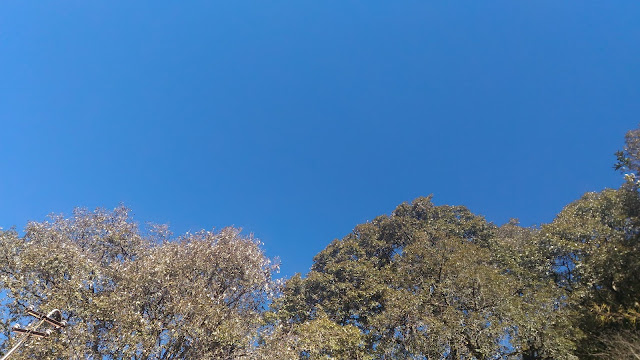 So there we have it.  A few days after everything was white, it almost looks like summer in the hills.

We are of course still bundled up in layers.  This is Mussoorie, and we are still in winter.  But Landour in the cold season clearly has its charms.

After dropping off Asha at her sparkling new dormitory at Wynberg Allen School - it was time to savour the remains of the day. The golden wash of sun from the East is always a treat. 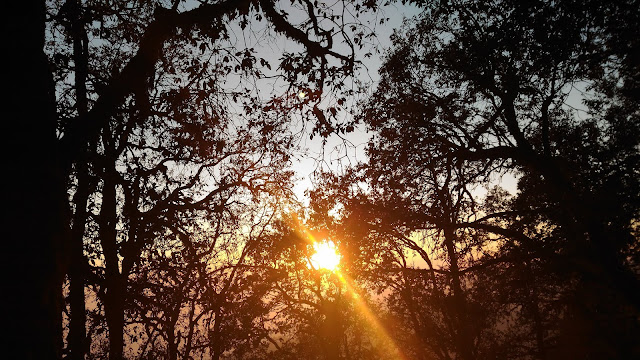 And what a better way to end a Landour winter day than a still clear Himalayan snow vista - with our dear Mum very much in the foreground. 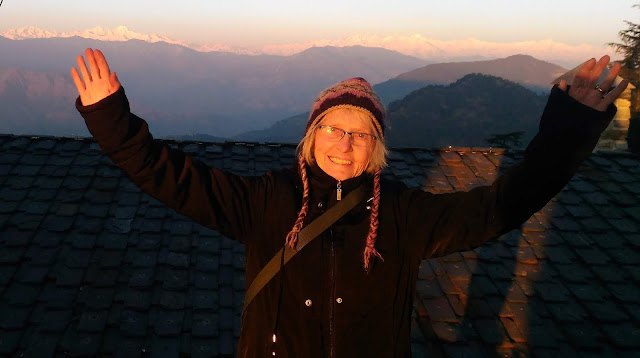 Winter in Landour can certainly be more than gloomy chill.  Thanks to the sun (and being on the sunny side of ye olde Pahar) it can be a joy.   I wish I didn't have to go back down to Lalitpur tomorrow night!
Posted by Andi and Sheba Eicher at 22:53