Words for a mother, from a daughter

Being far away from the funeral of your parent may be one of the hardest crosses to bear.   My mother tells me just how much she wished she had been with her father in his last days - and at his funeral.  But she was not able to.


When Dad died last year, Stefan and Premi sent messages which we read at the funeral.   When Amma died last week - Daisy was able to send us this message from the heart.

The picture below was taken in June this year when our families we gathered together for a special time with Amma and Appa at their home just outside Vishakapatnam. 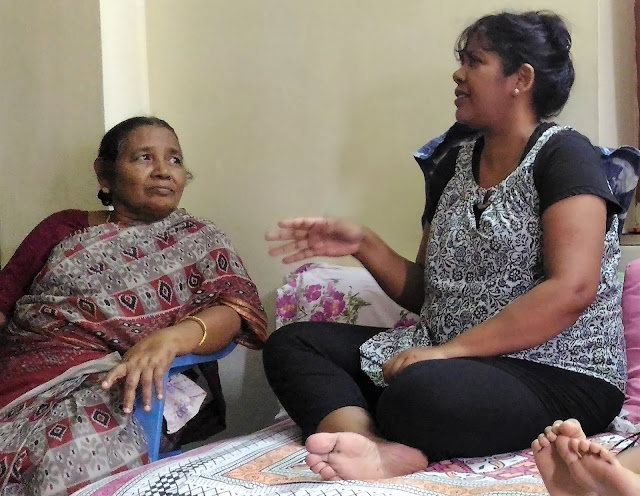 Daisy wrote this message which we received on 29.10.17 and was read out by Peter at Amma's funeral:

Today, as I was teaching Microbiology to my class, I was talking to my students about seeing the unseen and shared the loss of my mother with them along with this verse:

“Therefore we do not lose heart. Even though our outward man is perishing, yet the inward man is being renewed day by day. For our light affliction, which is but for a moment, is working for us a far more exceeding and eternal weight of glory, while we do not look at the things which are seen, but at the things which are not seen. For the things which are seen are temporary, but the things which are not seen are eternal.” 2 Corinthians 4: 16-18
The news of Mummy’s death has left us in deep shock. The moment I heard Peter say, “Mummy has gone to be with the Lord”; I heard the Lord’s assurance: “Do not weep; she is not dead, but sleeping.” Luke 8:52
If I were to describe this beautiful woman who served God’s calling to bring me into this world, it is simply this: she was blessed with Martha’s hands and Mary’s heart.
She was a God-fearing wife and mother who not only gave us physical birth but raised each of us her children to grow in God’s word, grace and wisdom. Whenever I had answered a question in my Sunday school class, my teacher would ask how did you know that? And my usual response, I learned this from my mother.
She was used by God to sow the seeds of His living word into our lives and today as she rests from her labor; her work is producing plenty of fruit wherever God has planted us in the building of His Kingdom.
Mummy was a diligent worker both at home and outside. She worked hard for more than 30 years to provide a good education for all of us. Her skillful hands have drawn knitted, embroidered, sewn, tatted, crocheted, tended plants and did everything a set of hands can do. She used to cook for an army and I never once heard her complain.
She has been a gracious hostess to have endeared her home and hospitality to both Christians and Non-Christians. She embodied all of the attributes of a perfect mom. I had the privilege of chatting with her almost every other day for past several months. We discussed every topic under the sun.
This caring, thoughtful, hardworking, compassionate, and loving lady embodies the proverbial woman in the Bible. Along with all of my siblings and church family, I celebrate Mummy’s promotion to glory.
We named our son Shofar which means trumpet, based on this blessed promise: “Listen, I tell you a mystery: We will not all sleep, but we will all be changed— in a flash, in the twinkling of an eye, at the last trumpet. For the trumpet will sound, the dead will be raised imperishable, and we will be changed.” (1 Corinthians 15:51-52)

Posted by Andi and Sheba Eicher at 23:50