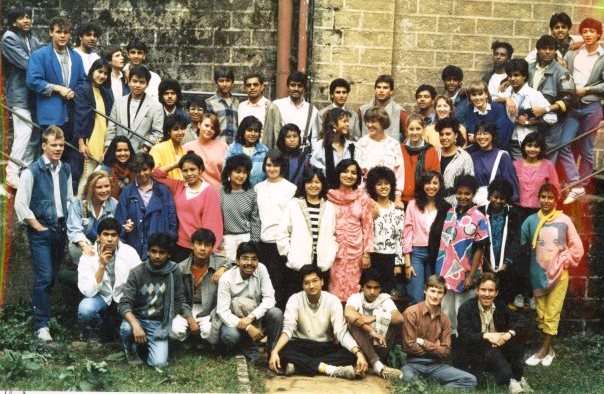 I have been blessed with several Alma Maters - but the one which shaped me the most was Woodstock School up in Mussoorie.

Today marks 30 years since the 54 of us from the class of 87 walked across the stage at Parker Hall to collect our degrees.  After filing out of the hall we stood in a line and shook hands and were  hugged by our parents, friends and teachers (not mutually exclusive sets).  Most of us had tears in our eyes - and the post-grad line was called the 'wailing wall' in our time.

And time also stands still.  I am so very grateful that my parents decided to send me up north in 1985 after I had finished my 10th at the Deutsche Schule Bombay.  Switching back to English was a joy - and the two years at Woodstock were an opening up for me - for which I am very grateful.

As heavy drops of rain fall into the darkness outside our home here on the HBM hospital Lalitpur, 30 years later, a few words looking back.

Our teachers were out of this world.  Each class I took in 11th and 12th grade was very much college level.  Problems of the Modern World with Ranjit Das.  Modern Myth with David Weidman (main text book: Lord of the Rings), Advanced Bio 2 with Max Dass (we memorized the 10 essential amino acids), European Novel with Kathy Hoffman (Darkness at Noon by Koestler stands out), German with Cherry Gough (Romulus the Great)...  the list goes on.  Our teachers poured themselves into us.  As did the dorm parents (the amazing Criders looked after us unruly lads at Hostel).  And then there were dramas and concerts, weekend hikes and the bazaar on Saturdays, the charms of Cozy Corner as we entered our Senior year and cinnamon buns thrown up to us on the balcony of the Quad art room on lazy Tuesday last periods...

A look at our year book (the first colour pages as far as I know were introduced by us in our 'double vision' themed 1987 Whispering Pine) shows one of the finest of men - Adam Azor-Smith - French teacher and life-traveller - who 'chaperoned' Anand Sinha, Steve Satow and myself on our memorable Senior year activity week to Ranthambhor National Park in Rajasthan. 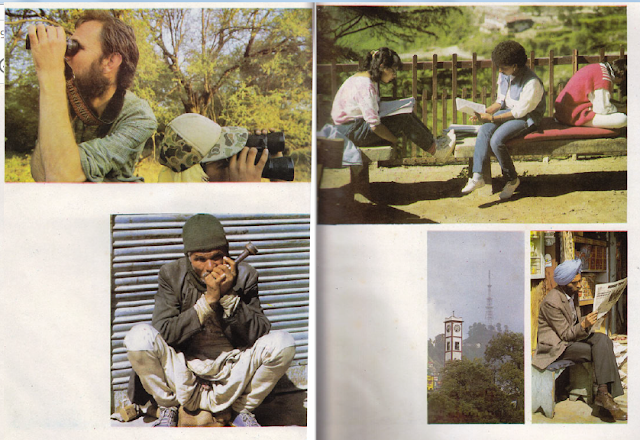 And then is the amazing experience of being brought into community.  I joined in 11th standard with about 3-4 other 'new kids' (Danny Watters, Irene Winkler come to mind).  Some of my classmates had been together since primary school.  And yet we were welcomed and made part of the bigger picture. I shared rooms over the 4 semesters with a Bangladeshi who grew up in Abu Dhabi, a Bombay-boy whose father owned an iconic hotel in SoBo, a Punjabi whose Dad worked with a large govt Engineering co, a Thai, an American mish-kid, and an England-returned Bihari.

Beyond these room-mates was a further smorgasbrod of nationalities and cultures - into which we plunged ourselves and learned to the precious gift of mutual joy through the beautiful (and some times tear-streaked) experience of building friendships.  Late night maggi noodles, long conversations with the lights out, small study groups slogging on our Bio, post-play sleep-overs, the seemingly interminable slog up the hill to school - a new world for me.  Early in my first semester I realised that I was trying to keep people out - trying to push through on my own strength.  I had a picture of myself as a miserable little prince walled in with concentric circles of barriers.  I realised that allowing others into my life was not a sign of weakness... Thirdly, I am grateful for Woodstock for allowing me to grow in faith.  Woodstock School in the late 1980s was intentionally Christian with many staff being earnest Christians.  Most students, however, were not followers of Christ - with various religious and irreligious beliefs and practices lived out by my friends.  With no Mummy and Daddy to say 'do this' and 'do that' - it was a time of discovering and living out my faith in a new way.   Having a small sub-group of friends who were also exploring what it meant to know Jesus was mutually helpful.  My first 'church' was a group of earnest guitar-strumming fellow students who met every Sunday afternoon in Bothwell Bank (a long trek far, far up the hill) for Bible Club.  "BC" was the object of much gentle derision (some of it well-deserved) but having to step out and identify who I was and be intentional about Jesus was a huge step forward for me.  It helped to have others to worship and pray with - as it does today 30 years later.  Some of the songs still echo in my mind (sing that sweet, sweet song of salvation...).

And I have not even touched upon mentors like the Satow family who adopted me, and the Hamiltons, and, and....

30 years ago today those two years of my life ended at graduation - and the seeds sown and relationships nurtured have entwined in our lives to give much so flavour and zest over the decades.

Woodstock is an essential part of the at times almost comically complex person I am - Woodstock meri jaan.
Posted by Andi and Sheba Eicher at 20:11