Reading in the new year 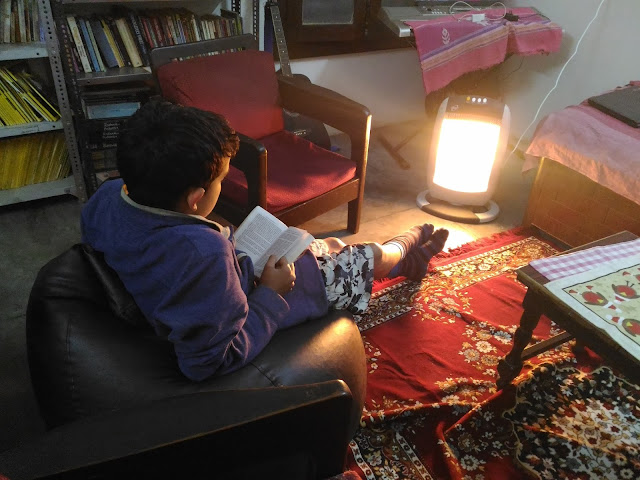 How is it possible that we have slipped into 2017?

Just before Christmas we got a room heater which has taken off the edge of the fridge that we are currently living in.  Is this the same home which half a sun-spin before seemed the best place to grill a tandoori chicken?

Well, needless to say, I am next to the said heater right now, typing these words thanks to the miracle of wifi (a slightly neurotic internet connection notwithstanding).

What better to do on a cold night like this than cuddle up near the heater and read.

So what are we reading these days?   Sheba is reading John Pollock's biography of George Whitefield (which I devoured a few months ago).  She is touched by the youth and energy of Whitefield, amidst the often debilitating illnesses faced in those days.  How could such a man preach to so many, how could a voice penetrate into the hearts of such large crowds?

Enoch is working through The Nightmare Years William Shirer's memoir of his years of reporting from Nazi Germany from 1930-1940.   Enoch says he likes to hear about people's real experiences.

Asha is reading various Jane Austen books on her kindle.  She is currently putting in about 8 hours a day of studies as she gears up for the dreaded 10th standard exams in late February.   Sheba will take her up to Wynberg-Allen school in mid Feb.

I have just emerged from a long-overdue re-reading of Is Paris Burning by Larry Collins and Dominique Lapierre.  A vivid crawl-through-the-undergrowth, dine-with-the-Boches, carreen-through-the-streets-in-your-half-track view of the liberation of Paris.  Took my breath away.  Amazing to see a small Prussian General drift into delaying Hitler's command to destroy Paris.  All the great Parisian sights were mined to be blown sky high, but der General did not give the command.

And yet for all the miracle of the Notre Dame, Louvre and Eiffel Tower still standing, for the mercies of the worst slaughter not being done, like the unspeakable horrors of Warsaw, there were still terrible tales.  The firing squads killed hundreds.  The liberators and the retreaters snuffed out precious lives as the war ground on.  The cost of liberating Paris meant that the American tanks ran out of gas before driving into Germany, allowing the Wehrmacht to regroup and holding the Allies back for over a year.

And all of this being read in the cold of a Lalitpur winter.  Printed word translated into the grime and gore of street-fighting in Paris, the sorrow of a returning soldier who meets his wife only to have to tell her that their son just died.  The delirous joy of a population who can't believe that the nightmare of the crooked cross on the blood red flag has come to an end.  The enigma of De Gaulle.  A different world brought to life through black and white.

Each book takes you to different worlds.  What a pleasure there is in the printed word.  All hail the writers.  May the tribe of word-smiths increase.

Mean-while the young Eichers - and elder ones too would be more than happy to have new and old books wing their way out to L-pur.  There is always more space on our shelves - and in our hearts.