Thirteen years in between the two dates.

Each year Feb 19th is special for us.  Special because our own ‘Special One’ was born on that day (along with the venerable Chattrapatti Shivaji Maharaj) – Enoch Anand Graceson Eicher.

Each year we celebrate.

And each year there is a bit of a different Enoch.

But this year – perhaps more than the previous ones - we are seeing someone that we have not met yet. 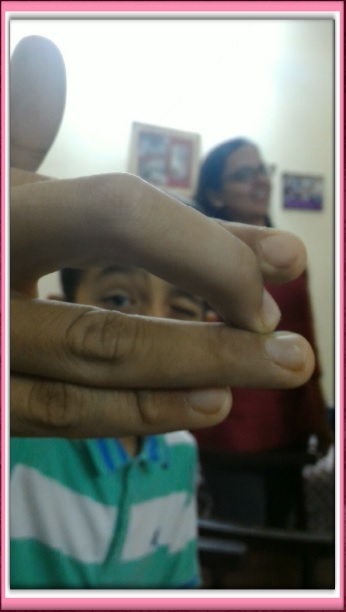 (picture per kindness of Dr. SP Mathew – most of the pics were taken by him)

Welcome to teen-aging Enoch.  Enoch in transition.  Enoch the new and being shaped.

As a house-fellowship we had ‘home-work’ last week.  Our task?  To memorise 1 Corinthians 13.  The chapter on love.  “If I speak in tongues of men and angels, but have not love, I am nothing…”

Well.  There we have it.

It sure is exciting to see work in progress! 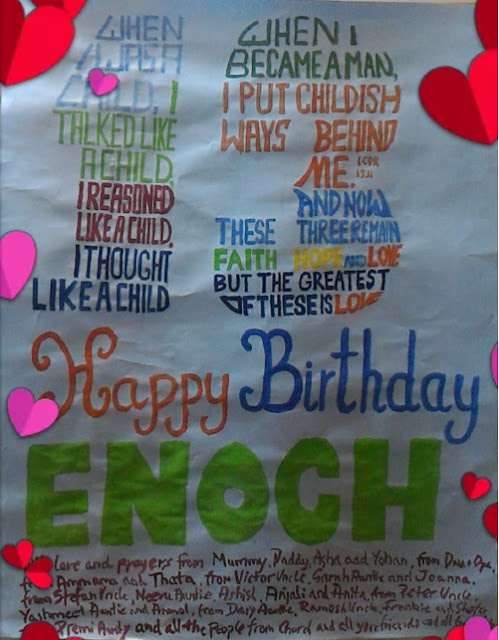 Now, we know that as a family we like to celebrate birthdays (half this blog seems to be documenting them it seems).  But this year we had a stripped down time.  Only three families involved.  The extended Eichers of course (Oma and Opa flew in the day before).  And Drs. SP and Vinita Mathew with Mark and Nancy (2 of their 3).  And at the end of the evening we were joined by our dear John and Nalini Gabriel with their super twosome of Nikita and Jasper.

We started the day with prayers and simple gifts as a family of seven…. 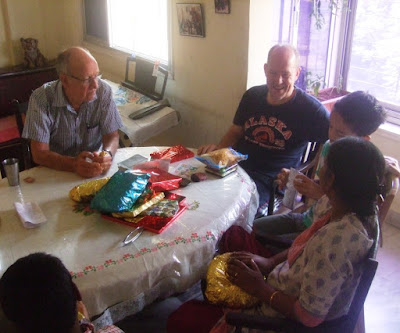 … and we ended the day with prayer and games with the other two families.
And in between there was cookin’ n bakin’ (courtesy of Sheba) and some cake shapin’ too [Eicher traditions die very hard]… 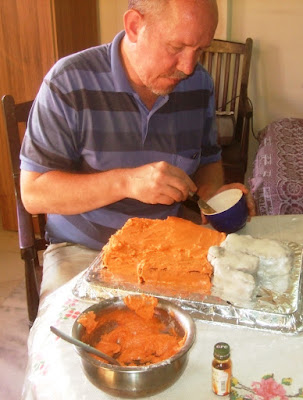 This year’s cake was a deliciously light chocolate cake that Sheba whipped up in the morning – and then late afternoon yours truly did the honours of making it into a shape. 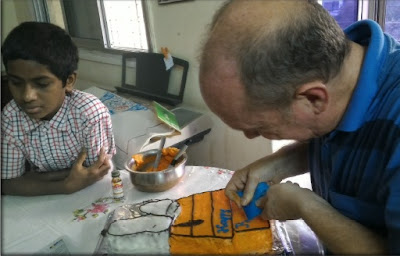 As a family we really enjoyed seeing the “Peanuts movie” in one of our rare visits to the theatre, so Snoopy got the honour of gracing Enoch’s cake.  His red dog house was a bit chromatically challenged (the red colour had dried up…) with an ersatz orangeish shade filling in – but Snoopy still slept soundly on top of his roof… 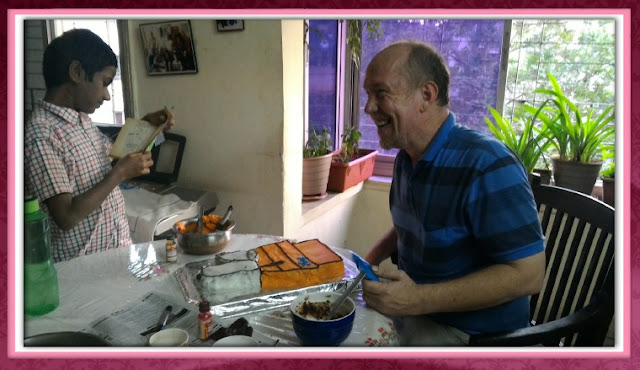 You can tell by now who likes the ‘kiddy stuff’

And the final product: 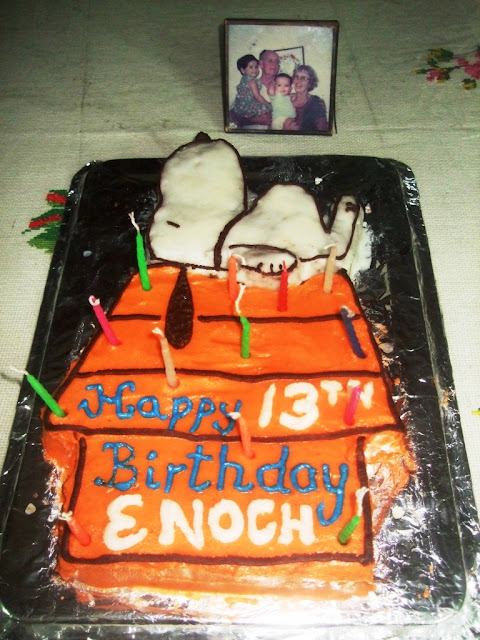 Enoch’s good friend Mark came – along with his younger sister Nancy (how she has grown!) and their lovely parents Dr. SP Mathew and Dr. Vinita.

What a family – one of a kind in so many ways – and such loyal friends over the years.  You get dizzy when you see all that Mathew and Vinita do. Besides running their lovely Ashok Hospital in Dahisar (and planning a new whole-person-care expansion soon), this couple have spear-headed the home-schooling movement in Mumbai, been involved with local environmental activism, networked among doctors – both for EMFI as well as the Borivali Medical Brotherhood, taken various leadership in their local church including hosting a ‘life-group’ in their home and been really good friends to us.

We couldn’t have our friends come from far off Borivali and not have a game or two – and this time Oma and Opa were also involved.

The task:  to be the team which first put together a ‘museum exhibition’ of 13 different items ranked in a particular order and listed in a ‘museum catalogue.’

Good fun was had by all:
The “Oh Yeah” team in action – times are obviously tense in the museum world… 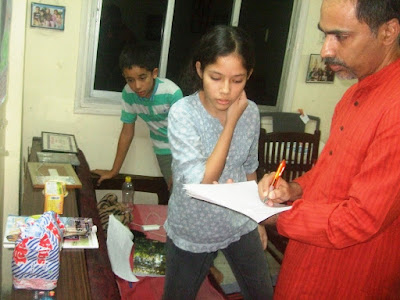 While on the other side the “Ancient Findings” team was also working up a storm of cooperation together: 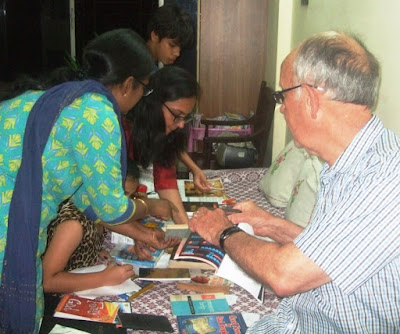 The end products?  Fun discoveries of what was available in the house and the (sometimes challenging) joy of working together to solve lots of little problems and achieve a common goal.

Here we have Dr. Mathew guiding us through an exhibition of objects ‘from living things’ (the bulk of which ended up being sourced from the inside of our fridge!). 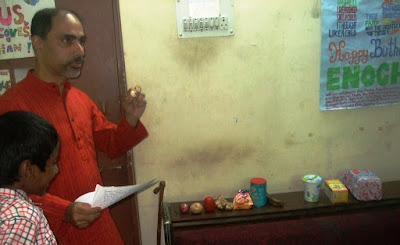 It is always good to pause and reflect together in thankfulness to our wonderful Lord Jesus.

By His grace and mercy, we have seen another year go by.  For all of us.  And by His love and faithfulness we are able to move forward (often painfully slowly) as a family.  And by his care and mercy we are seeing Enoch make some of the first steps into adulthood.

Speaking of ‘leaving childish ways behind’ – we want everyone to ditch the selfish, whiny, petulant childish bits of us – while retaining and growing in child-likeness.  We want to have less complaining and more wonder.  Less grabbing and more giving.

Birthdays are good measuring sticks – excellent times to look back and see what God has done in our lives so far – and how much further we must quest on in pursuit of His imprint being seen more and more in and through us. 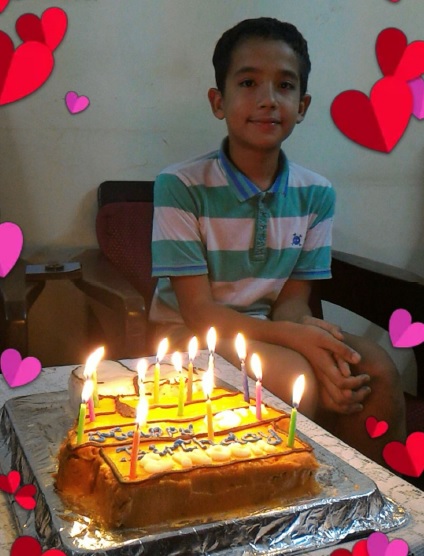 13 years to the day on which I had the privilege of being with Sheba in the operating theatre as Enoch was being delivered by C-section at Lok Hospital in Thane. 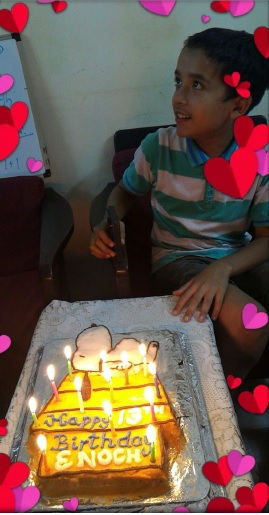 The good ole B-day song was duly sung and candles blown out and the knife drawn to chop up it up for happy consumption (married with mango ice-cream) by all and sundry. 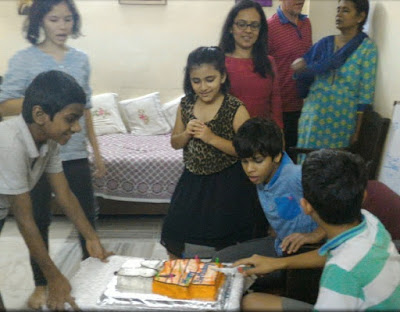 And this is all that remained in the end: 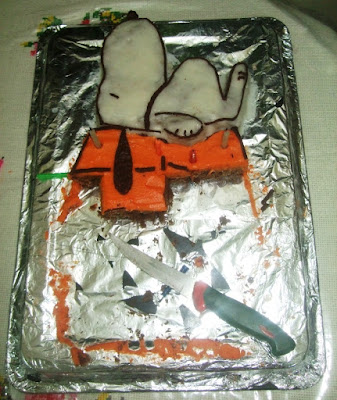 It was time to for the Mathew family to go – not all however – as Mark stayed over for a sleep-over with Enoch. So a photo of all of us was definitely in order (taken by Mathew himself hence his absence from the frame). 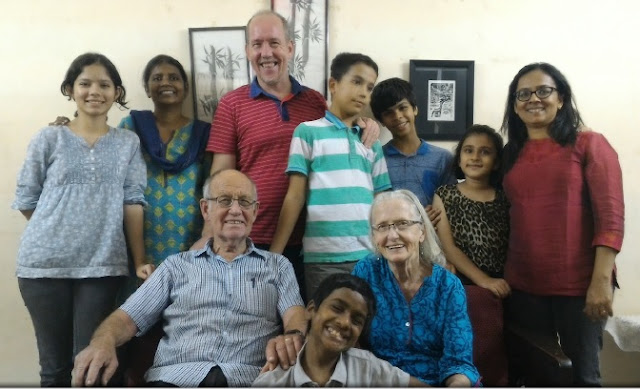 Just after they left, the second half of the party came.   John and Nalini and their sprightly daughters Nikita and Jasper had arrived.  John flew in from his day trip to Chennai – and the local traffic jams did the rest so we had party mark 2. 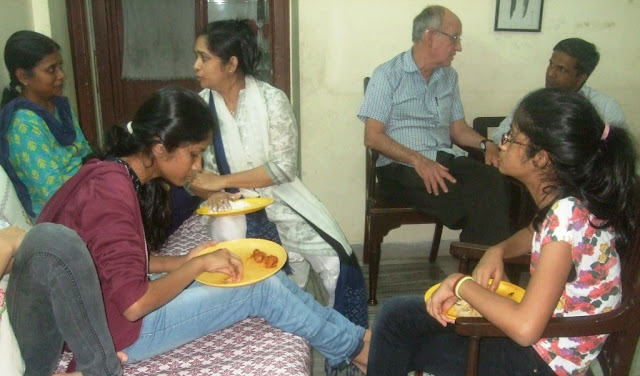 It was past Yohan’s bed-time (his medications need to be taken at 9 and since they are quite heavy we have him go to sleep by 9.30) but the rest of the young folks were up to a game of monopoly while the parents (and grand-parents) were chewing the fat together. 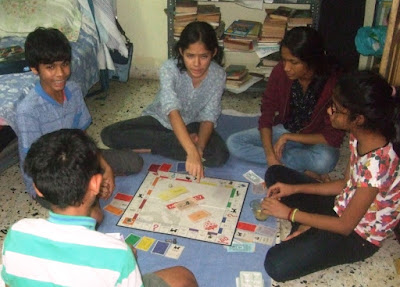 And even then the party did not end.  Enoch and Mark had a sleep-over to take care of.  So after John and family had headed off, and Oma and Opa had gone over to Happy Valley for their shut-eye, three youngsters (one of them bald) were locked in a world-conquering game of Risk.

A long day’s celebration came to an end at with armies poised to conquer at an unearthly hour – but alas a communication not received meant that all three lads were well past their bed-times… the unilateral cease-fire had the 3 whisked off to their repose.

The rays of the morning light on the 20th saw this scene: 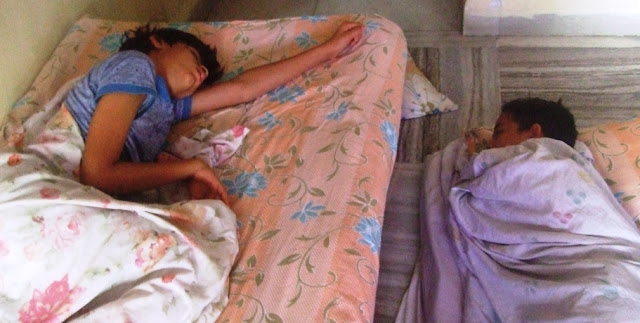 Welcome to your teens Enoch.   Thirteen is just the beginning.
Posted by Andi and Sheba Eicher at 12:59