Butterflies on the Roof of the World


Last night Sheba told me to take a day off.  I did.  And what a beautiful day it was.
After a sleep-in till 9, a leisurely breakfast with Sheba, Amma and Appa I had a few errands to run (our Nano has developed a rather nasty rattle so off it went to the service station).  But then off I went into the wild blue yonder.

We are so blessed to be right next to the Sanjay Gandhi National Park - a total treasure of a place.  Just after noon I was walking up the trail to the ridge of the Pokhran Hills that straddle our part of Thane.

It was hot and dry, but I had layers of sunscreen and a hat and a water-bottle.  And I was rewarded with the fire-cracker flowers of the Silk Cotton tree  (Bombax ceiba) greeting me at every turn as I put distance between me and the city. 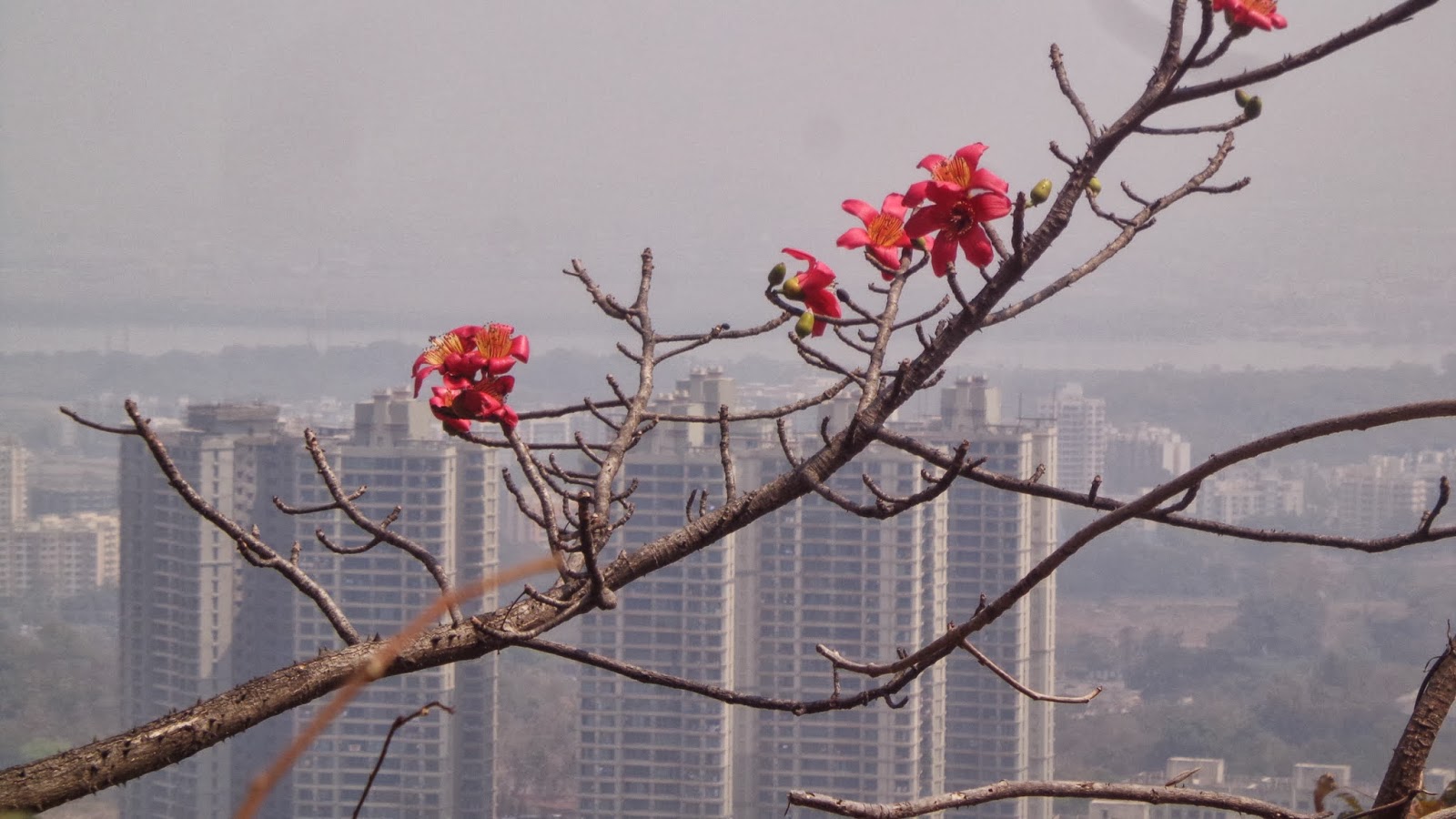 Once on the top I was back in Narnia.  Not a single person around.  I wandered along the ridge, past the point we normally stop at, and further up.  The silence was complete.

On one side I could look out over the hazy clumps of skyscrapers that land-hungry Mumbai has caused Thane to break out in.  On the other side only hills and forest and the odd small rain-fed field that some of the park-dwelling adivasi inhabitants cultivate in the monsoons.

More red flowers beckoned - this time the 'flame of the forest'  (Butea monosperma). 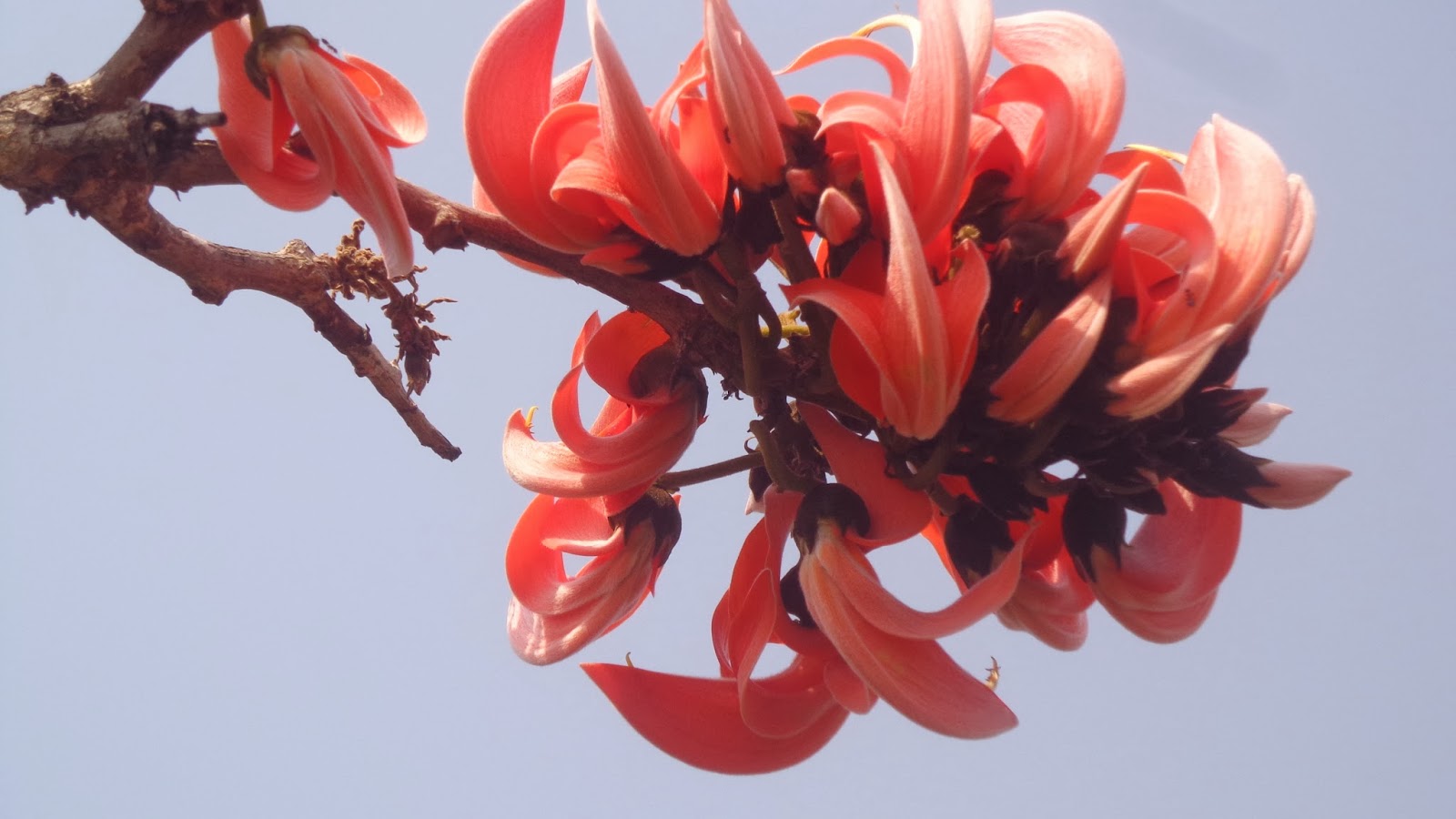 I was looking for my own private cathedral.  Walking further up the ridge in the quiet of the hot noon, it was shade that I was after.  I found a new spur going due west and decided that it was time to leave the beaten track.

Off into the woods I wandered until I found a shady spot, cleared the rocks, set out my blanket and got ready for an afternoon of rest.   This is what I had to look up too as I lay down: 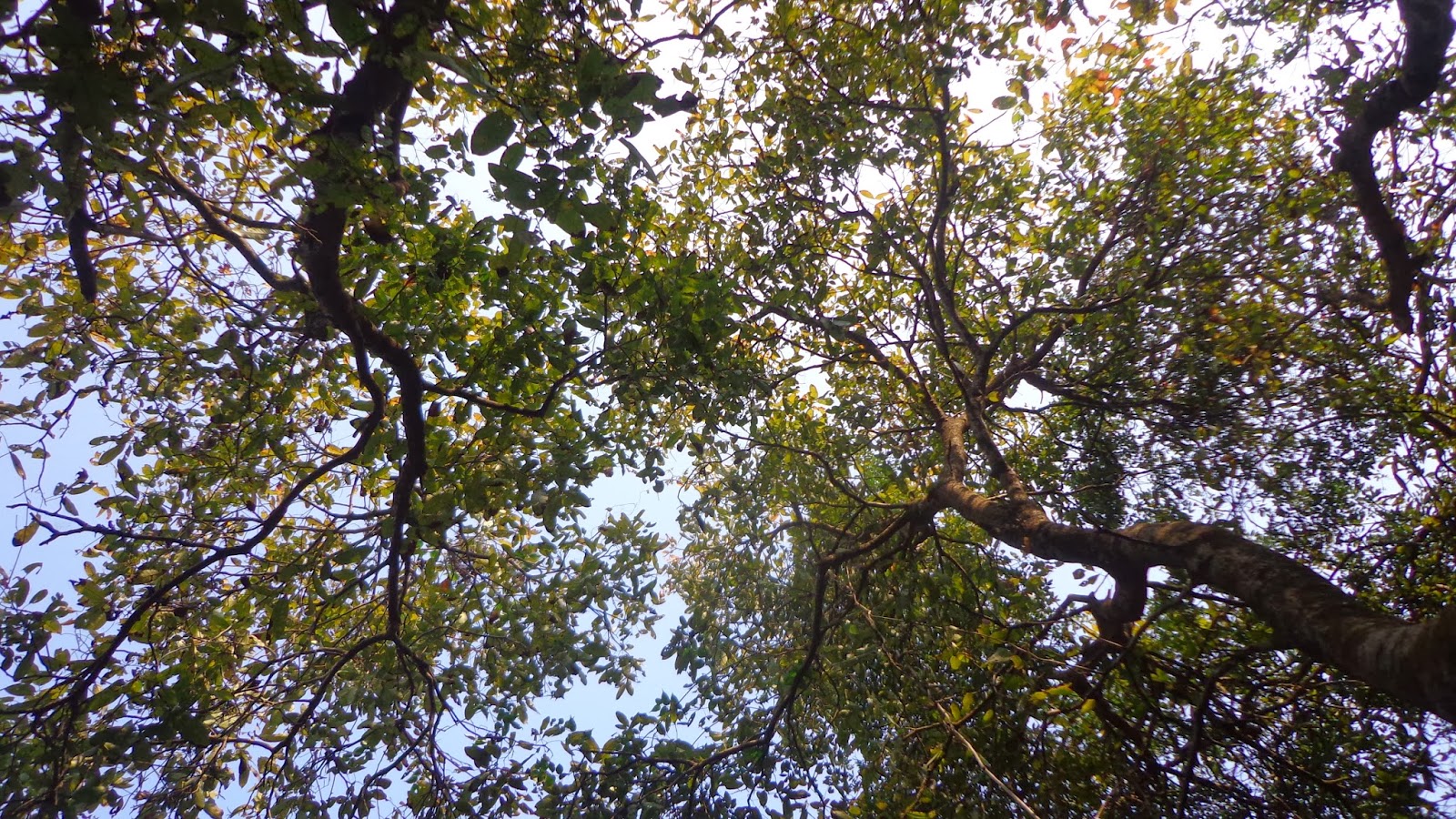 And this is the delightful book that I had to take me to another place and time as the sun travelled from its apex down toward distant seas in the west.

Sheba had told me not to do any deep thinking.  I complied gratefully to her loving advice.  Hence a book that Dad gave me for Christmas - seen here with my excellent lunch of 2 Mussoorie-Prakash-Store-Peanut-Butter-and-Stawberry-Jam Sandwiches and Barfi from Enoch's 11th birthday.  One of the sandwiches had already happily made its way into my innards and the leaf had fallen from my shade-tree when this shot was taken: Butterflies on the Roof of the World tells the story of Peter Smetacek - whose father came from Silesia (a largely German-speaking part of what is now the Czech Republic) as a refugee fleeing the Nazi occupation just as WWII broke out.  Finding himself in Calcutta he started a new life here and ended up living in Bhimtal in the Nainital district - close to where I had done my field research for my forestry studies in 1993.

Smetacek senior was wild about butterflies, and moths.  And his son Peter took up this wonderful avocation from when he was 2.5 years old.  The book is a delight, taking you through a magical childhood and winging you across the country (especially in the Western Himalayas) in search of these amazing insects.

Dad had met Peter last year at the Mussoorie Writers Festival that Woodstock School hosted.  Along with Dad's Kodai school mate Romulus Whittaker (the 'snake man') and other distinguished out-doors-men-and-women, Peter had read out from his book which mapped out his passion for butterflies.

Dad had collected butterflies in his Kodai school days and donated his collection to Eastern Michigan University.  He gave his prized butterfly books to his alma mater - Taylor University.  Years later, when I was a student at Taylor I actually found 2 of them as they were being discarded from the library!  I retrieved these beauties and brought them back to Dad.  He in turn decided last year to give them to Peter when he met Peter and heard about the Butterfly Research Centre that Peter runs.

So Peter gave Dad two autographed copies of his memoir.  One of which I devoured this afternoon.  The other of which Dad is just coming to the final chapters of in Mussoorie.

I came down the mountain after having travelled into new worlds.  The flapping flitting creatures are their in my minds eye.  Peter's motor-cycle adventures across the Himalaya are also there with me.  I spent an afternoon in total silence other than the birds around me.

As I left my jungle hide-away I came across this gift next to the path: 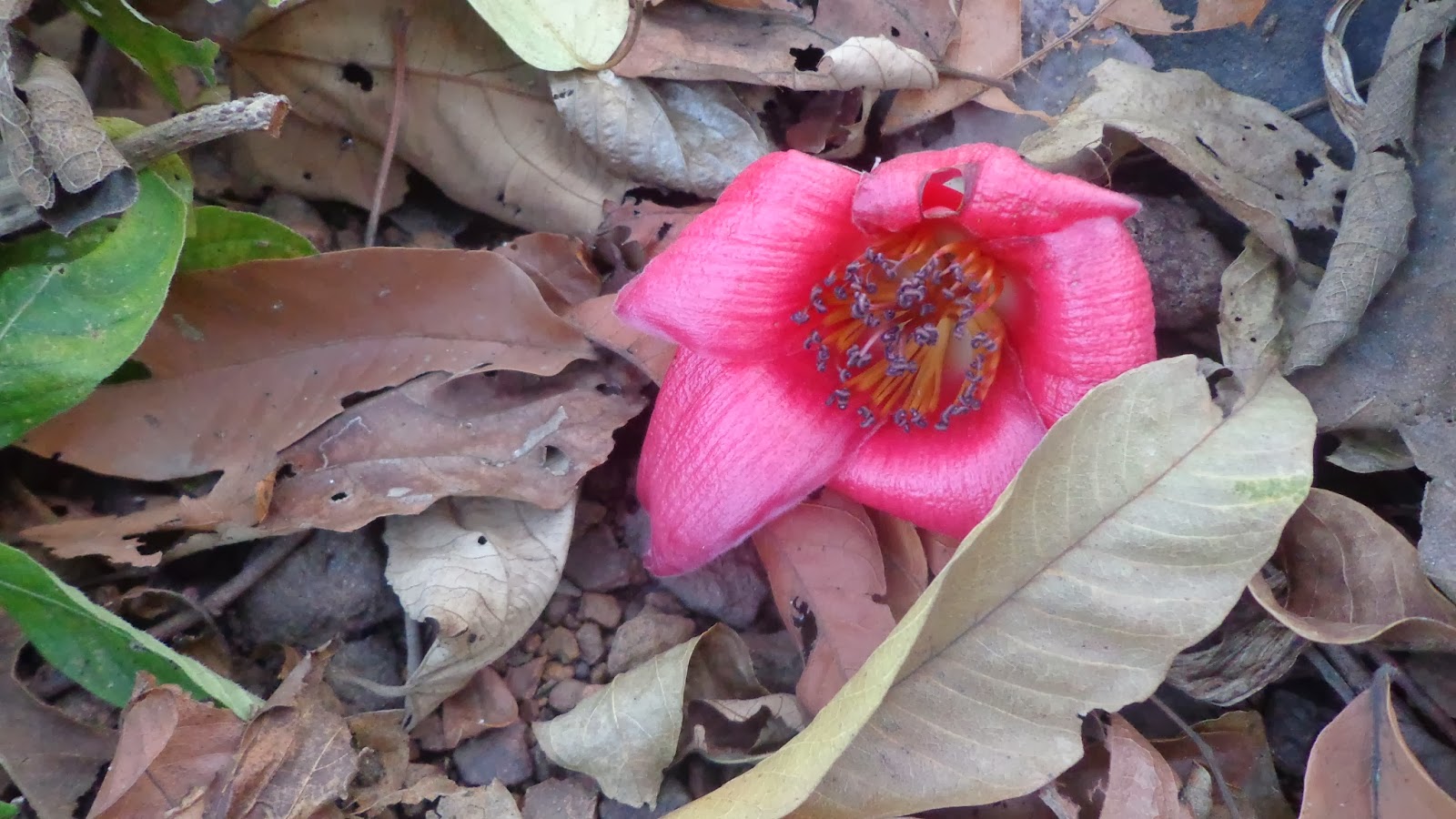 And then it was good-bye to the trees and the sky. 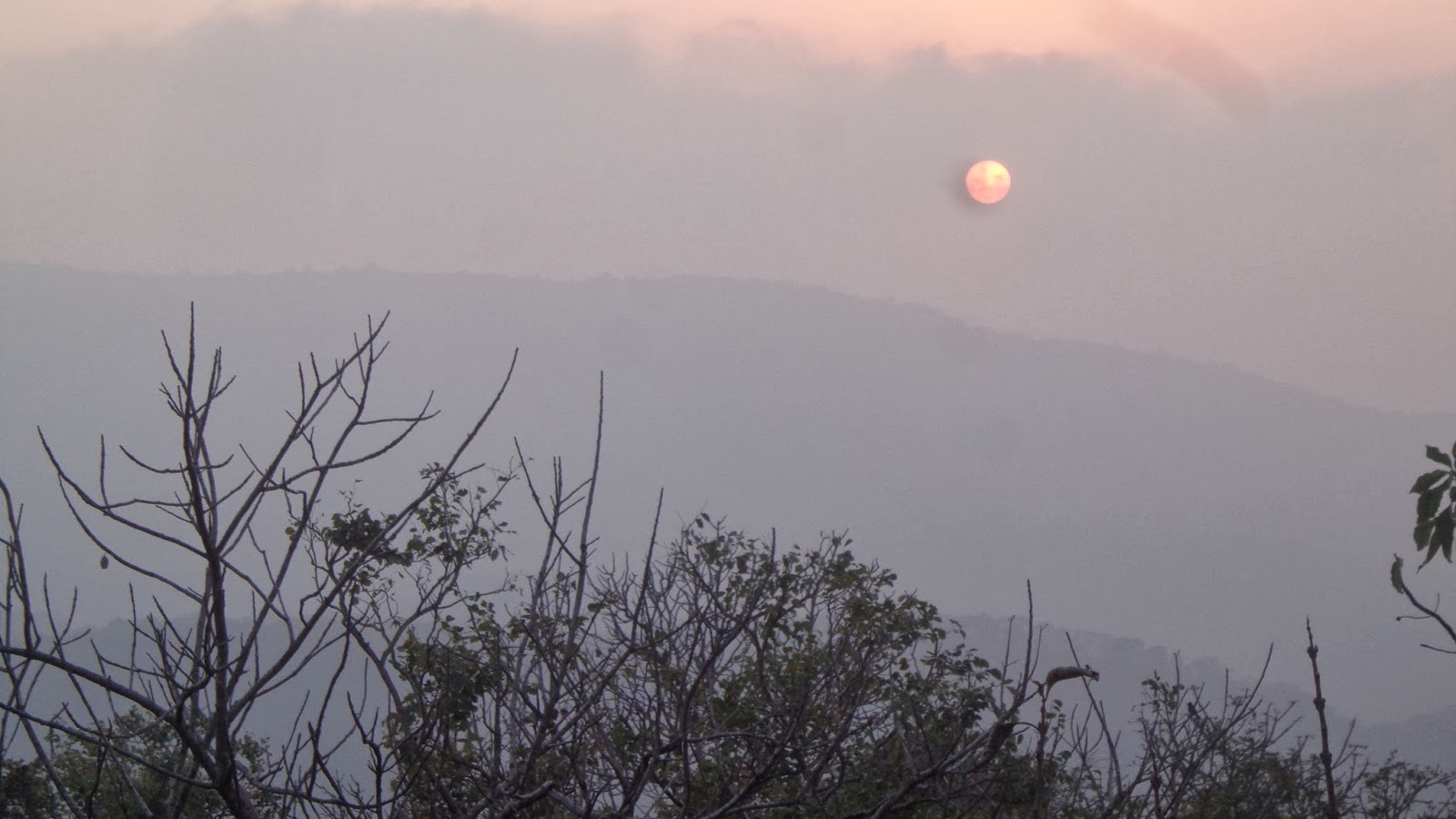 And hello to the joy of the city. 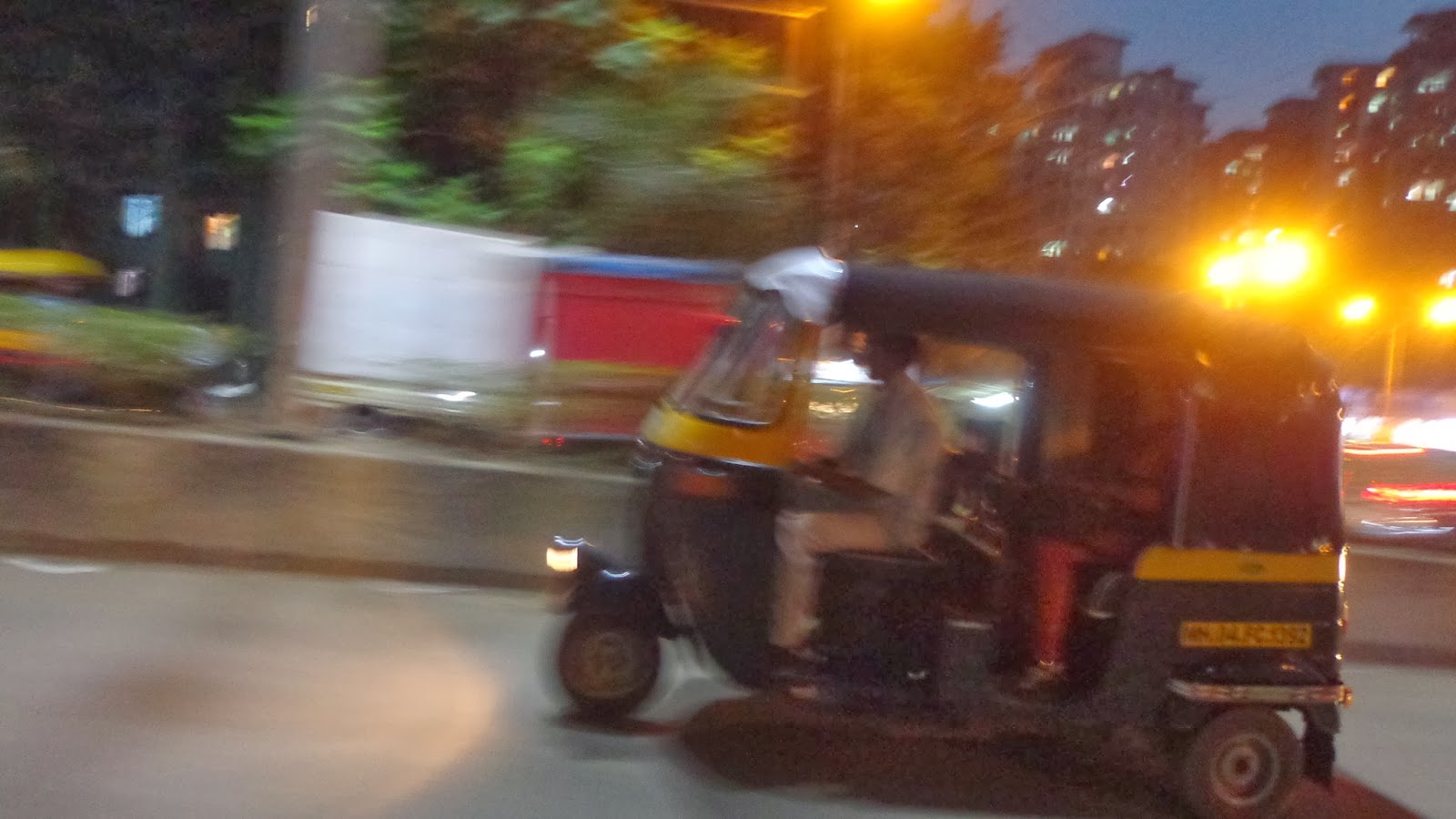 I have come back refreshed - blessed by a wonderful wife who has gone out of her way to feed my soul.  I take precious bits of the glory of creation along with me, images flickering in my mind.  A quietness and joy in my heart.  And am very thankful.

Posted by Andi and Sheba Eicher at 23:19