Casteing stones (and other reasons for trains to be cancelled)

I was with Sheba at our local supermarket, buying things for the home and food for my journey back to Lalitpur tonight.

5.35 PM and we were checking out, planning to have an early supper with Mum and Dad and the kids and then do my last minute packing before leaving the home at 11 PM for my 12 AM train back to Lalitpur and the next 2 weeks again away from home.

Then my mobile beeped and I saw that it was our good friends from the railways.

Opening up this is what a read:

Train No 11057 has been cancelled due to unavoidable circumstances.  Inconvenience caused to passengers is deeply regretted.

Well that was my night train.  The one whose ticket I had booked 2 months ago so that I could spend the weekend here and be in Lalitpur on Monday.  No train to board now.  I am very much here in Thane, tapping on the keyboard late at night while the family is blissfully sleeping (and a shade happy that I am not off to Lalitpur I guess...).

So what are the 'unavoidable circumstances' that caused the good folks to cancel the august Amritsar Express that I was to board in a few minutes from now?

Well, its a small matter of utter chaos in the BJP-ruled state of Haryana.

Take a look at this fine picture taken by our good friends at the Indian Express: 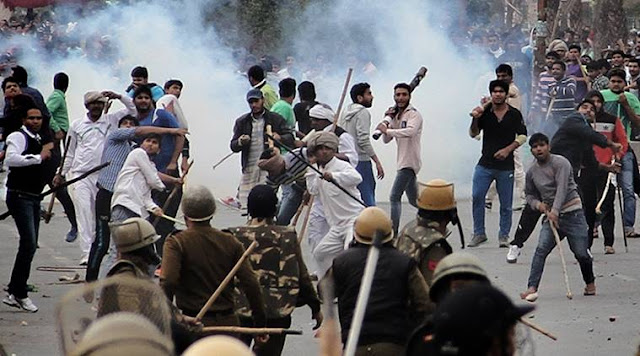 Who are these people?  Well, they are the Jats my friend!  Or at least people claiming to represent the Jats.   Another group of caste-based folks who feel that their 'community' has been left out of the affirmative action 'reservation' pie - and so they are hell-bent on making sure that they will get their piece of the pie.

When their 'demands' are not met, they do the 'normal' thing to do these days.  You block the streets, smash up cars and loot, burn homes of ministers, torch police stations...  the police then fire at a few and you have some 'martyrs' to push folks forward... and then the 'agitation' spreads and finally the big people meet your leaders and promise you this and that.

We have seen this  before of course...

There was, and still is, the issue between the "Meena" communty and the "Gujjars"

Here are some shiny happy people blocking a main rail line and milking our country of Rs. 2 crore lost due to their antics: 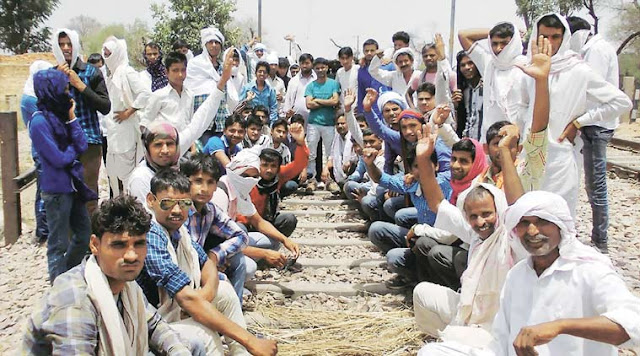 Its a happy day for most folks it seems...  some seem clearly on the juvenile side, but then again, never to early to start grooming the leaders of tomorrow eh?

And then there was the kerfuffle in the great state of Gujarat - where everything is supposed to be golden and all the lights shine all night because of the wonderful administration and all-round brilliance of our current national leader...

But who should pop up but Mr. Hardik Patel and the Patidar agitation... to get more reservations or something to that effect.

Yes Beta, you bring everyone together and shout, and then if demands are not met, then let the boys out... 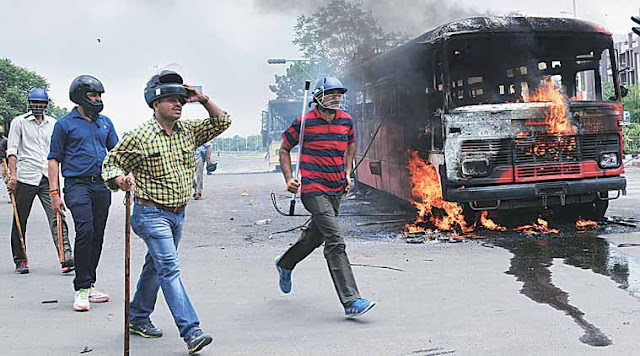 The Indian Express says that this shot is of 'policemen' patrolling in the outbreak of rioting from the Patidar protesters.  Interesting uniforms and equipment for 'policemen' - look more like the rioters themselves, but then, who are we to quibble about little things like this.

The article title says it all: "Who are the Patidars and why are they angry?"

Wasn't none of this supposed to happen with the current dispensation who are ruling from Delhi?  All those 'bad years' of 'dynastic rule' was being swept away by the 'Achhe Din' that our dear leader was bringing with him from his beloved Gujarat!  A strong patriotic government calling on all people to work together, the achieve the good life we all want?

Instead, we have a depressing pattern.  Protest.  Burn.  Loot.  Then have your 'community leaders' ushered in to meet the high and mighty.   Instead of being given a bill for the damage to our nation - and being told to pay up or rot in jail - they perpetrators get a handshake and a sizeable chunk of their demands being given to them...

Which means that the next 'aggrieved group' is getting ready with their agitation too...

The current chaos in Haryana has meant that the Army had to be called out.  For crying out loud - the army!  Don't our men (and women) in uniform have other things to do than riot control?  What happened to the various levels of army police constabulary?  One thing is sure - we as a nation are swinging ever closer to moral bankruptcy on the part of our rulers.

And so we are 'blessed' with these folks as our 'rulers' and 'leaders'  (from this afternoon's 'taaza khabar'): 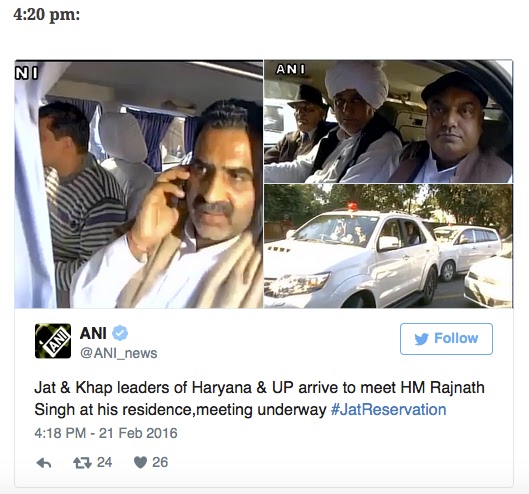 A wise Frenchman (ok his name is Joseph de Maistre) said this 200 years ago: ... que toute nation a le gouvernement qu'elle mérite  We would say "every nation gets the government it deserves."

We live in scary times.

But one of the perspectives on all of this comes from the Bible.   After all, there is a long sweep of human history - and we have some pretty nasty folks who have cropped up over the eons...

Scripture talks about how every leader will be held accountable for what they have done.  There will be an accounting - and it will not be a meeting with our home minister.... before the great white throne, the books will be opened, and every deed will be read out and justice will be done.

My reading yesterday in Deuteronomy was of a very different vision for leadership than what we currently have in our dear Bharat Desh.

Look at the vision for what the Hebrew King was supposed to do ... and be:

[The King] must not take many wives, or his heart will be led astray. He must not accumulate large amounts of silver and gold.

When he takes the throne of his kingdom, he is to write for himself on a scroll a copy of this law, taken from that of the Levitical priests.

It [his personal copy of the law] is to be with him, and he is to read it all the days of his life so that he may learn to revere the Lord his God and follow carefully all the words of this law and these decrees and not consider himself better than his fellow Israelites and turn from the law to the right or to the left. Then he and his descendants will reign a long time over his kingdom in Israel.   Deut. 17.17-20.

Woah!  A lot to chew on there - and so much that would set our nation right-side-up if it were implemented here.

In the mean-time, ours is to do and pray and speak out and read and talk with each other and do and pray some more.

And for me, I have to try and get tickets to go up north back to the Harriet Benson Memorial Hospital in Lalitpur!

Posted by Andi and Sheba Eicher at 01:00