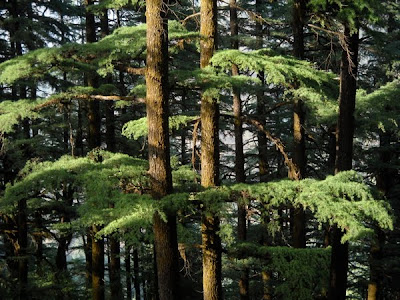 It was summer and the missionaries retreated to the hills.  Two months for the ladies.  A relaxed time with children whose boarding schools were in session - but allowed the mission kids to live with their mothers.  The fathers and single men joining the parties for the final month of the 'hot-season.'

The hill station that summer was at its cool and blessed best.  Evening walks around the top of the hill were a delight, with majestic cedar trees covering the northern side of the mountain - and occasionally a breath-taking view of the high snow-clad peaks in the distance would break through the haze.

One group of missionaries shared a large rambling bungalow perched on the very top of the ridge.  Its many rooms offered plenty of space for different families and singles to stay - and in the hot season it was bursting at the seams.

Every evening the missionaries settled down for dinner together in the slightly austere (this was a faith mission after all) but jolly dining room of the bungalow.

Who would have known that this meal would be any different from the many dinners enjoyed together before it?

In the course of the dinner there was a sudden hullabaloo outside.  Local people were shouting - telling that some 'European' lady had fallen down the hillside and was injured - maybe dead.  Could she have be one of them?

A search party was immediately formed and the men went out with the locals to find the stricken woman.

They found her.  And they found out a lot more.

She was one of them.  She was the missionary wife of a man who had been sitting at their table.

That evening the couple had gone together for a walk.  He and she came close to a cliff.  He pushed her over the cliff.  He then walked back to the bungalow and sat down for the meal with the others as if nothing had happened.  But something had.

Amazingly his wife was still alive.  But the murder-attempt had taken its toll.  She had broken her back.

The whole story came out.  He was having an affair with a single missionary lady.

All three were dismissed by the mission and asked to go back to their home country.

But the story does not end here.

The lady who had been pushed over the brink recovered from her broken back.   But she recovered in a far more profound sense as well.  She forgave her husband.  They were reconciled.

Eventually - after some years - they returned to the land where they had been called to serve God.  And served their for many years before their eventual retirement saw them return 'home.'

This is a true story that took place during the time when my grandfather served as the superintendent of his mission.

As many of us consider the statement of Jesus 'Father forgive them, for they know not what they do' (Luke 23.34) we know that His miracle of forgiveness - can and still does - open the lives of many to true healing and wholeness.
Posted by Andi and Sheba Eicher at 10:23